Nobody really knows what smoking pot does to your lungs

You shouldn't assume smoking a joint is harmless. 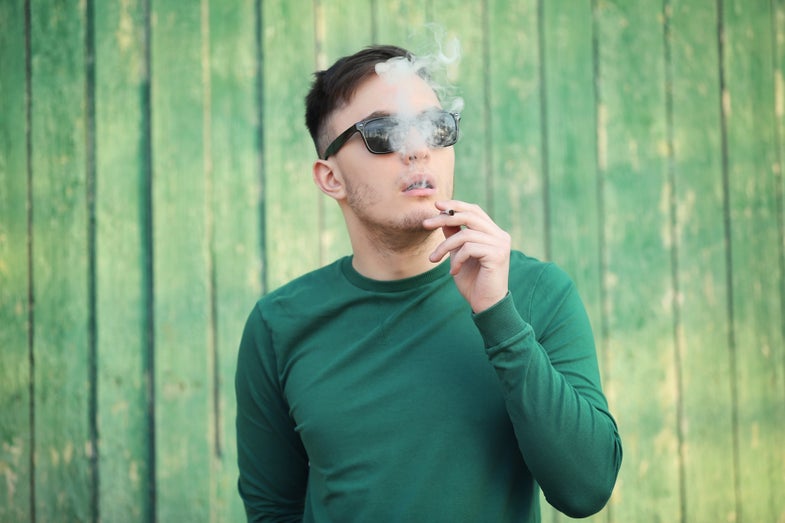 In case you missed the news, Canada legalized marijuana last week, leaving the country’s 13 provinces and territories to each figure out how it will be sold in their jurisdiction, and pot users across the country wondering how they’ll buy it—legally—for the first time. They aren’t the only people with questions: researchers are wondering about the move’s potential public health effects, specifically in regard to the canonical way to ingest marijuana: smoking a joint.

Smoking is bad. Even smokers know this is so. In the years since the Surgeon General’s infamous 1964 report, billions of dollars have been spent making sure physicians and members of the public are aware that they’re unhealthy. You may not have the same opinion of marijuana, whether medical or otherwise—but researchers say that the health impacts of smoking pot warrant the same kind of consideration. In a new commentary published Monday in the Canadian Medical Association Journal, researchers Wan Tan and Don Sin make the case that we need to know more about how smoking weed affects the lungs.

Many people view marijuana as “a relatively safe drug,” they write, and there’s a lot of literature out there touting its health benefits and safety. But there are also concerns that there hasn’t been enough scientific research to really define the health problems that marijuana might present. Tan and Sin are specifically concerned about smoking the drug, and note in their commentary “that the overall health benefits of ‘medical’ marijuana have been overstated and the drug’s harms understated, as was the case for tobacco cigarettes before 1964.” That was the year that the United States Surgeon General issued a report definitively linking cigarette smoking and cancer. It’s seen as a major turning point in public health.

“We weren’t sure that the public actually knew some of the concerns that the scientific field had about greater use of smoked marijuana in Canadian society,” says Sin. “There’s been very little good research about the health impact of marijuana smoke on the lungs, which are the first point of contact for smoked marijuana.” Our lungs are efficient vehicles for substances to get into our bodies, which is why many drugs (tobacco included) are frequently inhaled as smoke or vapor. Other methods of ingesting marijuana don’t specifically concern Sin in regards to the lungs—he says edibles, for instance, will likely have little-to-no-effect on lung tissue.

The lack of research is associated with historical stigma, Sin says, in Canada as well as in the United States. In the U.S., of course, marijuana remains a Schedule 1 drug, even though numerous states have legalized it for personal or medical use. According to UCSF professor Stanton Glantz, the American research community has been asking the federal government for easier marijuana access for a long time. “Even if they want to keep it on schedule one, which is frankly ridiculous,” he says, researchers have been saying the government “should at least have some exception that makes it easier to do research on it.”

Given how widespread marijuana use is both in the United States and in Canada, there’s reason to call for more scientific inquiry. Biochemically, marijuana “is very similar to tobacco except for the active ingredient,” Sin says. In marijuana, it’s THC. In tobacco, it’s nicotine. But most of the other stuff in cigarette smoke is in marijuana too, he explains. That includes substances like formaldehyde, ethylene, and acetone. In Canada, at least, those substances have all been part of a graphic cigarette labelling campaign for almost 20 years.

There are more than 4,000 chemicals in tobacco smoke, Sin says, and nicotine is only one of them. Same goes for marijuana smoke, which has 4,000-5,000 chemicals in it, he says. Those non-THC chemicals potentially have tremendous impact on the lungs, just like cigarettes, he says.

“It is generally true that marijuana smoke is just as toxic as cigarette smoke,” Samuel Wilkinson, a resident physician at the Yale School of Medicine, told Popular Science in an email interview. “However, generally people expose themselves to less marijuana smoke,” he wrote. “It’s rare that someone smokes 20 joints per day, but it’s common that someone smokes a pack per day of cigarettes, which is 20 cigarettes.”

But while 20 joints per day does sound pretty implausible, Sin does worry that legalization will encourage more users to smoke heavily. Marijuana is known to be a potentially addictive substance, and it’s certainly a habit-forming one for some users. “Potentially many of these smokers will become perpetual smokers or constant smokers,” he says, though it’s impossible to know just how widespread such an uptick would be. There’s also the question of how habitual pot smoking, even at a rate that feels harmless to the smoker, might affect the body over the course of a decade or two. Because of the lack of research, such risks are poorly defined.

With the legalization of marijuana in Canada, Sin says, researchers there “have a tremendous opportunity, if not an obligation,” to study the substance and try to understand its effects. Easier access from a government-policed supply is likely to help, he says, partially because with legalization comes standardization, meaning Canadians—and researchers who study them—will have a better idea what they’re smoking. “With further research, the mysteries and myths behind marijuana can be resolved,” Tan and Sin concluded.