All aboard the nicotine train. 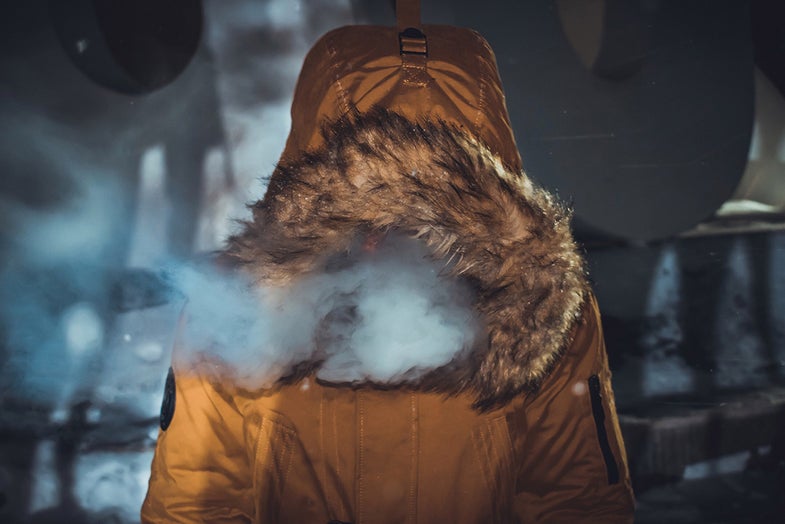 Ever since they came on the scene in 2006, electronic cigarettes, more commonly known as e-cigs or vapes, have been the subject of a rather lethargic debate. Do these products, which vaporize liquid nicotine in favor of burning tobacco for a fix, provide a healthier alternative to smokers looking to quit? Or do they serve only to tempt those who would otherwise never get addicted to nicotine at all?

According to the most extensive scientific report on the subject so far, gathered by the National Academies of Sciences, Engineering, and Medicine at the request of the FDA, the answer is—well, both. Maybe. On the one hand, it seems clear that on several metrics the electronic products are better for one’s health than combustible cigarettes, and there’s evidence that they can help some adult smokers quit. On the other, there is strong evidence that vaping appeals to kids and teens, and the new report finds that these users often progress from e-cigs to combustible cigarettes. With just a decade of data on e-cigarette use, we have no way of knowing how lifelong vaping habits will affect the health of these young people, which is to say nothing of the obvious health effects they’ll suffer if they turn to traditional smoking instead.

Public health experts find themselves in a tricky situation: according to population models designed for the report, e-cigarettes might cut down on the number of adult smokers, at least in some circumstances. In the short term, anyway. In the long term, the young users these products attract will suffer health consequences.

“It comes down to this trade off between definitely hurting kids to maybe helping some adults,” says Shannon Lea Watkins, a University of California, San Francisco researcher whose study was used in the larger report. “To me, that trade-off sounds quite clear.”

“E-cigarettes themselves, and their components, are significantly less toxic than combustible cigarettes,” says David Eaton, the dean and vice provost of the graduate school at the University of Washington, Seattle, and head of the committee in charge of the report.

Keep in mind that we’re comparing e-cigarettes to actual cigarettes. Jumping off a 10-foot cliff may be significantly safer than jumping off a 50-foot cliff, but, like, why are you so interested in finding a safer cliff to jump off of?

For those trying to break their smoking habits, of course, the answer to that question is clear. If a life without cliff jumping seems like an unachievable goal, getting your fix with a fifth of the footage is obviously beneficial. Enter e-cigarettes. According to the new report, the products are likely to present a relatively minimal cancer risk (though again, this is only compared to actual, extremely carcinogenic cigarettes, and the absolute safety of e-cigs remains uncertain) and probably pose less of a risk to the people sharing air with you while you smoke.

However, there is no available evidence on whether e-cigarette use might cause heart problems, and exactly how carcinogenic they may or may not be is up for debate. They’re generally less toxic than combustible cigarettes, but what you’re inhaling (and how much of it) varies widely based on the brand of liquid nicotine and vape you buy. You may occasionally get higher heavy metal exposure with e-cigs, and they’re still addictive. Also, the flavorings in e-liquids are designated as generally-recognized-as-safe by the FDA, but those designations are actually only for oral consumption. Most of those flavorings have never been studied as inhalants, so it’s totally possible that spunky little jolt of raspberry you get with your nicotine is harming your lungs.

“We have some short-term data, but of course the long-term data on those potential health effects is really lacking,” Eaton says.

Should we help smokers quit, or prevent teens from turning into smokers?

According to the Family Smoking Prevention and Tobacco Control Act of 2009, any tobacco product introduced on the market after February 15, 2007 has to show a net population health benefit to users and non-users. So asking whether e-cigarettes do more harm than good is more than just a hypothetical; it could keep new products off shelves.

The new report concludes that there is some evidence, albeit limited, that e-cigarettes may effectively help people quit, especially if they contain nicotine. But we can’t really say that they’re better than other existing options, or going cold turkey. And according to Watkins, some studies show that for most of the population, e-cigarettes actually suppress cessation efforts. Eaton says the report didn’t delve into that question in detail, but agrees it’s an important area for future research.

Meanwhile, there’s substantial evidence that e-cig use increases the risk of ever using combustible tobacco cigarettes among youth and young adults.

There’s still more research to be done on why, exactly, less harmful forms of tobacco lead kids to smoke, but Watkins says there are likely several factors at play. Nicotine addiction is an obvious one—once addicted, kids might start to care less about the health risks associated with smoking—and that’s especially troubling given that some e-liquids advertised as nicotine-free have been found to contain the addictive substance. Other studies suggest it can change risk perception. Once a teen uses one kind of nicotine or tobacco, it makes cigarettes seen like less of a scary, unknown entity. But whatever the reason, the relationship between using e-cigarettes (or other non-cigarette products like hookah and chewing tobacco) and eventually smoking is strong.

“In order for a big committee like this to say it’s substantial evidence—you know there’s something there,” Watkins says.

“The question of whether vaping introduces young adults to tobacco products has been looked at in about 10 studies so far,” Eaton says. “None are large and great, but none are bad. And collectively, they find an association between vaping and the probability of ever having a cigarette.”

“What it doesn’t tell us is whether those teens are now hooked, or if they’re going to continue smoking,” he adds, “And it doesn’t tell us the actual probability of that happening. The relationship is quite clear, but the magnitude of that effect is not—and that’s a big data gap.”

There’s also some data to suggest that those who start smoking after vaping will smoke more intensely, and for longer periods, but the magnitude of that problem isn’t clear yet either.

This leads us to an uncomfortable public health quagmire. Will the kids who pick up smoking because of vapes outweigh the quitters who could only get off combustible cigarettes thanks to vaping?

The committee created population models to try to figure this out, and the results are a mixed bag.

“Under the assumption that the use of e-cigarettes increases the net cessation rate of combustible tobacco cigarettes among adults (i.e., the increase in permanent quitting offsets the potential relapse of former smokers because of e-cigarettes), the modeling projects that use of these products will generate a net public health benefit, at least in the short run. The harms from increased initiation by youth will take time to manifest, occurring decades after the benefits of increased cessation are seen. However, for long-range projections (e.g., 50 years out), the net public health benefit is substantially less and is negative under some scenarios.“

Only the most extreme models—one where researchers assumed e-cigarettes were as much as half as toxic as cigarettes, or that kids were more than twice as likely to smoke rather than vaping—showed dramatic impacts on public health. But long-term projections still showed young people bearing the cost of our immediate benefits.

“The biggest public health benefit is seen over the next 20 or 30 years,” Eaton explains. “As you go out longer, of course those users introduced via e-cigarettes, their health effects don’t arise until they’re 50, 60, 70 years old. So that’s when you start to see that overall benefit become less. Even in our models that don’t necessarily go to zero or negative health benefits, they’re certainly less over time.”

And remember, this is assuming that e-cigarettes are actually getting more people to quit smoking, which researchers say hasn’t been studied closely enough.

“If we think that in some conditions e-cigarettes help with smoking cessation, but in other conditions they make it worse, identifying which is which seems important,” Watkins says. “Patches and gum don’t pose this risk to kids, so maybe we should be focusing on improving those cessation aids.”

TL;DR—It’s possible that more adults will quit smoking thanks to e-cigarettes, but there’s even more evidence showing they’ll get more young people to smoke, too. Models suggest this could cause public health problems in the long run, and we have no way of knowing just how bad the impact could be.

If you’re hoping to rely on e-cigarettes to help you quit smoking and have failed using other available aids, go ahead and use them as a cessation tool. The evidence suggests you’ll improve your own health and that of those around you (though it’s important to note that e-cigs can sometimes explode, and that liquid nicotine can be fatal if swallowed, which is a risk if you have small children).

But if the choice is between vaping and not using nicotine at all—maybe you quit smoking and switched to vaping ages ago and have no plans to stop completely, or perhaps you picked up vaping of your own volition—you should absolutely try to quit. Vaping is not good for you, and it’s still highly addictive. You did a great thing when you stopped smoking and started vaping. Now it’s time to follow through on step two of that process and kick nicotine to the curb for good.

From a public health standpoint, the issue is a lot more complicated. Should e-cigarettes even exist, or does the offering of a lesser evil only serve to tempt more people into a dangerous habit?

Even if e-cigarettes can help some smokers, Watkins argues, they should be made less appealing to teens. Research suggest that the flavors of many e-liquids are cited as reasons to smoke by young users, she points out, so simply banning flavored options could solve a lot of problems. Policies could also come down harder on advertising for e-cigarettes, making it more difficult for products to target a young audience.

One thing is for certain: more research is desperately needed. For now, experts are left balancing potential health benefits with dangerous downsides. If not, our 2050 reports on e-cigarettes may be full of evidence that we damned a new generation of smokers while making it slightly easier for their elders to quit.

“If it was my child, I’d rather they not start smoking at all, and I hope we see educational messages supporting that,” Eaton says. “Likewise, I hope they get a fair chance in terms of being available to smokers who could benefit from using them. It’s kind of a double-edged sword in terms of figuring out what kind of public health benefit we can get from this.”