In one instance, Juul representatives told students in school that its products were less harmful than cigarettes. 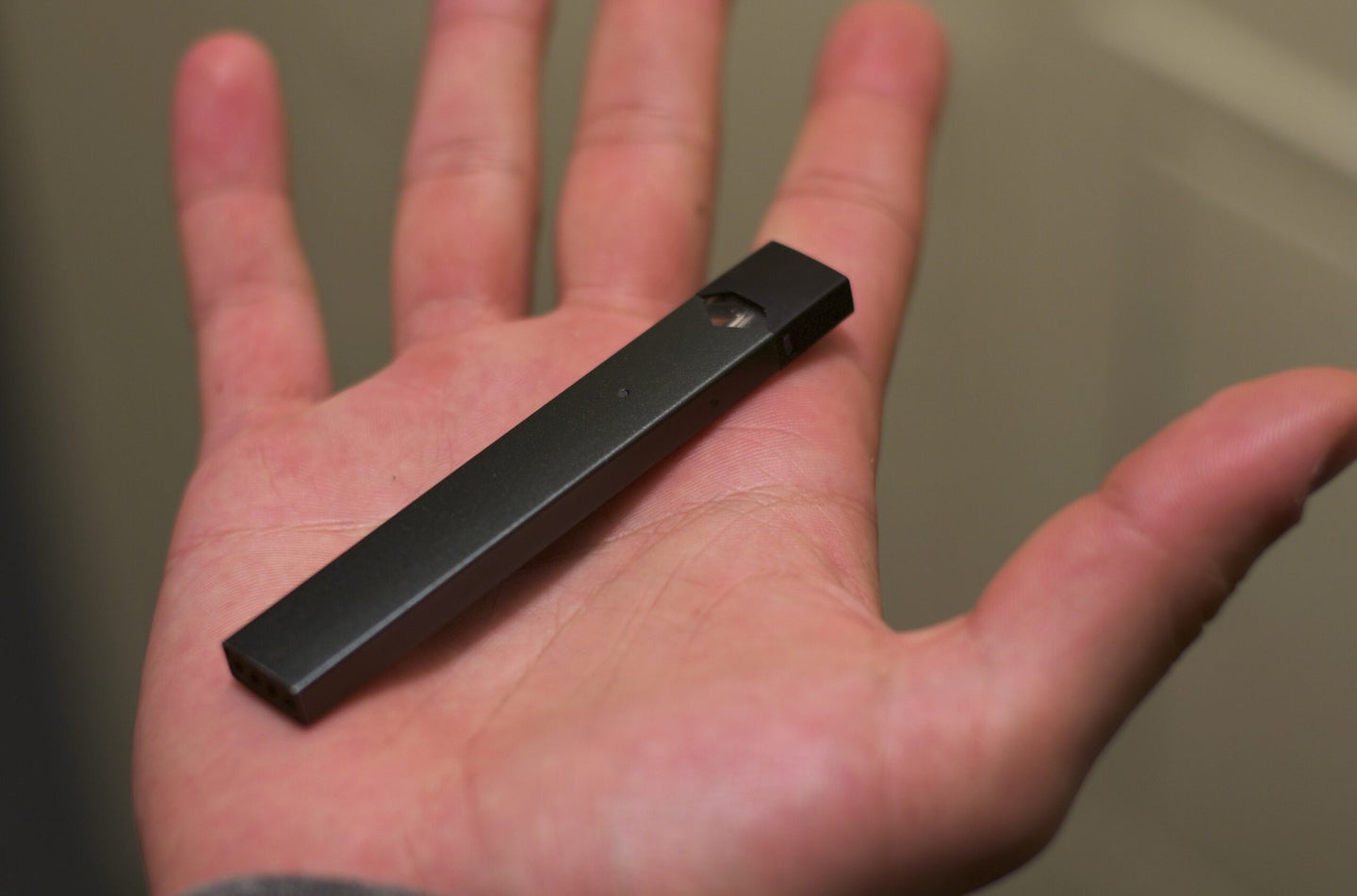 At a July House of Representatives subcommittee meeting on the youth nicotine epidemic in the United States, members of Congress heard testimony about vaporizer company Juul’s health claims and marketing practices. The evidence presented, along with documentation collected directly from the company, was enough for the Food and Drug Administration to conclude that Juul issued misleading statements about and illegally marketed their electronic cigarettes, according to a warning letter sent to the company this week.

“Juul has ignored the law, and very concerningly, has made some of these statements in school to our nation’s youth,” said acting FDA commissioner Ned Sharpless in a press release.

Companies can petition the FDA to be able to label their tobacco products as ‘modified risk,’ meaning they pose less of a health risk than traditional cigarettes. However, the agency has never approved an application for that status. In its warning letter to Juul, the FDA says the company marketed its tobacco products as modified risk without agency approval. They cited testimony from the congressional hearing in July: including that Juul representatives said during presentations that Juul was “much safer than cigarettes,” “totally safe,” and “a safer alternative than smoking cigarettes.”

“Regardless of where products like e-cigarettes fall on the continuum of tobacco product risk, the law is clear that, before marketing tobacco products for reduced risk, companies must demonstrate with scientific evidence that their specific product does in fact pose less risk or is less harmful,” Sharpless said.

It’s unusual for the FDA to send a warning letter to a company based on evidence presented at congressional hearings, says Marc Scheineson, a food and drug expert at the law firm Alston and Bird and former associate commissioner for legislative affairs of the FDA. “The FDA has its own sort of inspections and monitors,” he says. It’s surprising that they might learn anything new from other sources, and it’s surprising that they would lean on the recall of verbal statements made during presentations as the basis for such a strong statement. It’s also unusual that they would send a warning letter based on verbal marketing claims, he says, rather than on written materials.

Juul has already voluntarily removed flavored products from retail stores and changed its marketing, after the FDA started scrutinizing widespread use of its products by young people. Most enforcement action around youth sales had previously focused on retail stores selling to minors, says Joshua Kipnees, a partner in the law firm Patterson Belknap focused on false advertising. “The warning letter to Juul likely signals that the Agency is ready to pivot to the manufacturers and address head-on what it perceives is the source of e-cigarettes’ kid-focused positioning,” he says.

The warning comes along with increased scrutiny of all vaporizers and e-cigarettes, not just those sold by Juul: The FDA and the Centers for Disease Control are investigating five reported deaths linked with vaping, and 450 possible cases of illness related to e-cigarettes have been reported. The cause is currently unknown, but the majority of illnesses appear to be related to unregulated vaping liquids containing THC, a psychoactive component of marijuana.

Along with its warning letter, the FDA requested documents and data about the company’s “Make the Switch” and “Switching Program” campaigns, which encourage smokers to move from cigarettes to Juul. “The FDA is requesting documents and information about these practices, including any and all scientific evidence or data, such as consumer perception studies, related to whether these statements and representations explicitly or implicitly convey that JUUL products pose less risk, are less harmful, present reduced exposure, are safer than other tobacco products, or that the products are smoking cessation products,” the press release said.

Cracking down on the grounds that Juul violates laws around modified risk tobacco products sets a high bar for both Juul and other e-cigarette companies to clear in order to make any type of statements comparing their products to traditional cigarettes, Scheineson says. “To get a modified risk claim, the FDA has created hurdles that would require adequate and well-controlled clinical evidence, which would mean having a control group of smokers to compare to [a similar group of] vape users. You’d have to evaluate them over the period of time it takes to get lung cancer, which could be a lifetime,” he says. “That kind of research could take 20 years and cost tens of millions of dollars.”

Baring that evidence and that designation—which the FDA has never granted—the warning letter opens a chasm between what they’re able to say and what they aren’t, Scheineson says. It might bring up issues with the “switching” campaign, which Juul heavily promotes. “If you’re saying I switched from cigarettes, you’re not saying it’s better, but the implication is clearly there,” he says. The FDA may not want to leave open the avenue for kids to get the idea that e-cigarettes are safe or harmless, even if they’re not as harmful as cigarettes,” he says.

Part of the motivation for this warning letter under unusual circumstances might have been political, Scheineson says, as the acting FDA commissioner seeks permanent confirmation and may want to follow former commissioner Scott Gottlieb in his strong focus on youth vaping. Senate Minority Whip Dick Durbin has publicly pressured acting commissioner Sharpless to take stronger action to prevent e-cigarette and vape use by minors.

Juul has 15 days to respond to the FDA with a description of how the company plans to correct what the FDA says are illegal activities. The company’s response—and whether the FDA accepts it as sufficient—will signal how the agency intends to move forward. “Will they accept a plan? Or go for the goal line and eliminate even the switching campaign,” Scheineson says. “I think Juul would go to court to defend it’s switching campaign.”