Animals are finding surprising ways to adapt to rising temperatures

This is how animals will keep their cool (or not) on a hotter planet. 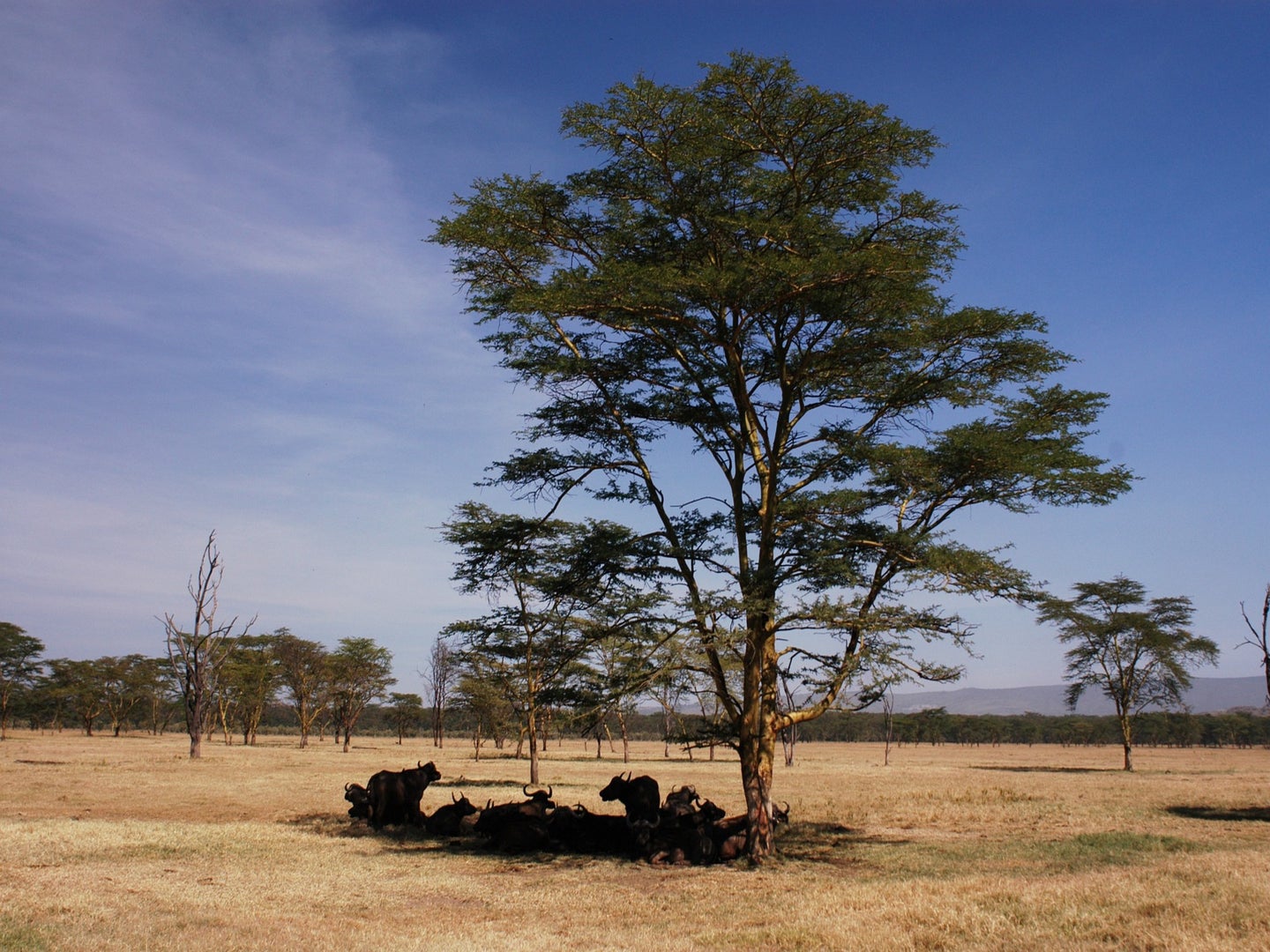 A third of the world's species could go extinct in 50 years due to climate change's increased temperatures, researchers from the University of Arizona have found. Alex Strachan from Pixabay
SHARE

At this point, the science is clear that sooner than later, we’ll have to say goodbye to a lot of animals and plant species around the world. According to a 2019 report by the United Nations, one million species are now at risk of extinction. This year, in a study published in Nature, researchers found that ecosystems in tropical oceans might start collapsing by 2030 and those in forests and mountains by 2050. Other reports have found that, if we keep heating the planet at the current rates, up to half of all animals will lose more than 50 percent of their habitat by 2100. We are, as IPBES Chair Sir Robert Watson said in 2019, in front of an “ominous picture.”

And yet, some species will endure. From birds migrating early, sea turtles adjusting their routes, and Caribous having babies earlier in the spring, animals are already changing their behavior to adapt. But how will they survive the ever-increasing global temperatures that, if we don’t do anything, will keep breaking records each passing year?

The answer is an evolutionary puzzle that is still being completed, says Marta Muñoz, an evolutionary geneticist at Yale University. Our understanding of how animals use different strategies to maintain their body at a specific temperature—called ‘thermoregulation’—is surprisingly recent. “You would think that this idea goes back to the 1700s, right? but no, not at all,” Muñoz says. “It was formalized in 1944. So to put that into context, we discovered the structure of DNA less than a decade after we figured out that thermal regulation was a thing.”

There are two ways in which animals have evolved to thermoregulate. They either spend energy to maintain a stable temperature, which is the path that warm-blooded animals have chosen, or they can strategically slow down or speed up their metabolism to match the outside temperature, the tactic that amphibians, reptiles, insects, and most underwater creatures employ. (That’s why, when conditions get abnormally cold in Miami, you see iguanas falling from trees—their metabolism slows down to the point that their muscles stop functioning).

But no matter what path an animal chooses, heat will always bear a bigger burden, says Muñoz. In her research, she has shown that lizards’ ability to resist colder temperatures has evolved ten times faster than their ability to tolerate hot conditions. This could be explained by the fact that, when temperatures are too cold, animals either adapt to certain conditions or they die trying. “There’s no escape from the cold. You can’t hide or run away from it,” she says. In contrast, a lizard can always find a patch of shaded forest where the temperature is significantly lower than one where direct sunlight hits. Over millennia, the fact that animals can adapt to hotter temperatures by moving around has slowed down the evolution of physical traits to cope with extreme heat.

Similar behaviors have been found in butterflies. These insects can adapt to heat either by finding patches of colder areas in a forest or by using tricks like moving their wings at a certain angle to make the sun rays bounce, says Andrew Bladen, a researcher at the University of Cambridge who studies how rising temperatures are affecting butterfly populations in the U.K. Recently, his team caught and measured the body temperatures of over 4,000 butterflies from 16 species. They carefully registered if they seemed to be regulating their temperature either by occupying a cooler microclimate or by moving their wings in different directions. They published their findings in September of this year in the Journal of Animal Ecology.

“What we found was that the species which were more reliant on using microclimate tended to be the species that have declined the most over the last 40 years,” he says. The species whose populations have been increasing in the same period are the ones that behave in specific ways to adapt to higher temperatures. This means that in the long run, a simple tweak in the behavior of some of their individuals can alter the destiny of a species.

But climate change is not only about a steady increase in temperature. It also promises sudden extreme temperature changes that will put organisms in a shock. Surviving these outlier events that might become frequent as climate change intensifies will ultimately reshape ecosystems, says marine biologist Diana Madeira. In her lab at Universidade de Aveiro, in Portugal, she’s been trying to understand how well-equipped different fish species are at surviving these shocking conditions.

She’s found that one of the most important species for European fisheries, the gilt-head bream, can survive up to 28 days in waters as warm as 86 degrees Fahrenheit (30 Celsius), which is the projected temperature that European seas will have during a heatwave in 2100 if the climate crisis isn’t stopped or stalled. After that point, their tissues would start to damage in ways that can’t be fixed, leading to death.

And what if the heatwave hit while the breams are still little larvae or young, inexperienced fish? Recently she found that sea bream larvae are extremely vulnerable to extreme heat—they can’t move much to escape warm waters, but young fish are very good at surviving them. Mature fish probably don’t do well because they spend a lot of energy in reproduction, Madeira explains. These results will vary from species to species—others might choose to survive in the short-term, but suffer on a generational level. “They make a trade-off. Like, ‘okay, I can survive, but then I won’t reproduce as much, or I won’t grow as much’.”

For mammals and birds, keeping it cool is not about preventing their bodies from failing them, but rather spending energy regulating their internal temperature, explains Trevor Fristoe, a researcher at the University of Konstanz, in Germany. Unlike lizards or fish, warm-blooded animals don’t fall apart as quickly in extreme heat. To stay cool, they’ve developed different strategies like panting, pooping (yes, pooping), or even controlling the air around them with big ears. A few of us, primates and horses, evolved to evaporate water through the skin (sweating) to stay cool. To clear that moisture, our bodies spend energy which in turn, heats up our insides even more. It’s a cycle that, if sustained for too long, ends with heatstroke. Research has found the maximum body temperature that a warm-blooded animal can achieve and survive ranges between 105 and 118 degrees Fahrenheit.

To understand how animals have adapted to extreme heat, in 2015, Fristoe led a study that looked at how 211 bird and 178 mammal species had evolved. From an evolutionary perspective, Fristoe explains, surviving the heat as a warm-blooded animal is about achieving a delicate balance between body size, body shape (compact animals can survive extreme cold better), the pace at which the animal burns energy (metabolism), and how exposed is its body to the elements (feathers, fur, and similar isolating mechanisms protect animals to some degree from changes in weather). He found that size doesn’t play a particularly significant role in adapting to temperatures, since there are enormous and tiny animals everywhere in the world. In birds, metabolic rates played a massive role for birds, while isolating mechanisms like body hair or fat reserves had a prominent role for mammals.

But his model ignores what Marta Muñoz’s lizard studies have been trying to address: behavior. Recently, researchers have found that while taking care of their eggs, Zebra finches do fast-paced, high-pitched “heat-calls” when exposed to around 111 degrees Fahrenheit (44 Celsius) which seem to be more effective than the silent, short breaths they take in when they’re hot (you might have seen dogs doing this too). These heat-calls slow down the growth of the unhatched new generation, who also becomes more tolerant to high temperatures in comparison to their parents. More comprehensible research has shown that behavior seems to be the most important tool to cope with extreme heat in warm-blooded creatures.

Temperature is only one of the many things that will change for animals due to human actions. Acidification of the oceans, increasing deforestation and urbanization, pollution, and altered weather patterns will create additional challenges for species. Researchers believe animals will also use behavioral tricks to adapt to those additional challenges. But, as Madeira points out, “sometimes our conclusions for one factor do not apply when you have two, three, four, ten things happening at the same time”.