Baby sharks are eating the birds that live in your backyard

Tiger shark barf reveals sparrows and woodpeckers are on the menu. 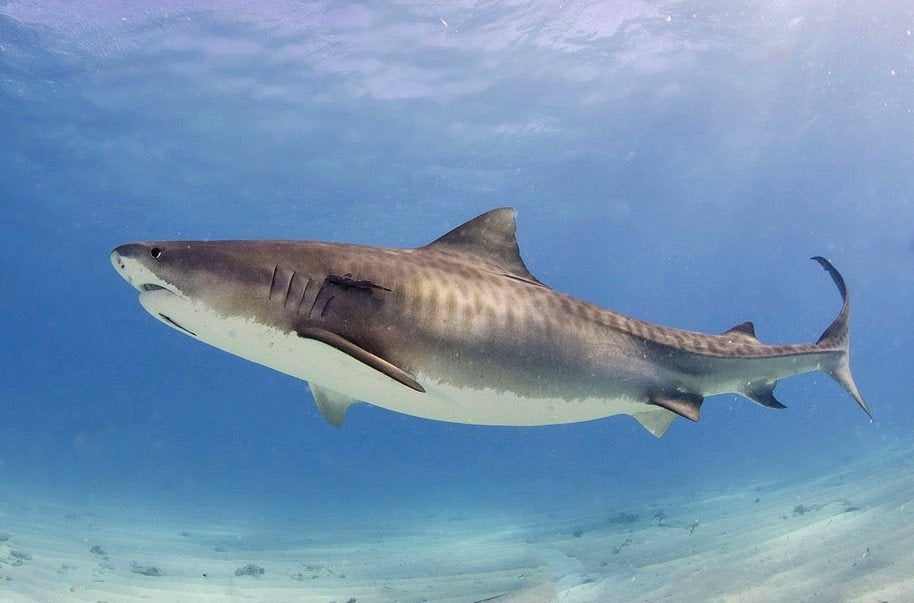 If you’re even a little bit on the internet—or have a child who is—you’re bound to have heard the song. Baby shark, do-do-do-do-do-do-… And now it’s stuck in your head again. You’re welcome.

But Marcus Drymon doesn’t know it, because he’s too busy studying the real thing as a fisheries ecologist at Mississippi State University. He’s always going out on the Gulf, surveying the waters, pulling up baby sharks, taking a gander at their emptied stomach contents, sending that barf up to Chicago for DNA sequencing… you know, the usual.

At least, that’s what he did for his most recently published study, which appeared Tuesday in the journal Ecology. By analyzing baby tiger shark barf with the help of a bird ecologist at the Illinois Natural History Survey and a molecular ecologist at the Field Museum, Drymon found the little guys weren’t just dining on fish and crustaceans. They also eat birds. And not just gulls and other seafaring avians, either. They consistently ate common backyard birds like sparrows, doves, and woodpeckers.

Drymon fist had an inkling this might be going on while conducting a routine survey. He and his colleagues frequently use a mile-long, heavy-duty fishing line to sample the Gulf of Mexico and get an idea of what’s living in it, around 100 times a year. One day back in 2010, Drymon wrestled a baby tiger shark on board, which isn’t a terribly uncommon occurrence. But he was flabbergasted when it barfed up a few feathers onto the deck. “It was so wild, very unexpected,” he says.

Eager to learn more, Drymon brought the feathers back to his lab. He patted them dry and paraded them around to some colleagues in ornithology, but no one could identify them with certainty (understandable, given that they were partially digested). “Ultimately, I turned to a good friend of mine, a molecular ecologist at the Field,” says Drymon, speaking of his co-author Kevin Feldheim. “I called him up and said ‘Hey Kevin, man, this is the wildest thing! Could you use your molecular techniques to figure out what kind of bird this is?’ And of course he did.”

Feldheim used a technique called DNA barcoding to figure out what kind of bird the shark had eaten. After isolating genetic material from the sample Drymon sent him, Feldheim could then look for well-known sequences in the DNA that were unique to a certain species. It’s important to note the technique isn’t perfect. Since it requires quite a bit of precision, either a processing mistake on the scientist’s side or slight variation in a single organism’s DNA could cause an incorrect reading. Broadly, it’s kind of like when your cashier scans a cucumber at the grocery store, but a smudge on the label means it comes up on the register as a sweet potato.

In this case though, Paul Hebert, a molecular biologist at the University of Guelph who played a major role in developing DNA barcoding but wasn’t involved in this particular study, says he “sees no reason to question the conclusions.” North American bird genomes have been sequenced enough times that their presence in reference libraries for barcoding is very well outlined, making it easy to define species “in nearly all cases, including those species reported from tiger sharks.”

When it came to the barfed-up feathers, Feldheim’s work showed they belonged to a brown thrasher.Drymon was taken aback—he thought he was dealing with a gull or a pelican, not something found in backyards from New Jersey to Oklahoma. From then on, he added another task to his surveys: analyze the stomach contents of tiger sharks whenever possible.

For the next nine years, he and his colleagues did just that. Sometimes they could leaf through the contents of a dead shark’s stomach, and other times they sampled tummies of living ones using a tube-down-the-throat and upside-down-shark maneuver. (The authors assure that no sharks were harmed, and were all tagged and returned to the ocean.)

In total, they looked at over 100 tiger sharks, and a shocking 40 percent of those bellies contained some form of avian remains. “All of the sudden, it’s not just a gee-whiz observation,” Drymon says, “it’s something they do relatively frequently.”

Once again enlisting the help of Feldheim, the team found evidence of 11 different bird species in shark stomachs, including swamp sparrows, yellow-bellied sapsuckers, house wrens, and white-winged doves. Curiously, though, Feldheim wasn’t able to find any marine bird DNA. So Drymon turned to another colleague, bird ecologist Auriel Fournier who’s currently affiliated with the Illinois Natural History Survey, to figure out why tiger sharks were eating so many terrestrial birds.

Right off the bat, they realized the birds were all migratory species, which would put them in the airspace over the Gulf twice a year. In the spring, many birds fly north from the Carribean, Central America, and South America to spend warm summers nesting in North America. Come fall, they make the return trip, often with new offspring in tow. To cross-reference the timing of when birds should be flying over the Gulf with when bird remains ended up in shark stomachs, the team used the citizen science database eBird, where users log birds they encounter from day to day. Lo and behold, tiger sharks ate the most birds in early September, right at the start of the fall migratory period.

So how do migrating birds in the sky end up in shark’s mouths in the water? Previous studies may provide an answer. Research suggests that when errant weather systems like unexpected cold fronts move in, a solid number of songbirds die and fall into the coastal ocean. That makes them an easy snack.

The final piece of the puzzle: Half the bird-munching tiger sharks in Drymon’s surveys were extremely young, clocking in under a year old. Adults can live to be over 15 years old, weigh over 1,000 pounds, and stretch up to 14 feet long. But these sharks were essentially babies, only a couple feet long. This leads Drymon to believe that pregnant tiger sharks use these coastal areas as nurseries for their newborns. With plentiful dead birds for easy nibbling, they’d be practicing a crucial skill for adult life, as tiger sharks are notorious scavengers that’ll eat just about anything.

“It was really mind-blowing when we were able to put this together,” he says. Still, more research and data will be needed to fully confirm the tidy narrative.

Going forward, Drymon hopes to learn more about these nurseries and the sharks who frequent them. Plenty of shark populations are at risk from fishing pressure, but protecting certain swaths of water, especially those home to pregnant females and newborn babies, could change that.