Genetically modified algae could soon show up in food, fuel, and pharmaceuticals 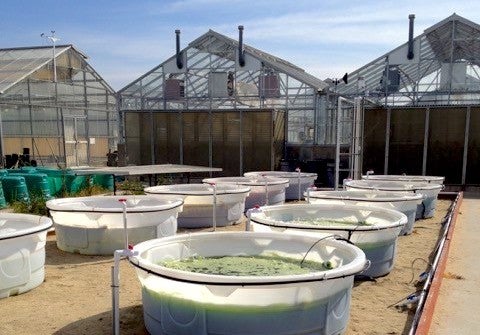 Algae can be used for anything. You can grind it into cattle feed or squeeze it into jet fuel. You can even make it into algae butter.

For now, algae-based products remain woefully expensive, but a group of California scientists is working on making them a whole lot cheaper.

Researchers at the University of California San Diego and Sapphire Energy have successfully grown a genetically engineered strain of algae outdoors for the first time. Importantly, the modified strain doesn’t hurt native algae populations. Their work appears in a new study in the journal Algal Research.

With genetic engineering, scientists can develop algae that grow faster and ward off deadly bacteria. They can create algae that produce more oil — which can then be turned into biofuels or biodegradable plastics. Or, they can engineer algae to be more nutritious, whether consumed by livestock or people.

“Every single organism that we use today to produce the food, feed and fiber that we use is genetically modified,” said Stephen Mayfield, a biologist at UC San Diego and co-author of the study. “This is true for both plants and animals. We did that through the process of domestication, in which we selected the mutations — genetic modifications — that produced the traits we wanted. That might have been larger ears of corns, or bigger soybean seeds, or even cows that produced milk longer.”

Each of those traits was the result of a modified gene, and “algae will be exactly the same,” he said. “In order to make this all happen, we need to domesticate algae, similar to what we did with our crop plants and farm animals. [But] this could take decades and we still might not get what we want.”

Genetic engineering would speed up the process, creating strains “required to produce the products we need so that we don’t have to cut down our last rain forests, or take every fish from the ocean,” Mayfield adds. “We can produce the fuel and food we need from a sustainable and renewable source.”

A cheaper, more productive algae could outcompete terrestrial crops on several fronts. It could be grown in tanks on land that is otherwise unsuitable for farming, in non-potable and even salt-water. Genetically engineered algae has the potential to feed millions as the climate warms placing additional stress on farms in the form of heat, drought and severe storms.

Algae can already grow fast, producing biofuels faster than even the most prolific crops. “Also, they take carbon out of the atmosphere, so they don’t release new carbon,” said Jonathan Shurin, an ecologist at UC San Diego and a study co-author. “They have a net-neutral effect.”

The series of experiments — funded by the Department of Energy and monitored by the Environmental Protection Agency — took place over 50 days in huge outdoor tubs with water samples taken from five regional lakes. The scientists cultured strains of Acutodesmus dimorphus and inserted two new genes. The first was a green florescent protein so the algae were visible, and the second caused the algae to increase production of a fatty acid.

The researchers wanted to know if their new strain would spread and harm naturally occurring algae. It did spread — presumably carried by the wind or by birds — to other tubs, but not very far, Shurin said. He added, “we wanted to see if adding the genetically modified strain posed some threat to the native ecosystem, but it did not change the ecology in any way.” The scientists plan to conduct additional experiments looking at the effects of weather, seasonal changes and other environmental factors.

“The first trial ran only 50 days, so there was little variation,” Mayfield said. “We also only checked two genes, as we wanted to be very cautious with what we put outside. We need to repeat this test for a longer period of time, and we need to add additional genes to see how they behave under outdoor growth. We simply need a lot more data before we are ready to say that genetically engineered algae are safe and effective. This is step one of that process.”

The researchers acknowledge it can be dangerous to tinker with nature, but they believe they are taking all appropriate precautions. “Life is risky, and algae are no different than other organisms,” Mayfield said. “But if we make the right changes, and then carefully measure their properties, we can easily manage the risk and develop the strain we need.”

Shurin agreed. “The concern is we’re going to create a monster,” he said. “[But] algae have been around for billions of years, and they’ve had long histories of evolution. If there was a super algae that could take over the world, it would have evolved by now.”