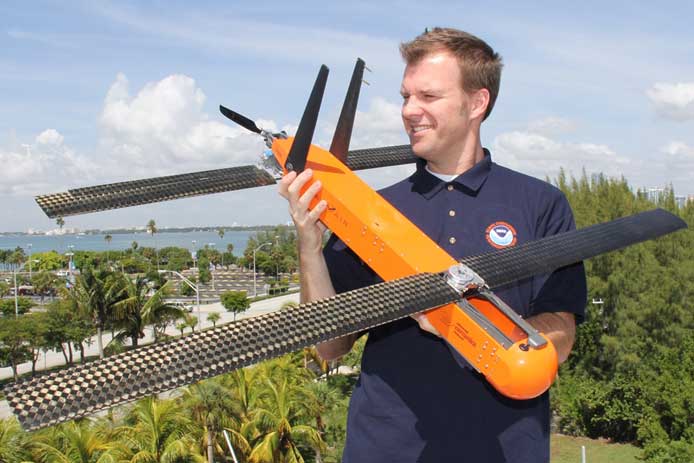 While scientists have gotten a lot better at estimating the strength of a hurricane before it hits land, they still don’t fully understand how hurricanes form. While satellite measurements can give meteorologists a pretty good picture of the atmospheric temperature and precipitation within a hurricane, sometimes the resolution is still “too coarse” to help researchers understand how storms form and mature, says Robbie Hood, the director of NOAA’s Unmanned Aircraft Systems Program.

This especially true in the vital area just above the water. Now the National Oceanic and Atmospheric Association (NOAA) plans to use inexpensive drones to fly into the most active part of the storm and let them be destroyed by it, in order to better predict how a hurricane will progress. Hood presented an overview of the program on Saturday at the annual AAAS conference in Washington, D.C.

In the past, researchers have used the dropwindsonde, a sensor attached to a parachute, to estimate wind speeds at the Tropical Cyclone Boundary Layer, right above the water. These fall quickly into the water, giving scientists a lot of information about the vertical conditions of the storm on the way down, but only a brief glimpse into the conditions at the surface — which are most essential to their predictions.

“The hope for the UAS drones flying at low altitudes is that they can provide more detailed information than a satellite of the lowest layer of the atmosphere above the ocean while covering a broader horizontal range than a dropsonde,” Hood says.

Now NOAA is starting to use two models of drones: The Raytheon Coyote and the Piasecki Whimbrel. Both can be launched from a manned aircraft. Once they’re released, the drones have wings that pop out that enable them to fly in the high-intensity winds.

The Coyote is designed to fly for up to an hour. Using radio communication, they transmit data from inside the hurricane to the aircraft that launched them.

These two drones join NOAA’s growing fleet for weather detection; over the past five years, NOAA has partnered with NASA to use the Global Hawk drone to detect storm-forming conditions all across the Atlantic.

There are a few others designed to observe storms for longer durations, but for the moment NOAA is putting more resources into this “expendable” drone design, Hood says.

The Coyote and Whimbrel are still under development (the Whimbrel hasn’t even had its first test flight yet), and NOAA hopes to assess whether the data they can provide is more valuable than that of other drones, especially when cost and feasibility are taken into account. If the drones’ development continues as expected, the final step will be for NOAA to conduct an environmental assessment to ensure that these handful of disposable hurricane drones don’t contribute significantly to ocean trash, once they’ve fulfilled their mission.