DroneBox Is A Nest For Drones 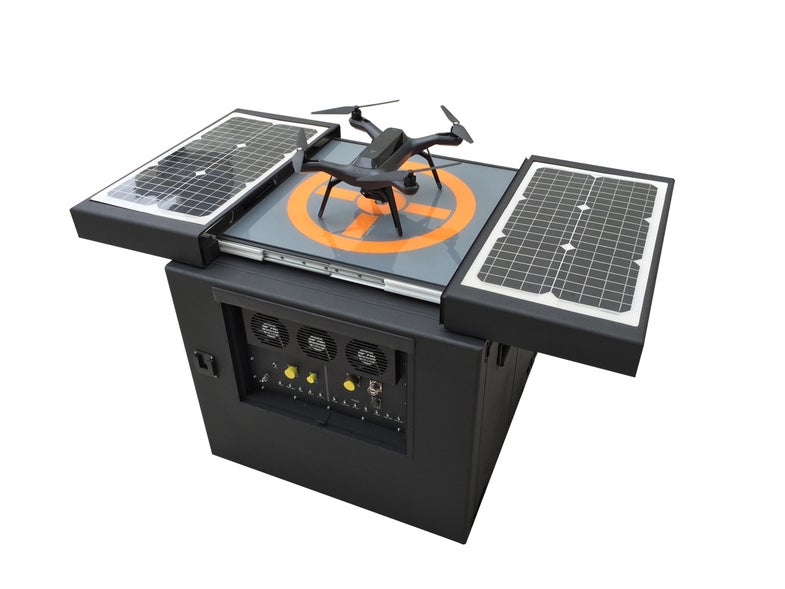 Drones are a set of limitations that fly. Batteries limit how far drones can go, memory limits how much a drone can record, signal strength (and the lack thereof) limits how far drones can fly. The DroneBox, presented by H3 Dynamics at last week’s Singapore Air Show, is a way around those limitations: a home for drones, connected to a network of drones, that are together an Internet of Drones.

With DroneBox, a quadcopter lives most of its life inside a landing pad. The top of the box has solar panels to charge the drone, and it can be connected to the grid too. When the drone wants to fly, the roof retracts and the platform elevates, letting the quadcopter fly free. Or not free, if instead the quadcopter is tethered to its home like a dog leashed in the hard, an alert sentry over a very small area. These Droneboxes will connect to other drone boxes, and eventually back to a central control system. This means they can be networked, short-flying drones communicating with other stations in an “internet of drones.”

To really work, though, a customer needs to buy a lot of DroneBoxes and set them up over an area. This could be a military that wants to place scouts along a front line, a conservation group that wants to monitor wildlife in remote areas, or an oil company trying to check on the far flung parts of a pipeline. With external power stations and weather monitoring units, as well as wireless data download and transfer to server, Droneboxes could be a surrogate network of watchers, watched by a relatively small staff of people.