Are The New Generation Of Streetcars A Solution Or Just A Novelty?

Seattle's latest streetcars are environmentally friendly, quiet, and charming. But can they handle the traffic load of a modern American city? 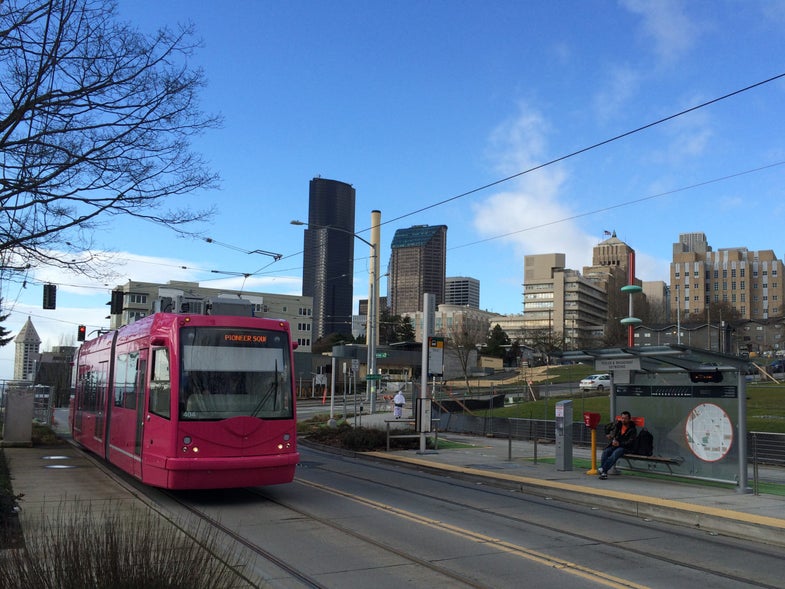 On January 23, Seattle’s new First Hill Streetcar made its initial descent down Broadway Avenue and into the heart of Capitol Hill while carrying a load of passengers. For public transportation enthusiasts and commuters alike, it’s been a long time coming.

Capitol Hill, First Hill, the Central District, and the International District – four of Seattle’s most thriving neighborhoods – haven’t enjoyed regular streetcar service since the early forties, when, at the behest of the American automotive industry, the city abandoned its electric lines in favor of buses. Since then, some streetcars have returned to Seattle, but not in these busy neighborhoods.

From 1982 until 2005, the Waterfront Streetcar serviced Seattle’s waterfront along Alaskan Way. Considered a “heritage streetcar,” the line employed trams built between 1925 and 1930. In 2007, Seattle’s first modern streetcar with newly built cars opened in South Lake Union (SLU). The SLU and First Hill lines are part of a citywide effort to modernize and improve public transportation over the course of the next decade.

In an effort to better understand the streetcar’s role within the existing transit regime, and because I had many errands to run, I rode it probably a dozen times during its free soft launch. Here’s what I observed.

When I took my first ride, I was immediately impressed by the car’s tranquil whirr, the way it glided toward the next station as if floating above the road. Those initial trips felt almost solemn to me—like we, the passengers, were participating in something monumental, though maybe I’m projecting. Nevertheless, I couldn’t help but notice that as service continued, the allure of the streetcars’ novelty quickly wore off: Riders loosened up and resumed their usual commuting habits of staring at their phones, talking with friends, and even taking naps.

Before we start taking the First Hill Streetcar for granted, though, let’s pause to remember how the city struggled to fund, build, and test it. In 2007, voters in Seattle and the surrounding counties rejected the Sound Transit 2 (ST2) ballot measure. If passed, it would’ve funded several ambitious mass transit projects in and around the city, including the First Hill street car line. A year later, voters approved a reduced version of it, allowing Sound Transit to move forward with its plan to build a streetcar on First Hill.

Following the passed measure, in 2011, the Czech-based company, Inekon, inked a deal with the city to design and manufacture a unique fleet of cars that would be used on the First Hill line. The cars feature rapidly evolving technology that uses energy produced by regenerative braking. Getting this technology to work caused major delays, and resulted in fines for Inekon upwards of $750,000. In the end, though, I must admit that the company delivered six beautiful Trio Type 121 trams.

As they navigate the cars through intersections, the conductors will often sound a bell. This detail, which evokes an old-fashioned trolley, belies the streetcar’s innovative, site-specific technology. When traveling northbound, uphill, an overhead wire provides electrical power to the tram. For the southbound, downhill leg of the route, cars can detach from their overhead wires and run on energy produced by regenerative braking and stored in hybrid batteries. Though trains have used forms of regenerative braking since the early twentieth century, the technology is rapidly evolving, and is new to modern streetcars.

While riding, I often admired the layout, and in particular, the attention paid to accessibility. The car’s low-floor center section allows passengers requiring wheelchairs to board without additional accommodation. Riders who can stand are encouraged to do so, as there are few seats. A prominent stainless steel bike rack is a reminder that the streetcar is part of a larger transit network that includes bike lanes.

Unfortunately, during periods of heavy traffic, bicycling will probably be faster and less headache inducing than riding the streetcar. Because the streetcar shares a lane with cars and buses, the speed of service will suffer during rush hour, and when an accident occurs, it’ll grind to a halt. I once made the mistake of riding at 5 p.m. It was maddening to watch pedestrians outpace the streetcar, and it reminded me of what I really want for Seattle (which is currently in development): a broad light rail system with exclusive right-of-way. That system which will have two stations – one in Capitol Hill and one in the University District – is set to open in 2016. Two more streetcar lines – the Broadway Streetcar and Center City Connector – are scheduled to enter service by 2019.

Seattle’s not alone in its quest to launch new streetcars. In fact, it’s not even the first American city to boast a modern streetcar. That honor belongs to Portland. Salt Lake City, Tucson, and Atlanta have all followed suit, and modern lines are currently in development in Washington, DC, Cincinnati, Detroit, and Kansas City. This month, New York City’s Mayor Bill de Blasio announced a plan to connect Brooklyn and Queens by streetcar. Proponents of his plan will be quick to point out that streetcars encourage economic development and drive up property values. They may even invoke the concept of “rail bias” – “the demonstrated willingness of people to make urban transit trips on trains that they would not take on equally fast buses.”

If streetcars are proven to attract more riders than buses, then why doesn’t every American city make like Portland and start laying track? For one, streetcars are expensive. Seattle hiked its regional sales tax by 5 to 10 percent in order to pay for its transit projects. Second and perhaps most importantly, streetcars can only absorb a small fraction of any city’s daily transit load. King County Metro, the county’s transit authority, continues to operate 1,835 buses on 215 routes. So while streetcars are environmentally friendlier, quieter, and some say more aesthetically pleasing than buses, they remain something of an outlier, an experiment. And for every passionate defender of rail travel, an equally fervent – and probably more practical – advocate of improving existing buses waits in the wings.

In other words, don’t expect any American city to embrace modern streetcars like cities embraced trolleys in the early twentieth century. Do expect to start seeing them in affluent or rapidly gentrifying areas, along retail corridors, and near tourist destinations. Ridership on the SLU line didn’t take off until Amazon moved its headquarters into the neighborhood. The implications of this could be disturbing. If lower-income residents continue to be priced out of Seattle’s neighborhoods, the city’s streetcars will serve an increasingly homogeneous population. But those effects remain to be seen. In the meantime, adult riders with incomes at or below 200% of the federal poverty level qualify for a $1.50 low-income fare. Standard adult fare costs $2.25, and seniors ride for a buck.