HTC’s Vive Pre Is Still The Most Futuristic VR Headset 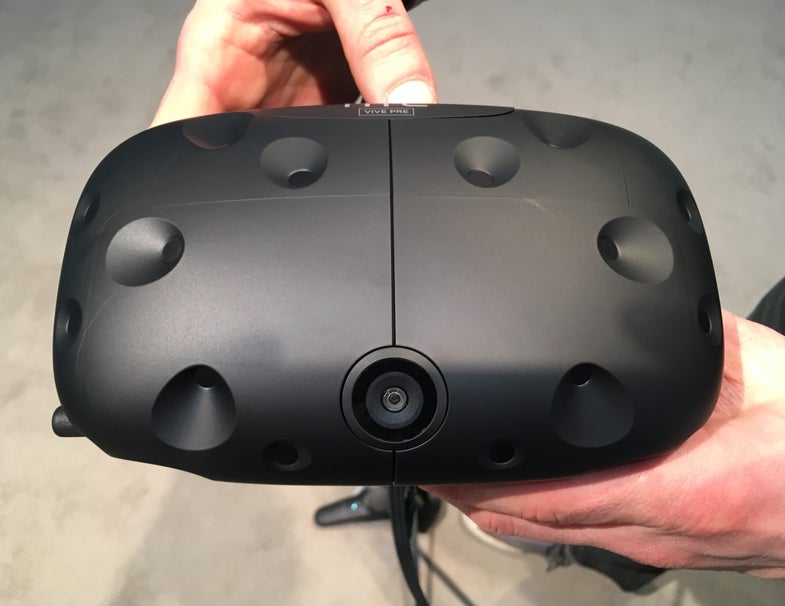 The HTC Vive release date and price have been confirmed today at the Mobile World Congress tech show in Barcelona, Spain: the virtual reality headset will be available to pre-order on February 29 for $799.

But there are more pieces to the virtual reality puzzle than just the Vive, which is HTC and Steam’s joint offering. Oculus Rift kicked off the modern VR race, and the Facebook-owned headset is coming very soon — it became available for online pre-order in January for the lower price of $599. Playstation VR will be the first and only virtual reality headset from a first-party, dedicated-console maker. But the HTC continues to keep the Vive’s (now Vive Pre) feature list ahead of the pack. And they’re not stopping.

Seeing Your Friends In VR

We went hands-on again with the HTC Vive Pre at MWC 2016 in Barcelona. Not much has changed since the version that debuted at CES back in January. The addition of a camera lens on the device’s face allow for wearers to see what’s going on in the real world behind the virtual aliens you’re shooting or cockpit you’re flying in.

Real people appear in the virtual world as a blue silhouette. Facial features and other signifiers become slightly clearer as they get closer, but still appear ghost-like. In a good way, or at least useful way. Double tapping the button underneath the trackpad gives you a visual of the entire room. Now the Vive’s chaperone abilities warn you of walls and people you could potentially bump into.

The feature of the Vive Pre isn’t new, but it’s also something competitors will be shipping without. Most VR solutions don’t offer the Room-Scale—the movement tracking that lets you walk around your room and have it translate to walking in the game—so the camera is less necessary. But we’d still appreciate a way to view where we set down our drink with our butts plumped down on the couch as well. And seeing people we know and other real world elements blended into the game feels nothing short of futuristic.

The newest bullet point added to the back of the Vive Pre’s box are incoming call notifications from your smartphone .

“We want people to know this was well thought out,” says Shen Ye, product specialist for HTC. Ye showcased how the Vive Pre behaves when your phone receives a call. A notification in the center shows which number is ringing your phone. Upon the call’s arrival, users can decline, reply with a canned message or answer the call and carry out the conversation from within Vive. Call clarity sounds exactly the same as putting the phone next to your ear or using earbuds.

“The system also supports calendar notifications and canned responses can be changed,” Ye tells us. “It will support iOS and Android.”

The inclusion of call notifications is a simple one—nothing we haven’t seen the Apple Watch or even most Fitbits do. But by the end we couldn’t help but wonder why consoles haven’t included this simple feature?

Even if you’ve used the Vive before, putting on the helmet and walking around the digital world still gives you a slight chill. Playing familiar games offer immersive experiences like the sunken ship demo HTC continues to showcase or Tiltbrush, which allows you to paint in mid-air and then walk around your creation. Playing new ones like the space shooter at MWC 2016 this year offers creative uses for the Vive’s feature set: dodging oncoming bullets or reaching behind you to switch between dual-wielding or grabbing your shield with one hand.

The ability to walk around in a game alone sets the Vive Pre apart. The ability to see the real world through the headset or be warned of oncoming walls or people show the makers have done their homework—call and text notifications are icing on the cake.

HTC’s $800 price tag is higher than Oculus’s $600, and will likely be pricier than what Playstation’s offering. But for a device that provides wearers a window into the virtual world, it offers a great glimpse at what VR enthusiasts can expect in the real one.