This Ship Is A Hovercraft Until It’s An Airplane

How low can you soar? 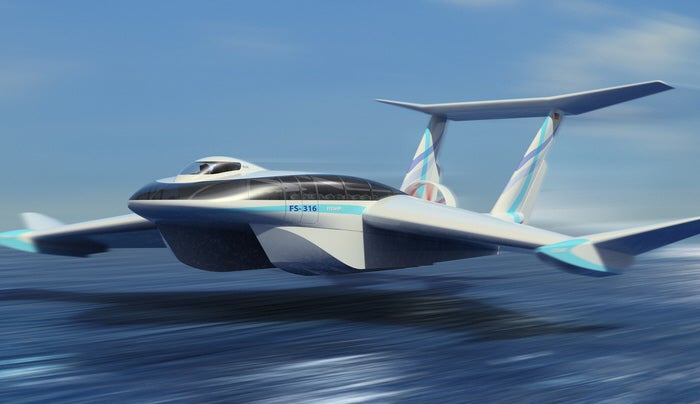 When is an airplane actually a boat? That’s as much a legal question as it is a philosophical one for FlyShip, a German purveyor of low-flying boat-like seaplanes. FlyShip’s decades-old AirFish series of vehicles are legally boats, but they fly like very, very low-skimming planes. And they’re working on a new version.

Taking advantage of the ground effect in aerodynamics, by which a vehicle flying fast and low generates lift under the wings and reduces drag, making the plane almost float above the surface of the sea. For decades Soviet engineers built special vehicles called Ekranoplans to take advantage of this ability over shallow water, lakes, and rivers. Boeing even looked into the design for a cargo vehicle.

In 1992, Popular Science covered a much earlier version of the Airfish, noting that the low-flying planes could literally fly under the radar. Plus, “the potential efficiency of ground-effect flight might give such craft enormous range as compared with aircraft” is seen as useful as an anti-submarine weapon. Twenty-four years later, there are very few ground effect vehicles in the world, though the promise remains.

The proposed next-generation flying ship would operate like a shallow boat in harbors, a hovercraft while building speed, and then a low-flying plane on the open water. It could even hop small islands or modest obstacles in its way.

A video about the hoverwing was uploaded earlier this month. Watch it below, for both its future promises and fascinating PowerPoint-style musing on Baltic trade.