Arctic Report: Inside An Icebreaker Ship

In today's Arctic, there isn't as much ice to break 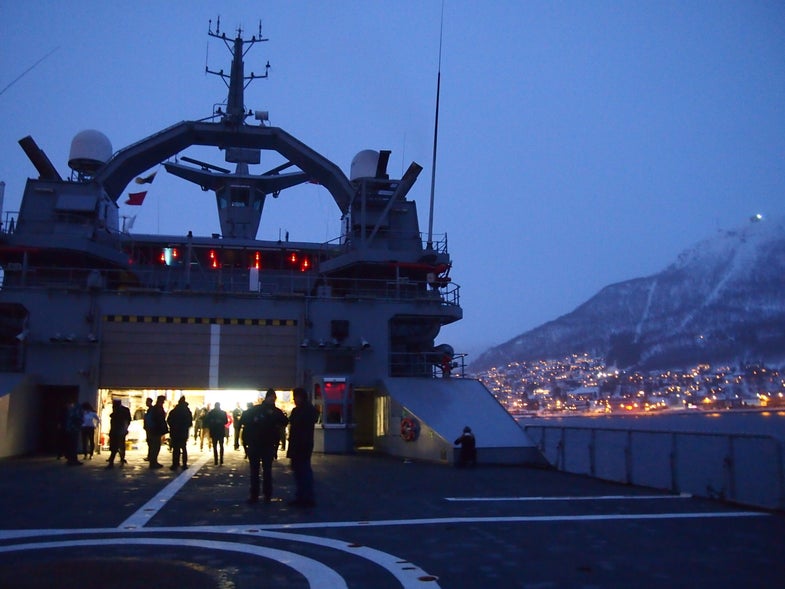 As I board the Norwegian Coast Guard’s icebreaking ship the KV Svalbard, officers greet me with salutes. I’m not sure if I’m supposed to salute back, or if that would be impolite, so I just say hello (or the Norwegian “hei hei,” to be more specific). The officers crack a smile in reply.

Our group of international journalists gathers in the hangar to kick off the Arctic Frontiers conference—a meeting on industry and the environment in the Arctic. Tonight we’re taking a tour of the island of Tromsøya, on which much of the municipality of Tromsø sits. As a gentle snow starts falling, the boat pulls out, glides below a bridge, and passes by the glow of an Arctic cathedral.

How These Ships Work

These ships have long served to keep shipping transport routes open in the Arctic. In the mid 1800s, they were powered by steam. In the 1930s, they transitioned to diesel, and in the 1950s, diesel-electric. Today, Russia even has a few nuclear-powered icebreakers. This is what it does:

Tonight, we’re not busting through any ice. In fact, the boats have far less sea ice to break through at all these days.

An Icebreaker with No Ice

As we motor around the city, Commodore Sverre Nordahl Engeness, the commander of the Norwegian Coast Guard, brings us up to speed on his mission and how it’s changing along with he climate. He starts off by showing a map of the Norwegian Arctic with a shadow over much of it. The Coast Guard’s work is already difficult and risky, he says, but the fact that it has to be done in the dark for much of the year makes it an even greater challenge. 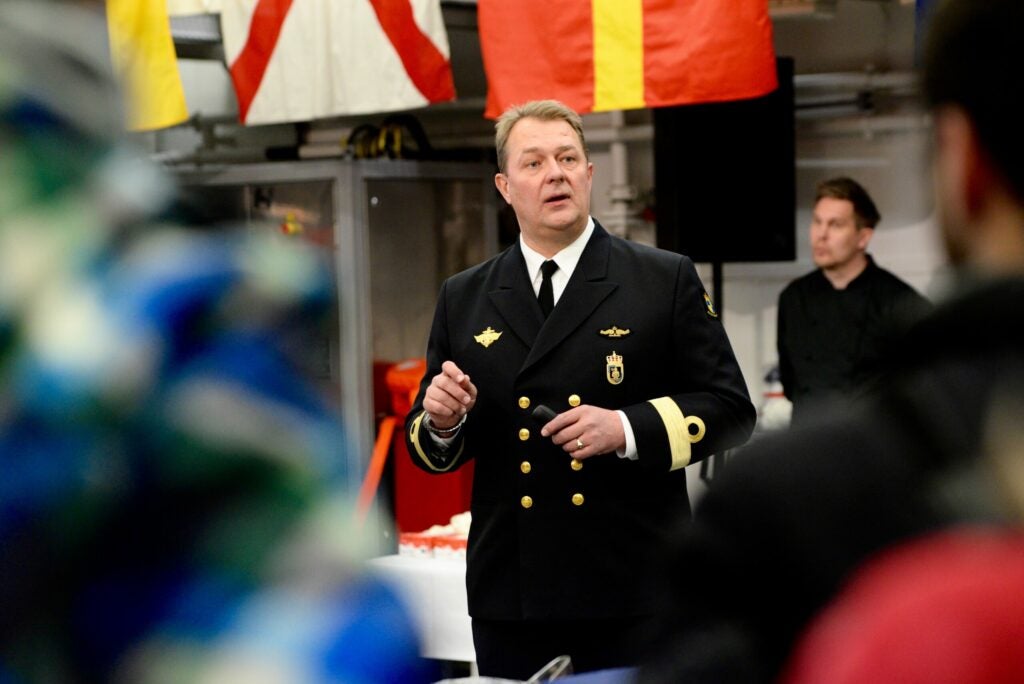 His demeanor was jovial, but his discussion of climate change impacts was quite frightening.

But today, climate change is dramatically shifting the nature of their work. Sea ice is receding in vast areas of the Coast Guard’s charge. Engeness says there’s significantly less ice for his ships to break through these days. And though we’re less than a month into 2016 at this point, he says the extent of sea ice is already lower than it was in 2012, which was the record low. That means more open water, or “blue Arctic,” as they call it, as opposed to “white Arctic.”

This brings all sorts of new challenges to the work they do. As sea temperatures rise and ice retreats, new commercial opportunities are opening up as fisheries disperse into formerly frozen waters. Prawn fisheries, for example, are moving north of the 83rd parallel. Cod and haddock can now be caught around Svalbard—a frozen landmass northwest of Norway. Tourism is increasing in Svalbard as well, in what was long considered an inhospitable landscape. The Decline of Sea Ice

The type and extent of sea ice today is not what it used to be.

A Tour of the Engine Room

The KV Svalbard falls into the category of icebreaking tugboats. The hull is a Finnish design, and the propeller is from Russia.

It has four main engines, each of them running on a high-voltage electrical motor. According to Oddvar Larsen, who’s in charge of the controls, the ship can produce the same amount of power as the city of Tromsø. But unlike many engines, he adds, “these don’t sound like a train.” Tonight he says we’re running on two engines. One would be more than sufficient, but since we’re traveling so close to populated shores, having a second one running will allow the ship to be more responsive if necessary.

The ship has 2,000 sensors that are constantly collecting data about what’s happening on board and in the environment around the boat. They are monitored in the engine room, which is run by a crew of eight people, including two officers and an electrician. 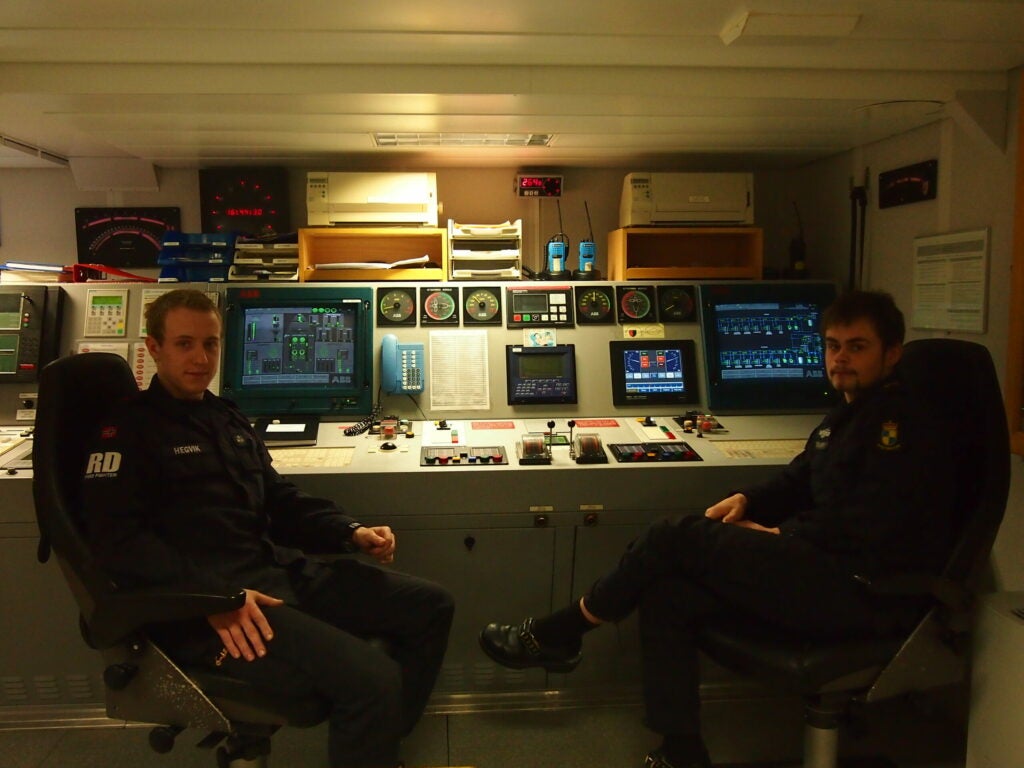 Inside the Engine Room

Two officers, an electricians, and five other members of the Norwegian Coast Guard control the engine room in the heart of the KV Svalbard.

“Mainly people think the engines are the big issue, but it’s not,” Larsen says. He describes the ship as a small community. And just like a city, challenges arise with things like water, power, etc.

The bridge is where the steering and navigation takes place. With its red lights and 360-degree windows, it looks like a scene straight out of Hollywood.

The KV Svalbard has been in use for 13 years and Larsen says it should have another 15 to 18 years under its belt. 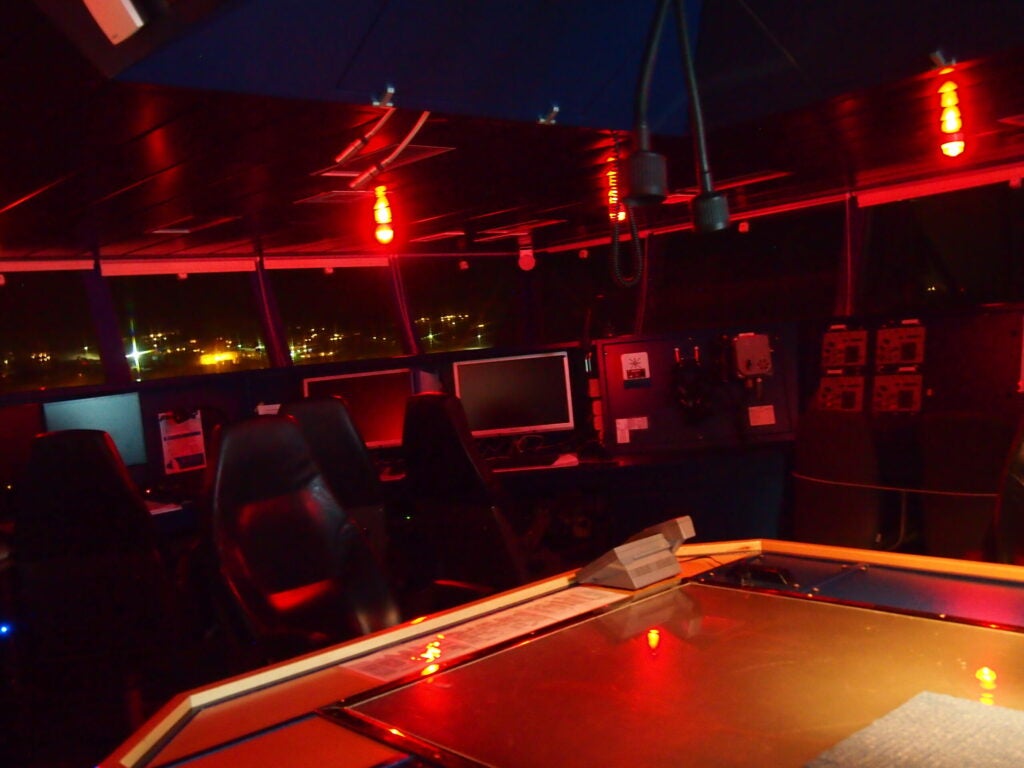 The ship is steered under these low red lights

As ice melts—faster and more furiously in the Arctic than elsewhere in the world—the northern sea route is becoming increasingly navigable. It’s a faster alternative to the Suez Canal, but since it has not often been open, and the conditions are rapidly changing, the route also brings more risks and unknowns. This means the Coast Guard has to be prepared for new kinds of search and rescue missions. Not to mention the new tensions that arise in international relations in these waters.

Threats, Pirates, and May Days

I spoke with the doctor on board, Tarald Rekv, who says the emergency calls he gets are different than most.

He recalled one particular mayday call they received, when a man on a fishing boat was having an apparent heart attack. The weather was really bad, though, so the Coast Guard got as close to the boat as they could, but was unable to board. The crew launched a helicopter from the ship’s hangar, which was able to hover above the boat. But the conditions were too dangerous to actually lower a person on board.

That’s the kind of situation you run into when you’re the only doctor in the Barents Sea, he says.

A situation that doesn’t arise too often here is pirates. “It’s too cold for pirates here,” says Navigation Officer Ingsoy, with a laugh. 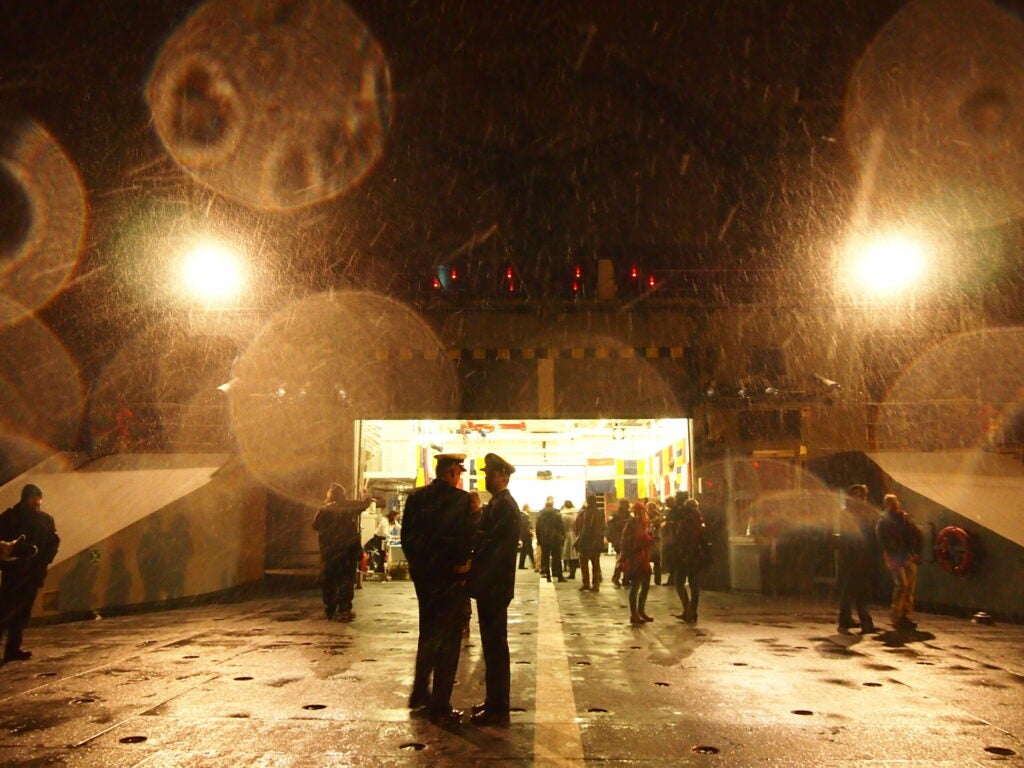 Aboard the KV Svalbard

The closest thing they have had to deal with is the Sea Shepherd. This group aims to protect species and ecosystems in the ocean, and they do this by confronting the ships they identify as transgressors on the high seas. The trouble, Rekv says, is that the Sea Shepherd doesn’t follow international law; they turn off all their technologies so they can’t be tracked. The Coast Guard therefore has to seek and follow the ship to keep an eye on them.

Last time the Sea Shepherd came to Tromsø, Rekv says, the group protested and tried to recruit members in the city. As a retort, the local restaurants all added whale beef to their menus to show their support of the fishing industry.