Making the Blackest of Black Materials

"We made carbon nanotubes that are blacker than anything else." 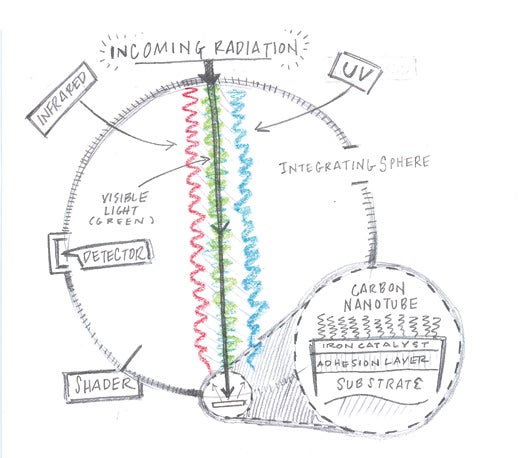 Our material absorbs more than 99 percent of visible and ultraviolet light and 98 percent of infrared light. It’s at least 10 times as good at capturing light as black paint, so we can use it in telescopes, where stray light can contaminate measurements. The nanotubes are sparse enough that light passes between them, like sunlight through trees in a forest. When photons hit the sides of the carbon tubes, they transfer their energy to the carbon’s electrons, which start to move. The light is converted to motion—heat— which dissipates in the tube. —John Hagopian, optical physicist at NASA’s Goddard Space Flight Center

To grow carbon nanotubes, we use a substrate, an adhesion layer and a catalyst: iron. The catalyst condenses on the substrate, a lot like if you boiled water and leaned over the pot with your glasses on. Then we put the whole thing in a quartz tube furnace at 1,382°F. We introduce ethylene gas, which is where the carbon comes from. The catalyst reacts with the gas, and the carbon molecules dissociate and form a tubular hexagonal lattice—a nanotube—on the surface of the iron. The nanotubes can grow in less than a minute. —Stephanie Getty, technologist, NASA Goddard

We put the nanotubes in an integrating sphere—a globe with a highly reflective coating inside. We shine light at the sample and, using a detector, measure the amount of light that bounces off the material. We put a shader near the detector to make sure it’s not getting direct radiation and skewing the results. One thing that’s kind of amazing is that the nanotubes, which are just 100 microns tall, can absorb infrared rays, which have wavelengths the same size as the nanotubes.—Manuel Quijada, engineer, NASA Goddard