Unless you’re disputing the world record in the 100-meter dash or a buzzer-beater in basketball, a single second is generally... 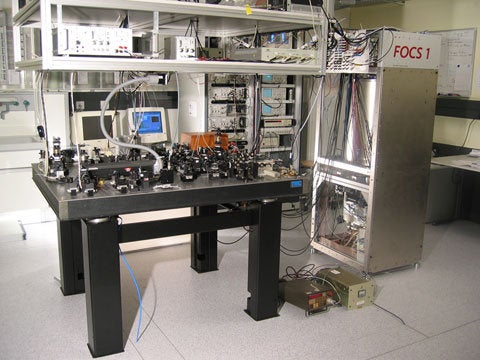 Unless you’re disputing the world record in the 100-meter dash or a buzzer-beater in basketball, a single second is generally not something worth arguing about. But today in Geneva, a single second will be the topic of intense debate as hundreds of delegates from more than 70 nations decide whether or not to kill the “leap second” at a meeting of the UN’s telecommunications agency.

Like the day inserted into a leap year to push the calendar back into alignment with the Earth’s orbit around the sun, the leap second is inserted into our time scales once every few years to bring our atomic clocks into sync with the astronomical day. Keeping those clocks in sync is crucial. Everything from communications networks to navigation systems to financial trading platforms rely on precision timing. Throw that timing off, even by a second, and problems immediately arise.

That’s why some nations–the United States perhaps most prominent–have been calling for the end of the leap second, which they say adds an extra moving part to a machine that’s already whirring along smoothly. Tinkering with our clocks simply creates an opportunity for something to go wrong. Like the “Y2K” phenomenon of a decade ago, they argue that if some systems fumble the leap second addition, catastrophic failures could ensue.

Others like Britain, Canada, and China–perhaps recalling the Y2K disaster that never was–argue that in the four decades the leap second has been in use, no such catastrophe has occurred. And in the meantime, the world’s atomic clocks remain synced to the astronomical day.

The problem here is that atomic clocks have defined the second since 1967, at which point the new definition of time was pegged to the length of an astronomical day in 1900. But the Earth’s rotation has slowed since then. To most of us, that slowing in Earth’s rotation is extremely negligible. But to something as precise as an atomic clock, the change is noticeable if only slightly. If things were allowed to run their natural courses, the Earth would keep slowing and the atomic clocks would not. Atomic clocks are already running a bit ahead of the astronomical day, which has grown longer between sunrise and sunset. Without the leap second, thousands and thousands of years from now our atomic clocks would strike midnight at mid-day.

“So what?” you might ask. And the vast majority of nations involved in this debate said the same thing when polled last year, when only 16 expressed any opinion whatsoever. Of those, thirteen wanted to abolish the leap second–and they very well may get their way today. But never you mind–any change wouldn’t go into effect until 2018, so on June 30th you’ll get your extra second whether you want it or not.