The Future Of The Internet, According To Its Father

Geeking out with Vint Cerf 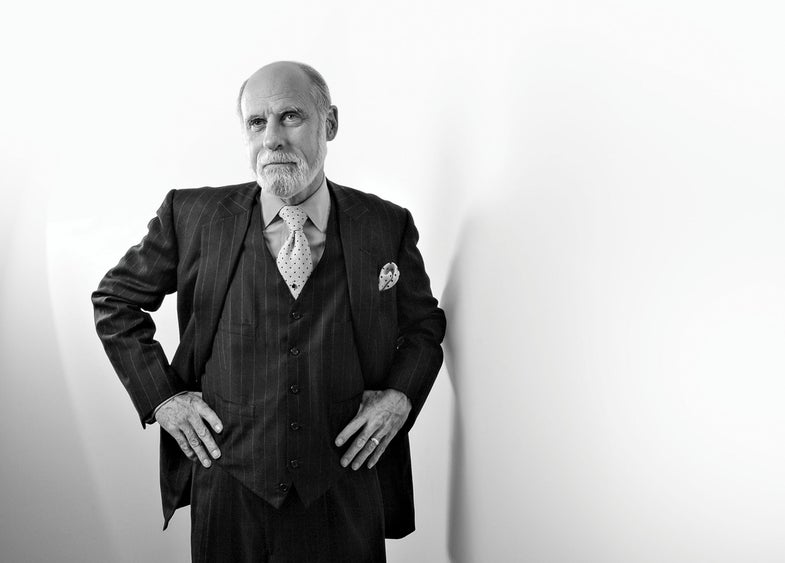 The Internet has changed a lot over its 30-something years. That terrible dial-up noise is gone; the Ethernet cord has been cut; Tinder happened. What’s next? If anyone knows, it’s Vint Cerf, Google’s vice president and chief Internet evangelist. He is considered a “father of the Internet” for developing the protocols that run it: breaking information into packets, sending them into cyberspace, and reassembling them onto your screen. Cerf has watched his baby grow up and get smarter. Now he’s envisioning how it will mature in the coming decades.

“When we turned on the Internet in 1983, having a powerful computer in your pocket was science fiction. But the Internet has evolved beyond even cellphones to encompass smart objects that talk to each other and to you. Those devices—called the Internet of Things—now need standard protocols that allow connected products from different companies to work as an ensemble.

Soon cars, buildings, cities, and people will have sensors and software that track resources, respond to crime, or take constant vital signs. In that environment, machine learning will become increasingly important—not insane robots but systems much smarter than today’s Google searches. Once we’ve connected everything to everything else, safety and privacy will be big challenges. It’s impossible to stop abuse, but we have to be able to detect it. We need to develop better security and authentication technology, as well as better international agreements to prosecute cross-country cybercrimes.

The Internet, though, will extend beyond political borders, and even beyond Earth. A prototype Interplanetary Internet already stretches between our planet and the International Space Station. Astronauts use it to communicate with Earth. The Interplanetary Internet will evolve and expand as old spacecraft become nodes in its backbone, helping pass along signals.

To handle the delays and disruptions that occur in space, we need robust protocols. I helped develop the new “bundle protocol,” which assumes the link will break occasionally. When that happens, it stores the packets of data and waits to send them until the connection becomes secure again. The United Nations is in the process of adopting it as the standard that will support manned and robotic exploration into deep space.

We initially designed the Internet to be a network of networks that could expand over time. And so it has. And so it will.”

This article was originally published in the August 2015 issue of Popular Science, under the title “Vint Cerf, On the Interplanetary Internet.”