Meet the pioneer of what might become balloon-based space tourism 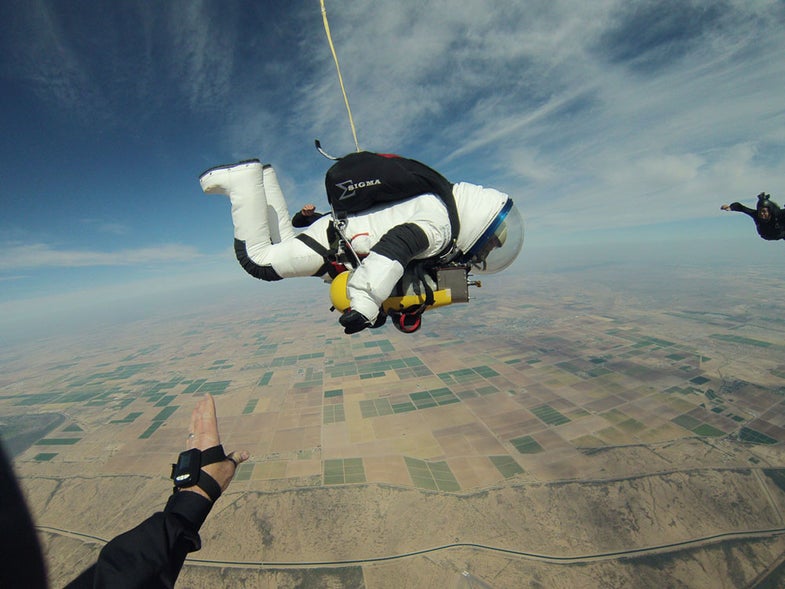 Last year, Alan Eustace, a computer scientist who previously worked for Google, made history with the world’s highest freefall — a plunge from 135,890 feet. He was lifted into the stratosphere by a massive helium-filled balloon, protected by only a spacesuit, and after drifting for a few minutes released his ride. On the way down Eustace broke the sound barrier and reached a blistering 822 mph. Some of the people who helped Eustace pull off this feat started a company, called World View Experience, to take customers to near space via balloon. We spoke with Eustace about his record-setting experience and his legacy as a space explorer. He just may prove to be the man who ushered in the era of balloon-based space tourism.

Popular Science: Why did you want to do this jump?

Alan Eustace: I’m a pilot and a skydiver and an engineer. This project ended up being the nexus of all three.

Were you attracted to the idea of setting a record?

That was in the back of my mind. But it was really more about building a life support system to explore the stratosphere. Breaking a record has been nice: I just had dinner with Joe Kittinger and my mom. That’s a fun side effect of records—you get to meet your childhood heroes.

The life support system was essentially the suit that you were wearing. How did it feel to have that on?

It was definitely big and cumbersome. The breathing is kind of noisy, and when you’re not breathing it’s eerily quiet. It’s all based on bearings, so to move in a particular direction, your arm turns one direction and then a second direction. You don’t just reach in a normal way. And of course mobility is limited. You can turn your wrists right and left really easily but as far as squeezing the glove, that’s much harder.

I watched the video of the takeoff, and it looks like it was fairly smooth.

Balloons are a beautiful mechanism for taking off. You’re perfectly balanced; it’s perfectly quiet; there’s no vibration as you’re going up. It’s very different from an aircraft in that it goes up at almost exactly 1000 feet per minute, from the ground all the way up to 135,000 feet. There’s no elevator feeling because you are not accelerating. There’s no jerky up and down.

What could you see on the way up?

The balloon was making really slow and predictable turns that would allow you to gaze out in pretty much any direction. You see every perspective, from the ground all the way up through normal airliner altitudes, to above airliner altitudes. You start seeing the curvature of the Earth and the darkness of space. As you get higher, you see how light diffuses through the different layers of the atmosphere. You look down and you see patches of fog. It’s just a multi-layered view of what the world looks like.

There’s this thing called the detachment effect: Psychologists say you feel you’re so far away from the Earth that there’s some question about whether you want to come down. Once I got up there I was perfectly happy to come back down. I had the possibility of lingering there for up to an hour but I stayed just long enough to make sure the balloon had stabilized and to go through the normal countdown checklist. I doubt I spent more than five minutes up there. And now that I’m down I’m thinking, well, maybe I should have stayed a little longer.

Can you describe the moment when you detached and the experience of freefall?

Somebody from the ground asked me on a radio call to verify that it was okay to drop. Then they had a countdown—Five, four, three, two, one. You can hear the drop—there’s a little sound—and the next thing you know you’re in freefall. But it’s zero G. There’s no way you can tell that you’re actually falling. You could be in a pool at that point.

Because of a little bit of asymmetric drag, I ended up doing a very, very slow backflip. That turned out to be wonderful because it let me see the balloon that I was falling away from. It gave me a sense of perspective. So I went around a second time. It also let me see the drogue system that we had carefully designed [to help control the fall]. It was probably about 17 seconds before it righted me and then I was facing Earth. The system that we had developed for spin resistance was working perfectly; there were no spins. I was really, really happy that the time and effort that we spent had come up with a system that was working flawlessly.

Does the sensation change as you descend?

I broke the sound barrier 31 seconds into jumping. It takes 51 seconds to get to max speed, 822 mph. Normally in freefall you associate speed and wind together, but in this jump, it’s exactly the opposite. When you hear wind it’s an indication that you’re slowing down. By the time you reach pullout altitude you’re going pretty much the speed of a normal skydiver in freefall—110, 120 mph—and then you open your parachute. You slow down a little bit more as you flare, and then you land.

How do you feel about commercial stratospheric balloon tourism?

It certainly would be a lot easier than the route I took! It’s an amazing perspective at those altitudes. Astronauts get that view but balloons are such a dramatic contrast from a rocket experience. I think there’s something special about being in a balloon and seeing the slow progression from the world that you know to the world that you’ve never seen before. It will be wonderful to have hundreds and thousands of people, ordinary people, get the chance to view the world the way that I did.

Do you think the market will be that big?

I think we’re in a really transformational time. My generation had Apollo but this generation is going to see the personalization of space in a way that no other generation has had the ability to do.

What do you think will motivate the typical balloon tourist?

Life is a series of experiences, right? People get to choose what set of experiences is going to make up the portfolio of their lives. You could choose to add the idea that you’re not just terrestrial. You can go up in the air; you can see space; you can internalize what it’s like to be off the planet.

It’s not just the view. Think of your first airplane ride. My dad put all of us on a jet. We flew from Orlando to Daytona. I’m sure they barely put the wheels up before they went back down. But for me, the idea of leaving the ground was such an amazing thing. I think people are going to see this in the same way. They’ll have stories to share. They’ll connect with the aviation pioneers generations before them, who took the barnstorming trip and were the first in their whole city to ever see it from above. There’s a sense of untapped adventure and exploration.

And it’s not something that only the fittest of the fit can do. It’s not like climbing Mt. Everest, which you spend years training for and is extremely physically exerting. This is an experience that will be accessible.

Your flight helped to inform a lot of the technologies that will allow this type of tourism to happen. Did you anticipate that?

When you start a project you have a dream but you don’t have plan. As you get farther into it you start to develop a plan, and then you build the technology, and then you find out whether the plan is actually going to work. I think this project gave World View the ability to see a different approach to space tourism. And I also think that my team—after watching me go up there—were jealous, and they want to have the same experience themselves.