This Smell Synthesizer Lets You Sniff And Play Flavors Like Music 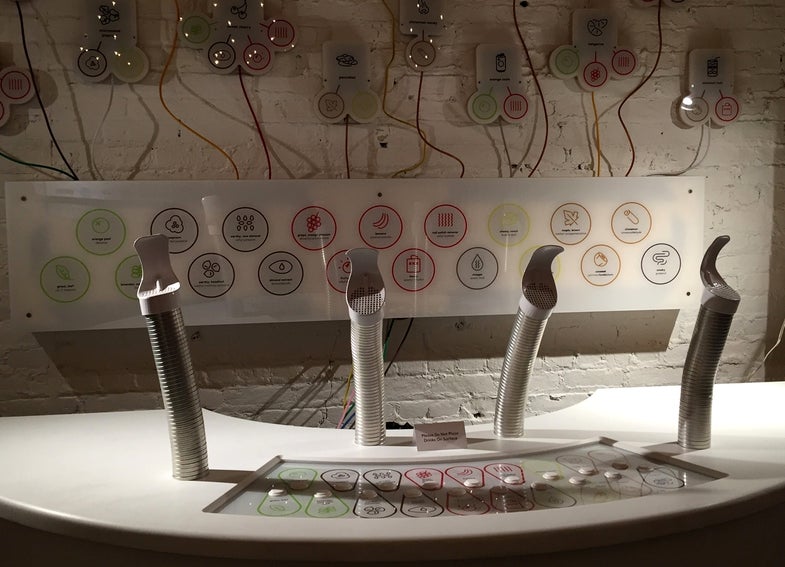 What do you get when you mix “cheesy vomit” with “popcorn”? What about when you add “hazelnut,” “coriander seed,” and a whiff of “smoke”?

Starting October 28, you’ll have a chance to find out. At “Flavor: Making it and Faking It,” the debut exhibit from the Museum of Food and Drink’s MOFAD Lab, visitors can play these and other notes on the Smell Synthesizer, an interactive display that lets visitors explore the connections between chemicals and sensations. (Tickets are available online.)

There are a few precursors to the Smell Synthesizer. In 1902, the poet and bizarre aesthete Sadakichi Hartmann played a “perfume concert” at Carnegie Lyceum, using electric fans and essential oils to transport his audience on a journey through the Far East; he was booed off stage in less than five minutes. A 1922 issue of Science and Invention introduces the “Smell Organ,” a keyboard that plays scents corresponding to the musical scale. An illustration of the instrument shows a maestro with a Beethoven haircut playing a piano fitted out with valves and jars, but there’s no evidence that the machine was ever built. In Michel Gondry’s 2013 film Mood Indigo, based on Boris Vian’s 1947 novel L’Écume des Jours, the Pianocktail mixes up drinks to match the song played on the piano.

But the Smell Synthesizer at MOFAD Lab is less like a Steinway, and more like a Moog modular synth, albeit one with fat, arcade-style buttons and corrugated tubes. How did MOFAD Lab design and build its instructively smelly displays? The technology that drives the Smell Synthesizer and the museum’s other interactive smell displays has its origins in the laboratory — specifically, in the olfactory laboratories of the Monell Chemical Senses Center, the Philadelphia research institute investigating the sciences of taste and smell.

In the early stages of planning the exhibit, the MOFAD team brainstormed possible ways to make the complexities of flavor comprehensible and interactive. (I’m on MOFAD’s advisory board, and helped out on other parts of the exhibit, which document the history of flavor additives and the growth of the flavor industry.)

Print-on-demand flavor strips, where visitors could choose their own flavor chemical adventures? Some sort of high-tech everlasting gobstopper, where each successive layer illustrates a different flavor interaction? “We wanted something that gave visitors a sense of limitless possibility,” explains Emma Boast, MOFAD’s program director, “and that also made these ideas about smell and taste, and how your brain might interpret the same chemical in very different ways, less abstract.”

Then Dave Arnold, the cocktail technology wizard who is the museum’s founder, came across a reference to a “Virtual Aroma Synthesizer” in Mark Schatzker’s The Dorito Effect. Developed by Givaudan, one of the world’s largest flavor companies, the aroma synthesizer is a “trumpet-shaped device” that puffs out different versions of flavors, and is used by the company to market-test and refine their products. MOFAD’s team wondered whether a similar machine could be used in their exhibit. However, they soon realized that Givaudan’s proprietary technology wouldn’t be practicable for the museum. 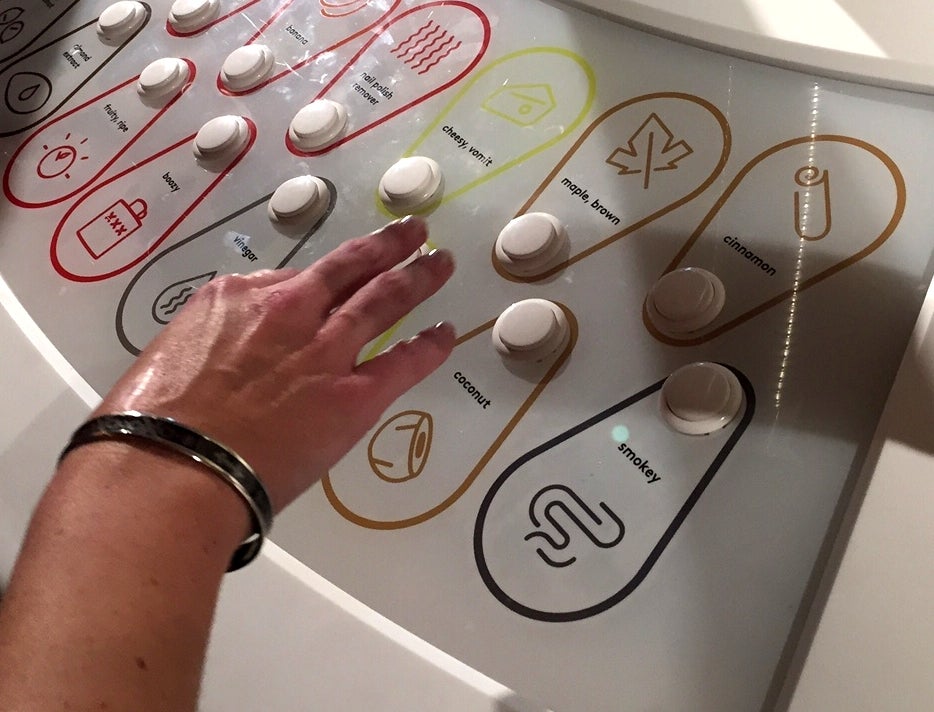 Enter Joel Mainland, a sensory neuroscientist at Monell. Mainland’s lab is searching for what he calls “primary odors.” By mapping patterns of olfactory receptor activity in response to chemical stimuli and correlating them with human sensory responses, Mainland hopes to identify a limited set of chemical compounds that can be combined in different ways to reproduce the entire human smellscape, the same way that a color printer can reproduce a full-color image using only three different colors of ink. But while there are only three types of photoreceptor cells in the human eye, our olfactory system has around 400 different receptors.

In order to solve what he calls a “400-dimensional problem,” Mainland’s lab uses an olfactometer, a device that releases precise quantities of volatile aromatic chemicals, and that scientists use to study how subjects perceive and respond to odors. Many olfactometers have only one channel, or at most a handful — which is suitable for research that investigates things like sensory thresholds or the links between genes and olfactory receptors where only one compound is being tested at a time. But because he is interested in the ways that blends of different chemicals affect sensation and perception, Mainland needed a multi-channel olfactometer that could combine dozens of compounds, was relatively cheap to build, and was simple to modify and program. 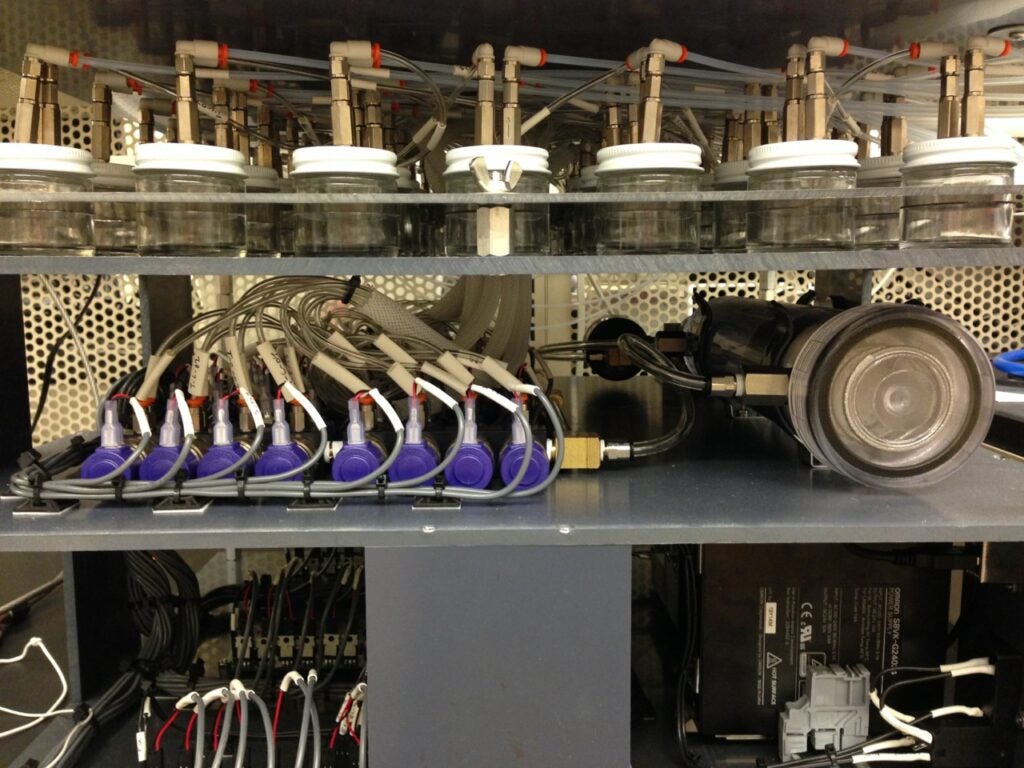 Mainland explains that researchers working on smells often end up building their own olfactometers, tinkering with the design to get the combination of features they need. (He learned some of the basics from his graduate advisor at UC Berkeley, Noam Sobel, who now heads the neurobiology department the Weizman Institute. “Before he was a neuroscientist, he was a plumber,” Mainland said. “He builds great olfactometers.”)

His current, 48-channel olfactometer is the one that Arnold, Boast, and others on the MOFAD exhibit team witnessed in action during a visit to Monell earlier this year. “The whole lab was redolent of caramel cotton candy and fruity notes,” Boast recalls, “It was quite overwhelming.”

But it also seemed like the perfect solution. For the MOFAD team, the attraction of the olfactometer used by Mainland’s lab was that it was exquisitely customizable and programmable. The basic design could be scaled up and down, to add or subtract inputs. With some modifications — including an exhaust system that continually clears the air, and a user-friendly interface by Labour, a Brooklyn design team — the olfactometer plays a key role in three of MOFAD Lab’s interactive displays.

With the press of a button, visitors can choose and change what they are smelling.

With the press of a button, visitors can choose and change what they are smelling. A scented stream of cool air emerges from the gridded top of a white corrugated tube, whose outer edge curls inwards like the tip of an elephant’s trunk. One particularly effective display shows how perception shifts . Press the top button, and you get a whiff of old, cold coffee, stale grounds in a soggy filter at the end of the day. Press the bottom button, and you get a noseful of real skunkiness, furfuryl mercaptan. But press both buttons at once, and the two unpleasant compounds blend together to evoke fragrant, fresh-roasted coffee.

But for the full olfactometer experience, head over to the Smell Synthesizer.

Jack Fastag, senior flavor chemist at David Michael, a Philadelphia flavor company, worked with MOFAD to program the synthesizer — that is, to select the chemical notes it should play. His assignment was to choose a set of no more than twenty compounds that could create as many different smells as possible. The notes he chose are described in terms of both sensory qualities and chemical names, and range from the totally pleasant and immediately familiar (coconut, or gamma hexalactone) to the less pleasant but just as familiar (the aforementioned “cheesy, vomit,” a.k.a. butyric acid) to compounds that are described in terms that sound not at all food-like, but that are (for instance, “nail polish remover,” ethyl acetate, which adds a pop of sweet effervescence to fruity flavors).

Fastag also developed recipes, chords of two to four chemicals, posted above the synth to give some structure to free play. Play a triad of isoamyl acetate, isoamyl alchohol, and ethyl acetate, and you get, distinctly, candy banana. Add one more note (cis-3-hexanol, described as “green leaf”), and the banana unripens, transforming into a bunch of green bananas.

But visitors who mess around on the Smell Synthesizer are encouraged to depart from the score, to explore their own combinations, discordant chords of multiple odors, or arpeggios of different notes in sequence, perhaps discovering, in unlikely combinations, curious phenomena, sudden perceptual shifts, nice harmonies, unexpected pleasures.

It’s instructive, but it’s also really fun. As Boast puts it, “we want people to play like a flavorist.”

Nadia Berenstein is a Ph.D. candidate in History & Sociology of Science at the University of Pennsylvania; her dissertation tells the story of the history of synthetic flavors and flavor science in the United States. You can read more about her research on her blog, Flavor Added, or follow her on Twitter @thebirdisgone. 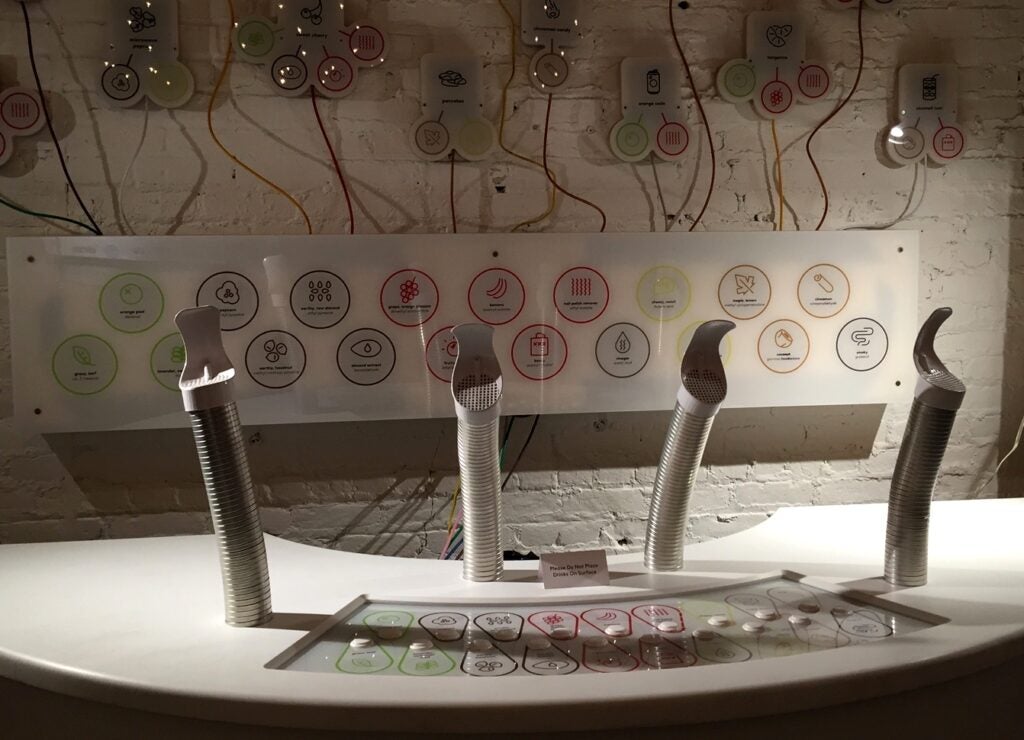