The CIA’s Bold Kidnapping of a Soviet Spacecraft

One day in late 1959 or 1960 — dates aren’t totally clear in declassified documents — a crack team of four CIA agents worked through the night in stocking feet taking apart a kidnapped Soviet Lunik spacecraft without removing it from its crate. They photographed every part and documented every construction element, then perfectly reassembled the whole thing without leaving a trace. It was a daring bit of espionage at the early years of the space race. Intended to level the playing field between two international superpowers, it was a heist that risked turning the cold war hot. 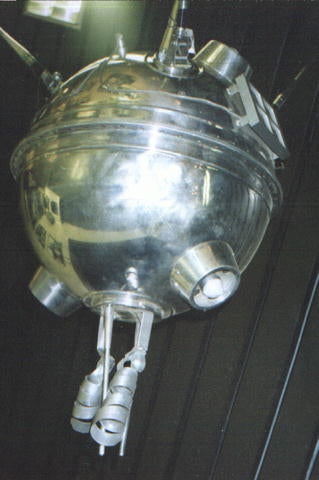 The Soviet Luna 1 ended up in orbit around the Sun.

On January 2, 1959, the Soviet Union kicked off its Luna program, sometimes called Lunik by the Western media, with the launch of Luna 1. This first spacecraft missed the Moon, but the next hit the target and became the first spacecraft to impact the lunar surface in September of that year. A month later on October 7, Luna 3 returned history’s first ever pictures of the Moon’s farside. It was a stunning year for the Soviets on the Moon, one in which the United States only racked up a handful of failed lunar missions. The effect, aside from a blow to national morale, was a devastating effect on the American psyche. However exciting these missions were to space fans, they brought with them the terrifying reality that the enemy had bigger boosters and more advanced technology.

The disparity between American technology and the perceived Soviet power led to an intelligence program run by the CIA. By studying Soviet spacecraft and space missions, the agency hoped to not only anticipate launches and their impact on the public but also to adjust American launch schedules to better keep pace with the enemy. Even educated guesses about Soviets plans would help the United States know where to concentrate its efforts to hopefully overtake the Soviet Union in space. It would be useful for the US armed forces to have a handle on Soviet hardware to know what might give way to an offensive military spinoff. And this intelligence would also help American leaders be better prepared to respond to a new Soviet threat should one arise.

This intelligence effort focused on what was available from afar. Namely electronic intelligence, tracking the telemetry and intercepting data downlinks to gain a complete understanding of Soviet missions. But this was not without its challenges. US agents had to anticipate launches to be ready on time, and they were then forced to sift through telemetry without knowing the values of data assigned to channels or baseline measurements. Post-flight analysis was another important element of this intelligence program. Taking as complete a data set as possible about the spacecraft’s peak altitude, target body, and rocket stage landing site at the end of mission to extrapolate data about the size and power of the boosters launching these space missions. But all this was only part of the puzzle, and because each mission was different, each was like a “fresh flare in the sky” that demanded a new and often imaginative effort to learn what was really going on. And nothing was a more daring or imaginative intelligence effort than the decision to kidnap a Lunik upper stage to really understand this spacecraft.

Sometime between the end of 1959 and 1960, the Soviet Union toured several countries with an exhibit of its industrial and economic achievements. Among the artifacts were a Sputnik and a Lunik upper stage that contained the payload, the latter freshly painted with viewing windows cut into the nose. At first blush, many in the CIA assumed the touring Lunik was just a model, but some analysts suspected that the Soviets might be sufficiently proud of the spacecraft to bring a real one on the tour. These suspicions were confirmed when CIA intelligence agents managed to gain unrestricted access to the spacecraft one night after the exhibit closed. They realised it wasn’t a model. It was a real production article. The agents gleaned what they could in 24 hours but desperately wanted a better look. They wanted to get inside the Lunik.

This was easier said than done. The Lunik was heavily guarded, usually with a constant garrison so examining it before or after the exhibit closed was ruled out. But the Lunik did move around, which meant that it could be “borrowed” during the transport chain if there was a weak link. And there was. The spacecraft, as well as every other piece of the exhibit, was transported in a crate by a truck to a rail yard where it was loaded onto a train and moved to the next city. At the rail yard, a guard took note of each incoming crate. What this guard didn’t have was a list of cargo and and expected delivery time for each crate. The CIA hatched a plan to steal the Lunik for a night and get it to the train station by morning for its journey to the next city.

Finally the night came when the team of CIA agents put their plan into action. They arranged for the Lunik to be the last truckload carried out of the exhibit hall. It did, and trailing it were the CIA agents in plainclothes, disguised as locals looking out for an expected Soviet escort. But more Soviet guards never materialised. With the coast clear, the CIA stopped the truck at the last turn off before the train station, escorted the driver to a hotel, covered the truck with a tarp, then drove it to a nearby salvage yard that was selected for the night because of its surrounding ten-foot tall walls. 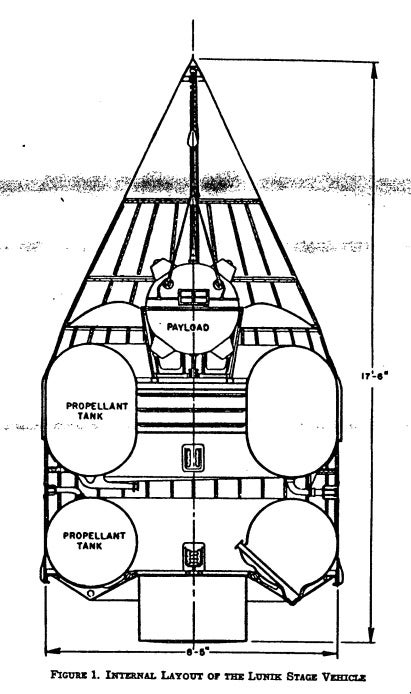 A drawing of Lunik’s internal arrangement from a CIA report in 1961.

At the rail yard, the guard took stock of the incoming crates and left to go home when he assumed the last had arrived. More CIA agents tailed him for the night to make sure he didn’t go back to work early.

Back at the salvage yard, the CIA team backed the truck into a narrow alley, closed a gate, then froze. They waited anxiously for a full half hour to be sure they hadn’t been followed. Confident they hadn’t been seen, they finally turned their attention to their charge. They had studied the crate and knew the sides were bolted together from the inside making the roof their only access point. Two men set to work removing the roof without leaving any marks on the wooden planks—luckily the crate had been opened so many times the planks were already a little worse for wear—while the other two prepared the photographic equipment.

With the roof removed, the men saw that the Lunik took up almost the full space of the crate; they wouldn’t be able to walk from one end to the other. So they divided and conquered, two men working on the nose and two on the tail end. They descended in socks by rope ladders and started dismantling the Lunik by flashlight. They took a full roll of film of the marks on the spacecraft’s antenna and sent it out for processing the make sure the cameras were working. Happily, word came back the pictures were perfectly clear.

The men at the tail end removed the base cap to study the engine area. Though the engine was gone, the mounting brackets, fuel tank, and oxidiser tank were still in place, giving the experts a sense of how big and powerful the engine was. At the nose end, the men discovered that a rod ran though the spacecraft to support the centrally loaded payload fixed in place at the front by a four-way electrical outlet acting as a nut screwed into the rod. This was covered by a piece of plastic with a Soviet seal. It was their only way in, but if the seal was missing the Soviet guards would know someone had tampered with the spacecraft. Refusing to be stymied by a piece of plastic, they checked with CIA personnel offsite that the seal could be duplicated in time to replace it. Their offsite colleagues said yes, giving them clearance to cut it off. The seal was sent out for duplication while the men began exploring Lunik’s insides.

The small team worked through the night. As sunrise approached they began putting the Lunik back together, careful to leave no traces of tampering. They affixed the fake seal, put the cover back on the crate, and loaded the whole thing back onto the truck. The original driver was back at the helm by 5 o’clock in the morning and the truck was waiting at the rail yard for the guard when he came back to work at 7 o’clock in the morning. He unquestioningly added it to his list, and the Lunik went onto its next city with the rest of the exhibit.

The CIA’s intimate look into the Lunik’s construction ultimately played a fairly important role. Knowing Lunik’s dry weight and true size allowed experts to determine it’s wet weight, which was invaluable for the agents who tracking subsequent launches. With this major variable known, experts could extrapolate the true power of the booster that launched this spacecraft. And this in turn allowed Americans experts to work backwards to determine the Soviets’ true capability with their existing hardware, and more importantly determine the payload limits of their existing technology. Kidnapping the Lunik helped the United States determine what the Soviets couldn’t do without a massive technological breakthrough, information that helped the national leadership and heads at NASA set goals and shape timelines that would help the Americans match and ultimately overtake the Soviet Union in space.

Sources: The Kidnapping of the Lunik; Intelligence for the Space Race.

Help us do science! I’ve teamed up with researcher Paige Brown Jarreau to create a survey of Vintage Space readers. By participating, you’ll be helping me improve Vintage Space and contributing to SCIENCE on blog readership. You will also get FREE science art from Paige’s Photography for participating, as well as a chance to win a t-shirt and other perks! It should only take 10-15 minutes to complete. You can find the survey here: http://bit.ly/mysciblogreaders/.