Museum Of Food And Drink Explores The $25 Billion Flavor Industry 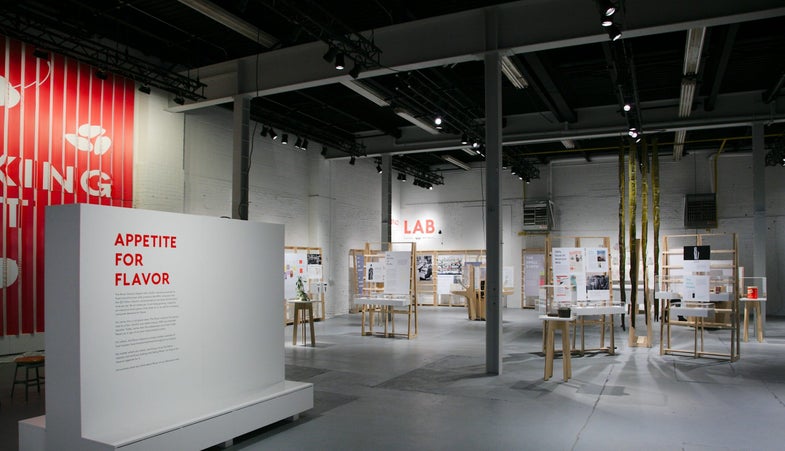 Before this week, the Museum of Food and Drink was largely conceptual. In the mind of Dave Arnold, an author, food history obsessive, and the founder of groundbreaking New York City bar Booker & Dax, MOFAD was not only already built, it had already begun planning future exhibits that could tour the country and enchant the public.

But MOFAD had to first open, which it did earlier this week. The 3,000-square-foot space in the heart of Williamsburg (it used to house a parking garage), on which the museum holds a five-year lease, is far removed from the museums of elementary school class trips. “We wanted MOFAD to look like Willy Wonka meets the Eameses,” says Peter Kim, the museum’s executive director.

The launch has been promised ever since Arnold birthed a Kickstarter in 2013 to raise funds for a MOFAD pop-up. Those contributions helped build MOFAD’s first exhibit, a pop-up called ‘BOOM! The Puffing Gun and the Rise of Breakfast Cereal,’ but Arnold wanted to establish a permanent brick-and-mortar location for his culinary deep dives.

“We are not a science museum,” he told me by phone. “Science is just a lens. We are concept- and experience-driven, and we wanted to showcase the grand story of how our food system got to be the way it is.”

The first exhibit, titled ‘Flavor: Making It and Faking It,’ is an expansive look at the modern age of the flavor industry, which began in the late 19th century when German chemists discovered vanillin, the primary chemical compound of the vanilla bean. When the MOFAD team first began to workshop ideas, which also included an opening exhibit on food on the battlefield or a look at food from farm to toilet (says Kim, “That didn’t seem like the best first course”), the concept of flavor was much more broadly defined. 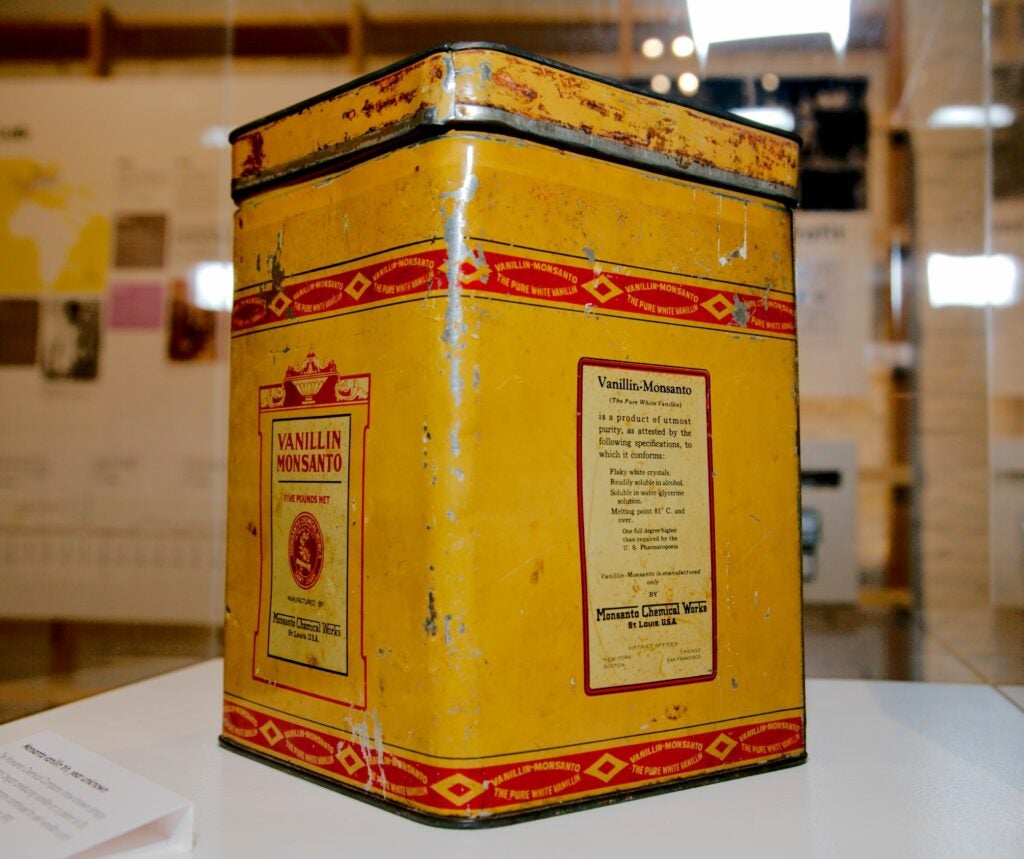 On display at the Museum of Food and Drink.

Flavor was the starting point, but once MOFAD began to consider the physiology, the cultural nuances, and subjectivity of flavor, Arnold and co. realized the museum’s scope had to be both narrow and broad. “There is no way to imagine the modern food system without flavoring,” he says.

The entire exhibit is contained in one room, which helps the museum’s flow. MOFAD claims a few current museums as inspirations (Arnold and Kim both named the Museum of the Moving Image in Queens), and it follows the current trend overtaking museums, a tactile and immersive experience that encourages guests to interact with each of the dozen stations.

There are modified gumball machines dotted throughout the room, each filled with a different flavor tablet that MOFAD specifically designed. Want to know the difference between vanilla and vanillin? Turn a machine’s knob and out pops an sample taste of the chemical (MOFAD is careful to explain that all flavor is chemically identifiable — “whether it comes from a lab or from a lemon or from lemongrass,” says Kim). 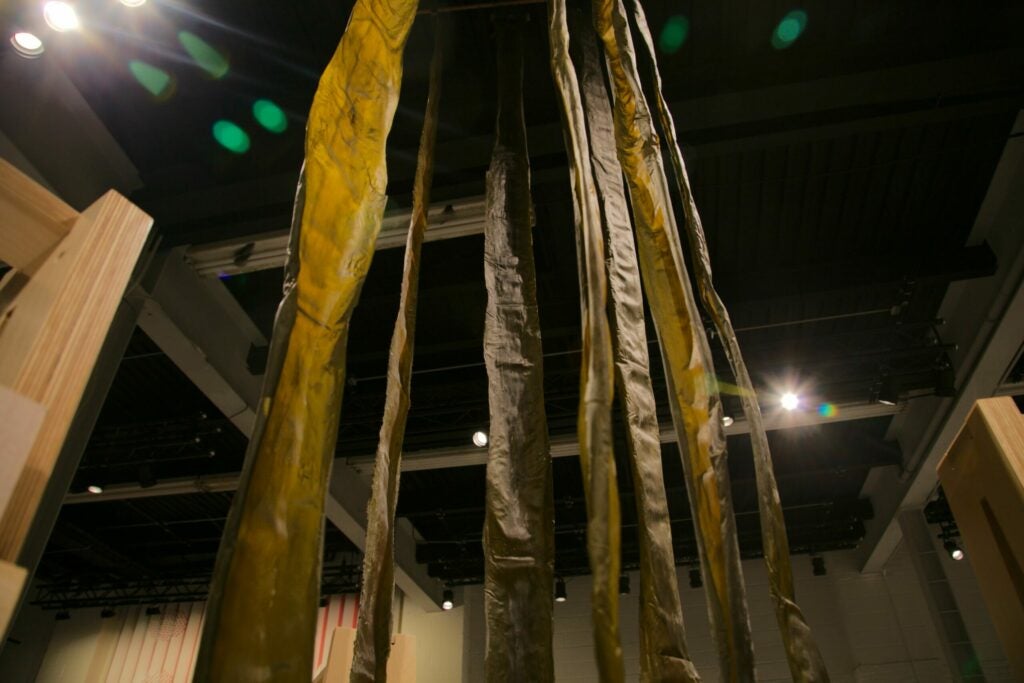 Streamers of glutamate-rich kombu seaweed stretch from ceiling to floor

Taste MSG in its unadulterated state, and then sample its umami effects in tomato, mushroom, and seaweed tablets. “Umami and MSG helped the flavor industry ride the coattails of the processed food industry,” notes Kim, “but we couldn’t just talk about umami and say, ‘This is what it takes like. Trust us!’ Let’s actually give people umami.”

MOFAD’s most striking exhibit, and what makes the $10 single-admission tickets worth the cost, are the Smell Synthesizers, which were designed (with an assist from the olfactory laboratories of the Monell Chemical Senses Center) and created by Arnold. “He was working around the clock for months,” says Kim.

There are several smaller synths, which allow a visitor to explore individual smell experiences: whether a concord grape smell is natural or artificial, for instance, and how a combination of furfuryl mercaptan (known as the ‘skunk note’) and coffee concentrate yields a Taster’s Choice moment of freshly brewed java. 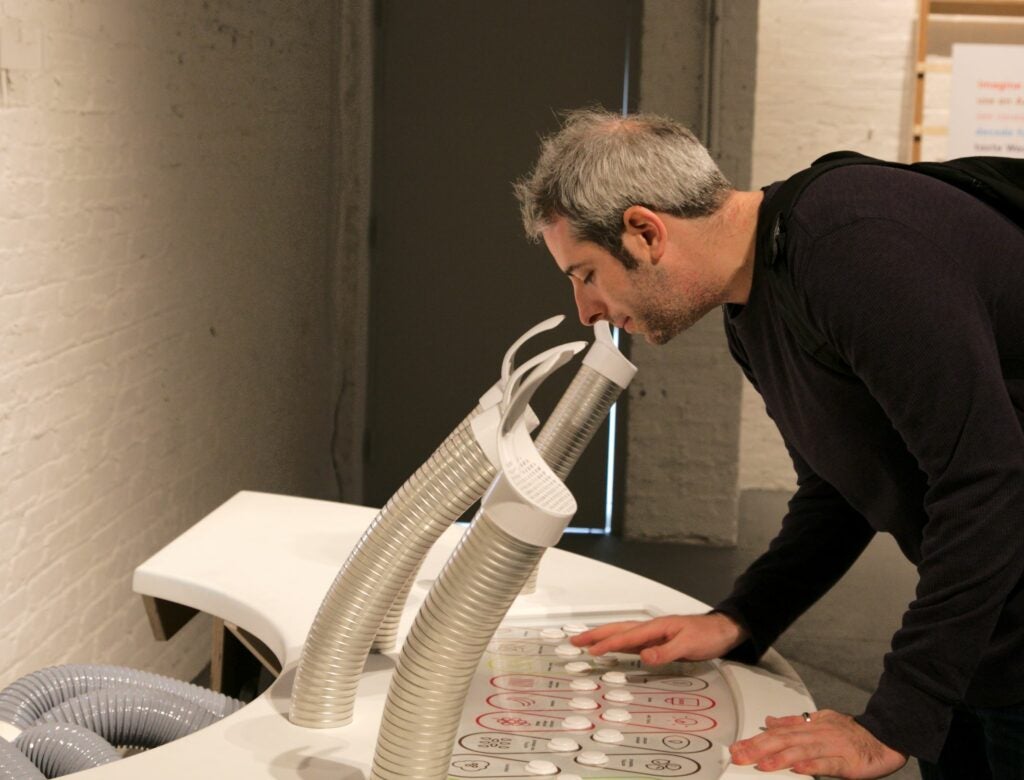 Matt Giles inhales a custom combination of scents from the synth

Arnold also designed a synth with 19 different olfactory components that creates smells as varied as ripe (or green) banana and vomit. “We wanted to show how combinations can create surprising results,” says Kim, “but also explain the notion of how flavors are built. This a cheat sheet — imagine what a flavorist could do with 400 compounds?”

(To ensure the space didn’t become a stink bomb, the MOFAD team researched marijuana forums and installed a scent-hiding device used by weed farms that pumps air through activated charcoal.)

What’s next for MOFAD has yet to be determined. An optimized version of the Flavor exhibition could go on the road, which would then open up the space for whichever concept MOFAD wants to investigate next. “We have a list a mile long for what we want to do,” says Arnold.

We’ve come a long way since the first German vanillin. And we’re glad that, after years on the drawing board, there’s now a place where one can spend an afternoon touching, smelling, and learning how flavoring has evolved from early canned vegetables to Doritos Loco Tacos and kiwi strawberry drinks, and become a $25-billion industry. 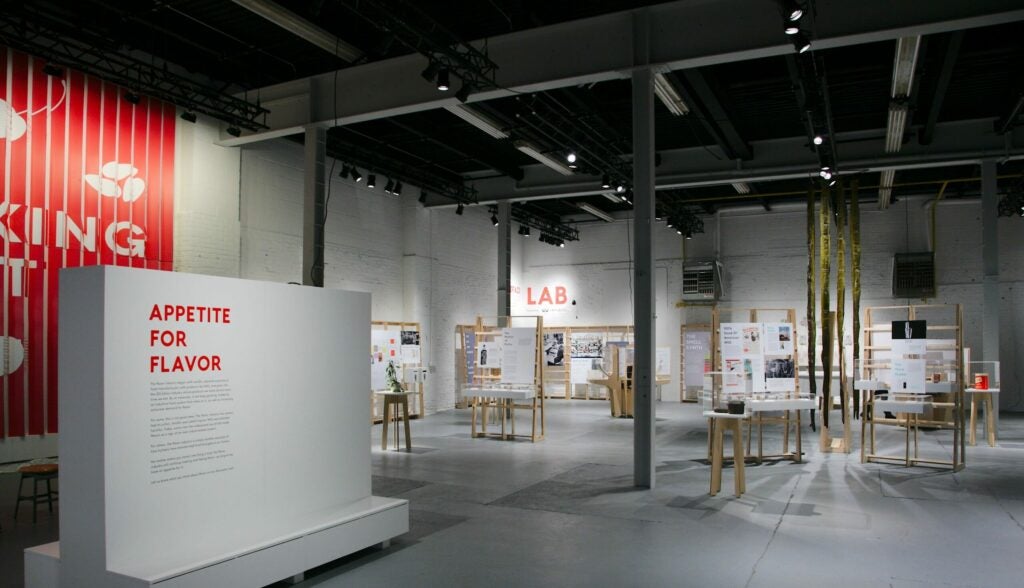