Do men have hormonal cycles?

Short answer: Ever heard of man-struation? 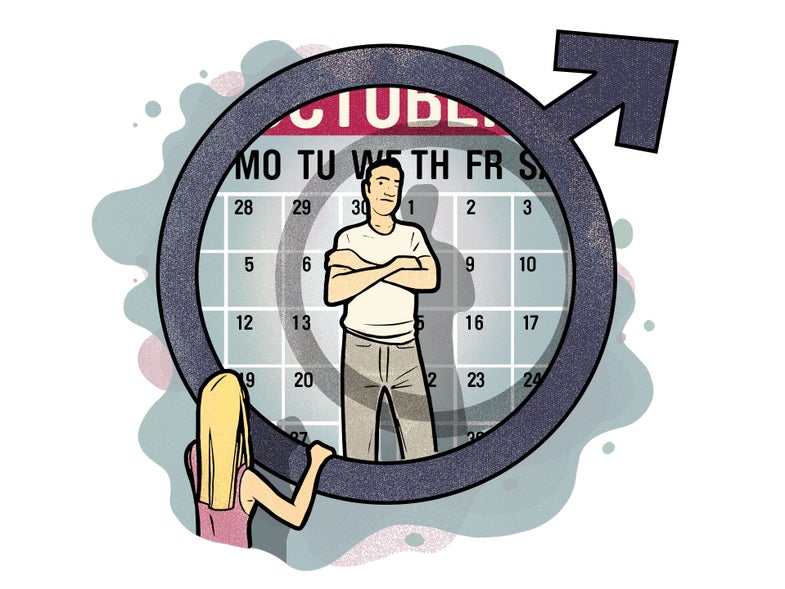 Men do go through hormonal cycles. That much is established. Their testosterone levels tend to peak first thing in the morning, perhaps in concert with circadian rhythms, and then diminish over the course of the day—though exercise can cause fleeting spikes. What science has yet to show is whether hormones dip and rise over weeks or months, as women’s do.

Some researchers believe that male hormones vary with the seasons. A 2003 study found that the testosterone levels of men in one Norwegian town bottomed out in summer and reached a high in late fall. A study of Danish men found similar seasonal variations (on a slightly different schedule). If these rhythms are real, they might have to do with sun exposure, summer workouts, or winter weight-gain. But studies done in sunny San Diego and snowy Boston failed to replicate the Scandinavian findings. In a 2012 review, urologists at Baylor College of Medicine in Houston concluded that some “evidence exists to support the notion” of seasonal cycles but cautioned that more research was needed.

Endocrinologist Peter Celec of Comenius University in Slovakia, thinks that men have a straight-up monthly hormonal cycle too. In 2002 he published a study showing that both men and women experience roughly lunar rhythms of testosterone; the levels in men’s saliva peaked dramatically on day 18 of a 30-day cycle. Celec’s findings have not been replicated or accepted in the field, yet he remains convinced: “I have searched the literature for negative findings, but I have not found anything.”

Celec adds that if women didn’t bleed, the research establishment would likely be skeptical of their monthly cycles too.

ask anything
Ask Us Anything
Health
hormones
menstruation