This Ancient Skeleton May Be Humanity’s First Murder Victim

That we know of, anyway 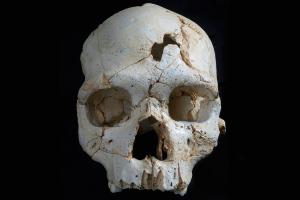 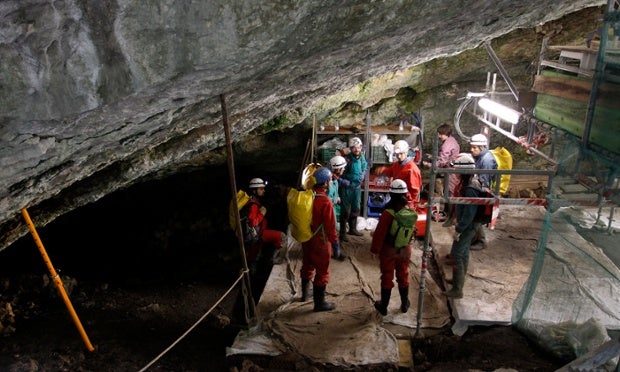 Excavators have spent years recovering 28 hominin skeletons from the Sima de los Huesos pit in northern Spain, a cave that mean “pit of bones.” After finally digging them all up, researchers made a surprising discovery–one of the specimens has giant holes in his head. The man lived 430,000 years ago, and the holes suggest a deliberate attack; in other words, he could be the first murder victim that humans have ever uncovered.

This ancient victim was male and likely in his 20s. A DNA analysis of one of his companion skeletons suggests the tribe may be ancestral to both the Neanderthals and the Denisovans–the Neanderthals’ east Eurasian contemporaries.

Holes in His Head

Nohemi Sala from Complutense University of Madrid and her colleagues used forensic techniques to discover how the holes formed. Over time, the bones have broken into 52 pieces, but the fragments fit together to form a skull with two gaping holes on the left side of the forehead. The edges of these holes are consistent with a fresh bone fracture. They also found that the holes were about the same size and shape, which suggests two purposeful blows with the same object. The scientists believe the assailant was right-handed and armed with a spear or an axe.

“We are pretty sure that these are not circumstantial injuries,” Sala says. “Since either of these wounds would have likely been lethal, penetrating the brain, the presence of multiple wounds implies a deliberate act.”

Though this unlucky fellow is the first homicide victim we know of, that doesn’t mean he is the first murdered human ever. The first human skeleton ever discovered is Lucy, and she is just under 3.18 million years old. This discovery does show that violence is not a new concept, however.

“One implication of the study is that murder is a very ancient human behavior,” says Rolf Quam, one of the researchers.

This battered skeleton also provides evidence that humans were already engaging in funeral rituals. There are two ideas about the pile of skeletons in which this victim was found: Either they all fell to their deaths in a vertical shaft over time, or they were thrown into the pit. Because this skeleton was clearly dead before he was placed in the pit, this new discovery supports the second notion of some sort of mass burial.

“It’s not possible to have an accident down there if you’re already dead,” Sala says. “The only possible manner by which a deceased individual could have arrived at the site is if its cadaver were dropped down the shaft by other hominins. Middle Pleistocene hominins were already engaging in funerary behavior.”