Time isn’t real. Here’s how people capitalized on that.

Louis Armstrong and Albert Einstein showed that hours, minutes, and seconds can be stretched by perception and experience. 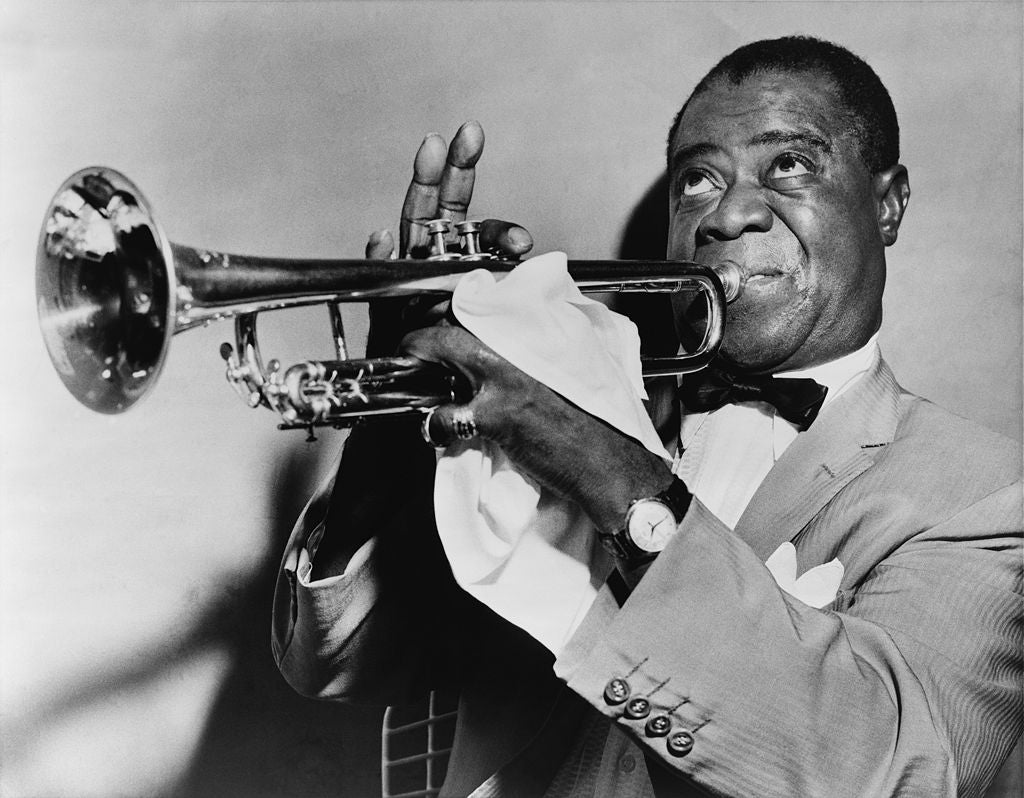 Louis Armstrong's jazz beats changed how musicians and their audiences played with the confines of time. Library of Congress
SHARE

This excerpt was taken from The Alchemy of Us by Ainissa Ramirez, published by MIT Press on April 7, 2020.

For generations, scientists such as Sir Isaac Newton believed that time was immutable and unchanging. Newton was of the school of absolutes; Einstein was of the school of relatives. In Einstein’s special theory of relativity, our precious unit of time was not the same on one occasion as in the next. A second’s duration depended on the speed of the observer.

Humanity preferred certainty in culture and life. However, Einstein uncovered that a second is not a second is not a second. The time that it takes for a tick followed by a tock will not be identical for a person moving and another person standing firmly on solid ground. Time is elastic. The thing that was so precious for society wasn’t exactly what we thought. For generations we have worked to make better clocks from the sun’s shadows, to pendulum clocks, to coiled springs, to jiggling gems, and eventually to vibrating atoms in atomic clocks, only to find that what we aimed to measure acts like a rubber band.

Einstein was changing our understanding of time with physics. But just a few years later, in the 1920s, Louis Armstrong altered our experiences with time with music. To many, Armstrong (1901–1971) was a wide-smiling, handkerchief-toting, jazz trumpet player, who crooned “Hello Dolly” and “What a Wonderful World.” But Armstrong was much more than the friendly persona that helped his genius navigate an age of Jim Crow. Armstrong was a time traveler, and his vehicle was jazz.

Armstrong came from nothing. He was the grandson of a slave and born in the toughest neighborhoods in New Orleans. According to his biographer, his “small world was bounded at its four corners by the School, the Church, the Dive and the Prison.” But, just as he overcame those constraints in his life, he overcame the confines of a musical score. For Armstrong, each eighth note did not need to have the same weight or duration on every occasion that an eighth note appeared. He played them a few hundred milliseconds longer, or shorter, or sooner, or later than what was written on a page. He stretched, squeezed, or shifted notes, giving the music a richness, a feeling, and a forward motion.

Armstrong’s attack was a departure from how Western music was usually performed. Western music hinged on accuracy. Marching bands focused on having musicians execute like clockwork. John Philip Sousa, like Sir Isaac Newton, loved precision. Armstrong, like Einstein, found beauty in the lack of it. An eighth note wasn’t played exactly as written but swung, and how the note was executed was decided “in the spur of the moment.”

Western music and jazz have different approaches to time, fashioned from the cultures from which they originate. In Western music, the notes are an ever-continuous progress to a resounding conclusion; the focus is on the future. In jazz, the focus is on the present. Jazz is an African-American dish that combines European, Caribbean, Afro-Hispanic, and African ingredients. African traditions have a different sense of time. The present is to be savored and expanded. In fact, several African languages have words for “past” and “present” but not for “future.” And, it is through this heritage that Armstrong made every note do something, allowing him to stretch the present time with his music.

This African approach to time was transplanted to the New World and took root in the African-American experience. Ralph Ellison captured this black sensibility best in Invisible Man when he wrote about the asynchrony of the black experience, existing out of step—before or after—the pulse of time. A listener to Armstrong’s work can hear and feel that sentiment embodied in the notes. In Armstrong’s Two Deuces (1928), he is continuously behind the beat, shadowing it. The notes are delayed and compressed, which creates a gap between Armstrong and his band. To meet up with them again, Armstrong revs up and then hits the gas.

Armstrong stretches not just the notes, but also the listener’s sense of time. While the songs on a 78 rpm disc are three short minutes, they are so rich with information it causes our brains to believe the recording is longer than it takes to cook ramen noodles.

By playing slower or faster, Armstrong’s audience loses track of clock time and the moment speeds up or slows down as they experience it. Einstein showed us that time is relative for the observer; Armstrong made time relative for the listener. How Armstrong shifts our sense of time has been pondered by poets, penned by critics, and by musicologists. While the research is still in its infancy, Armstrong’s time-shifting abilities might get some support from science.

Timekeeping is ever present in our society. One question that comes to mind is “does timekeeping affect the brain?” The short answers are “yes” and “we don’t know.” We don’t know how the brain was changed as the institution of timekeeping solidified over the span of the nineteenth century, in addition to the loss of segmented sleep.

The field of studying the brain’s temporal response is fairly new and mostly a twenty-first-century pursuit. What we do know, however, is that the brain gets cues about time from its environment.

Neuroscientists such as David Eagleman have done studies to examine the brain’s internal clock. In one experiment, subjects watched a movie with fast-running cheetahs, with their legs coming off the ground, like Trinity in the Matrix. During the movie, a red dot of a fixed duration is flashed, when all four legs are suspended in midair. The same experiment is repeated with a small twist; in the second experiment, the same cheetah movie was played in slow motion, and the same annoying red dot blinked for the same duration as it had before when the cheetah caught air at normal speed.

After the tests were compared, moviegoers believed that the red dot during the slow motion movie was shorter. “Your brain says I need to readjust my sense of time,” said Eagleman. Our brain determines the time based on our knowledge of the laws of physics. Our perception of time is shaped by the events it uses to measure time—the landing of a wildcat’s paw or perhaps the duration of an eighth note.

On a personal level, we have always been aware of the elasticity of time. Good times seem short and bad times seem to last forever. Neuroscientists have shown that in some respects this is not fiction.

The length of our memories is linked to how good or bad the occasions are. What neuroscientists have found is that we don’t perceive time slowing down in the moment, but our recall of the event makes us believe that time has slowed down. To understand what is going on in the brain, imagine that the brain acts like a computer that stores information on a hard drive. When life is boring, the hard drive stores a regular amount of information. When we are scared, however, as during a car accident, the brain’s amygdala—our internal emergency operator—kicks in. Our brains collect finer details like the crumpling of the hood, the breaking off of side-view mirrors, and the changing of the expression on the other driver’s face.

The amount of detail gathered is increased, as if two hard drives are storing the data. “You’re laying down memories on a secondary memory system now, not just one,” said Eagleman. More data gets stored. When the brain recalls the event, it interprets the large amount of information as a longer incident. The shape of the memory becomes the brain’s yardstick of time.

Science shows that the size of a memory and our perception of time are coupled like gear teeth in a bicycle chain. Rich and novel experiences, like the recollections of the summers of our youth, have lots of new information associated with them. During those hot days, we learned how to swim or traveled to new places or mastered riding a bike without training wheels. The days went by slowly with those adventures. Yet, our adult lives have less novelty and newness, and are full of repeated tasks such as commuting or sending email or doing paperwork. The associated information filed for those chores is smaller and there is less new footage for the recall part of the brain to draw upon. Our brain interprets these days filled with boring events as shorter, so summers swiftly speed by.

Despite our desire for better clocks, our measuring stick of time isn’t fixed. We don’t measure time with seconds, like our clocks, but by our experiences. For us, time can slow down or time can fly.

For ages, humans have had an evolving obsession with time. Time helped us understand the world, helped us make appointments, and helped us interact. In our pursuit for precise timepieces, we abandoned nature’s cues, of sunrises and sunsets—and we lost sleep—in hopes of possessing time with great precision in timekeeping. But time is not something that can be possessed. Einstein showed us that time is elastic, and what time it is depends on who you ask. Armstrong demonstrated our brains are faulty clocks, speeding up and slowing down with outward cues. But both Einstein and Armstrong, using science and jazz, showed that we are the time we keep.