Is it possible to eat so much that your stomach explodes?

An ode to the mighty stomach. 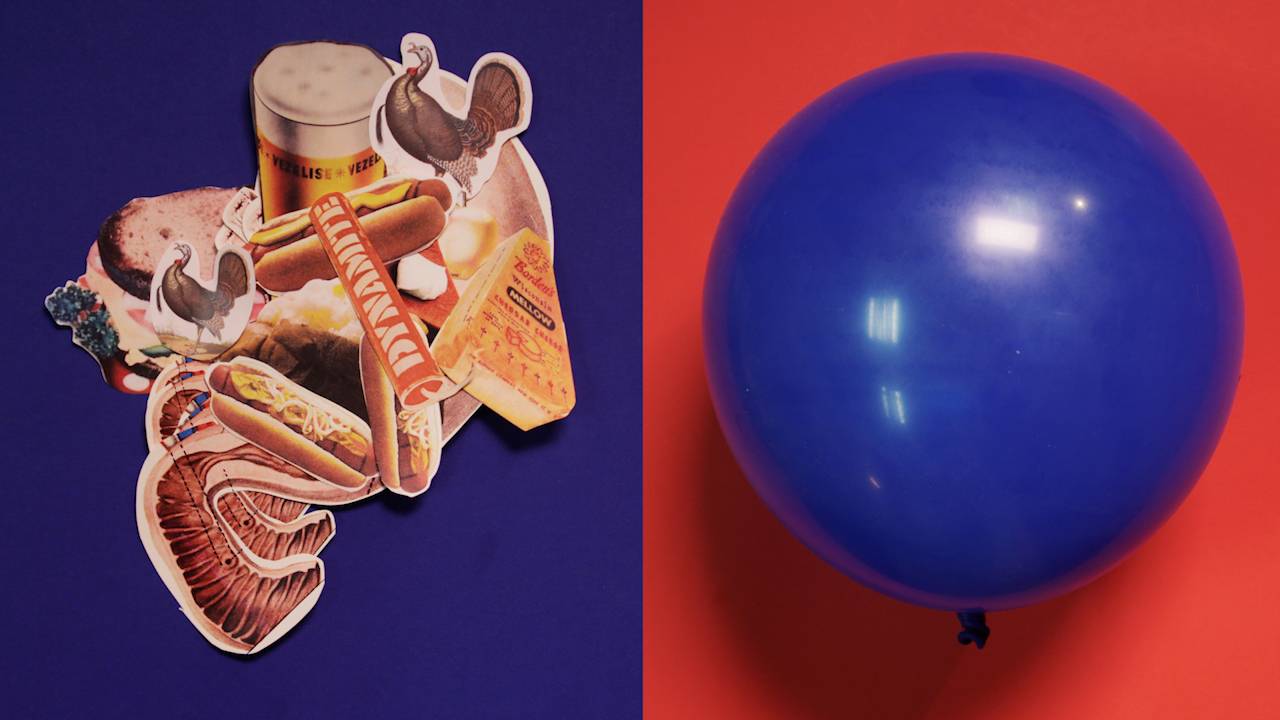 After eating too much, have you ever felt like that dude from Alien whose stomach explodes? Like somewhere in the meat and potatoes, a baby alien snuck in?

We all have. But, baby alien explosion aside, how much can the human stomach hold?

It’s tempting to equate your stomach to a balloon. Both start out small when empty. Both get bigger when stuff goes in them. And, yes, both have a breaking point.

The difference? If you blow up a balloon, pressure and volume have a fixed relationship—as pressure goes up, so does volume. That relationship in the stomach, though, isn’t necessarily so. That’s because the state of the stomach is determined not only by what you put into it. Instead, it’s mostly controlled by nerve inputs (oh, and hormones, but it’s harder to measure their effect on the gut).

A resting, empty stomach can hold six and a half to just over 10 fluid ounces. That’s not even a full can of Coke.

That volume can more than double the instant you start eating—even if you’re just salivating and thinking about eating. A brainstem reflex through the Vagus nerve tells the stomach, “INCOMING!” and as the food goes down the hatch, the stomach relaxes to make room.

Unlike a balloon, the increase in pressure from food or liquid doesn’t cause the stomach to relax and expand. It’s all anticipatory—the result of your brain talking to the nerves in your stomach. This expansion isn’t really at all like a balloon filling with air; it’s more like an unfolding. The stomach is actually covered in folds—or rugae—that unfurl as the organ grows. But these folds have limits. A layer of nerve cells line the walls of your stomach. Once you’ve reached a point of too many sandwiches and too much cheese and beer, those nerves send a signal to your brain saying, “Whoa. Whoa. Whoa. Hey. Hey, whoa. Stop eating.”

So, just how big can the stomach get? Well, keep in mind, the stomach has an exit hatch. And it only takes about 10 to 15 minutes before all that food and drink begins to pass through it. So, a better question might be: “Just how big can the stomach get in 10 to 15 minutes?” Of course, it depends on a lot of factors: age, health, eating habits, hormones … but most importantly, if you listen to what your stomach is telling you.

For most people, that “Ooof, I ate too much,” feeling kicks in after your stomach contains between 16 and 50 fluid ounces. But the stomach can stretch out over time, too, especially if you practice over-eating and ignore your body’s cries for help. For example, the 2017 Nathan’s Hot Dog Eating champ downed 72 hot dogs. That’s about two gallons worth of food in his stomach. Simply put, your brain has the final say in how much you can eat.

But what you’re probably wondering is: “Can a perfectly healthy stomach explode from eating too much?” There have only been six documented cases, ever. So, pretty much: no.

The stomach is an amazing, wondrous thing we take for granted every day. Be honest. How often do you really listen to it? Take a minute to say thanks. Give your belly a nice pat. Because, heck, it’s always looking out for you.