It was a foot long back when most animals were smaller than your pinky. 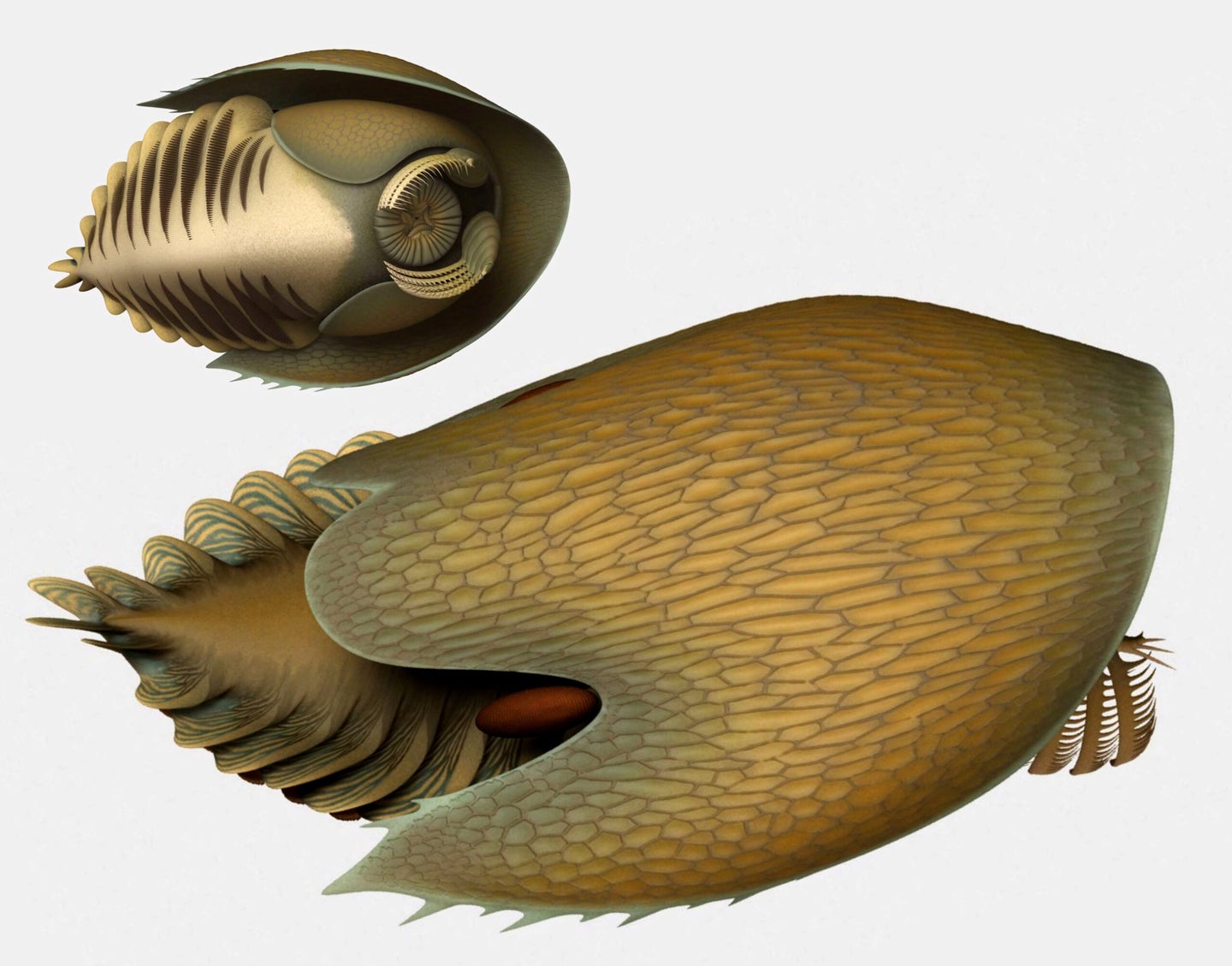 What has claws like rakes, a circular mouth like a slice of pineapple, and is named after the Millennium Falcon? Cambroraster falcatus, that’s what. This newly-discovered aquatic species lived more than 500 million years ago and was a giant of its time.

“In terms of animals that it might look most similar to today, you could think of horseshoe crabs,” says Joseph Moysiuk, a Royal Ontario Museum paleontologist who is the first author of a paper describing the Cambroraster for the first time. Like the horseshoe crab, the animal had a “huge head shield in the front, relatively small body,” he said.

Also like the horseshoe crab, Moysiuk and his colleagues believe the Cambroraster spent a lot of time in the mud, where it must have been a strange sight. The creature was about a foot long in a time when most animals were smaller than your little finger: it was a gigantic predator, trundling around the ocean floor of the Cambrian Period and scooping prey into its mouth with giant claws that had spines on them to filter out dirt but capture even small prey.

When his team found the first fossils of this beast in 2014, says Moysiuk, “we weren’t exactly sure what to make of them, and we just nicknamed them the ‘spaceship.’” After years of exploring the site, he says, “we’ve discovered many more and that allowed us to piece the animal back together.”

When time came to give the animal a formal designation, they stuck with the nickname and gave it a title that references the famous movie spaceship it looks most like. Cambroraster tells us the period it lived in and the way it hunted (raster is Latin for “rake”), but falcatus—that’s pure science fiction.

The fossil was discovered in the Burgess Shale, a Canadian site notable for its preservation of bodies from the “Cambrian explosion,” a time when Earth’s animals diversified and developed into the distant ancestors of the many fauna we have today.

There are a number of competing theories about why the Burgess Shale preserved animals so unusually well, Moysiuk says, but one thing’s certain: mudslides under the ocean or other similar events must have swept over the diverse creatures, cutting their bodies off from air that would otherwise have supported microbes and small animals as they gnawed on soft tissue. Researchers have found creatures in the Burgess Shale so well-preserved, even their stomach contents could be examined for hints at their last meals.

Among the animals that have been found on this site are a number of relatives of the Cambroraster. Collectively, they’re known as Radiodonts, for the arrangement of their teeth around a circular mouth. They were the first large predators, says Moysiuk, and looking at the variety of ways that they hunted shows the sophistication of early animals.

The most famous member of the group, Anomalocaris, was long and skinny and swam around actively hunting prey. Another member of the group is believed to have eaten algae in the upper water column. Looking at the Cambroraster as part of this group shows that related animals in the period had distinct, sophisticated strategies for getting food, Moysiuk says: “They’re not simply predators that are typecast into one role in the ecosystem.”

“Cambroraster falcatus adds to this increasingly complex picture of radiodont diversity by showing that some representatives of this group had evolved a highly modified morphology and ecology,” says Rudy Lerosey-Aubril, an invertebrate paleontologist at Harvard University. “It was clearly adapted to a life as a bottom dweller feeding on the small organisms inhabiting the seafloor—this is a radical departure to the lifestyle of all the other members of the group.”