If the W boson is heavier than expected, then a foundational idea in physics is unfinished. 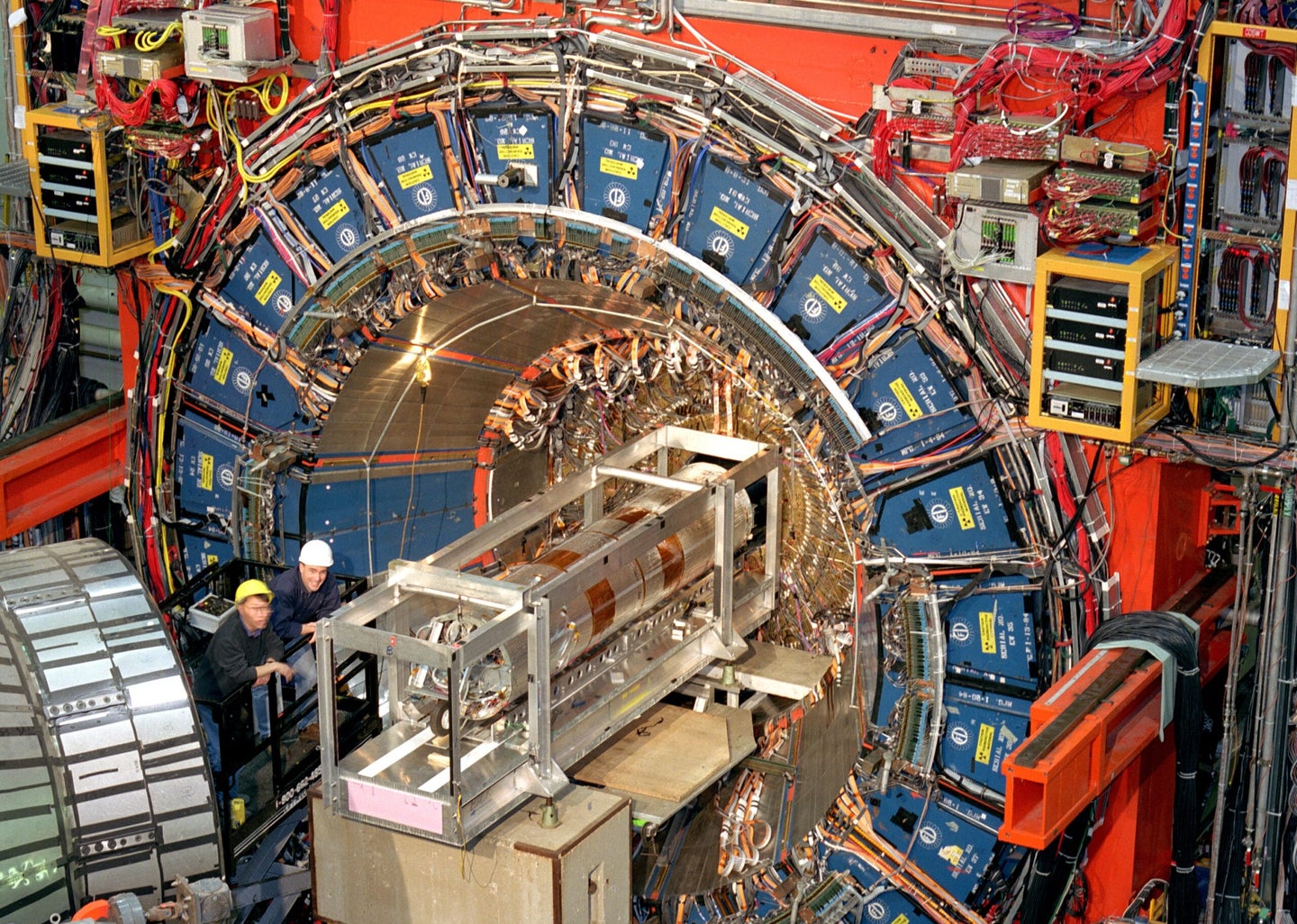 The Collider Detector at Fermilab, one of the two detectors on the Tevatron particle accelerator. Fermilab
SHARE

The sun, a nuclear power plant, and carbon dating all draw their abilities from interactions between particles in the hearts of atoms. Those are, in part, the work of a subatomic particle called the W boson. The W boson is an invisible bearer of the weak nuclear force, the fundamental force of the universe responsible for causing radioactive decay.

It is also the subject of the newest mystery in particle physics. The latest, most precise, and most informed measurement yet of the W boson’s mass, published in Science on April 7, reveals that the particle is heavier than anticipated.

It’s a deviation that can’t easily be explained. If the measurement is confirmed—and that’s a very big if—it could be the strongest evidence yet that particle physics’ long-standing understanding of the universe at the tiniest scales, known as the Standard Model, is unfinished.

“Is nature also hiding yet another particle which would influence this particular quantity?” says Ashutosh Kotwal, a particle physicist at Duke University and a member of the collaboration that published the paper.

The W boson isn’t a newly discovered particle: CERN scientists found it in the early 1980s, and theoreticians had predicted its existence over a decade earlier. Sorting out its mass had been a goal right from the start.

“There’s a long, long history of making this measurement and making the precision better and better, because it’s always been recognised as a very important measurement to make,” says Claudio Campagnari, a particle physicist at the University of California, Santa Barbara, who wasn’t one of the paper’s authors.

In fact, the latest Science paper is the fruit of experiments that are over a decade old. The myriad collaborators who co-authored the paper all worked with data from the Tevatron: a particle accelerator, located at Fermilab in suburban Chicago, whose final collision came in 2011.

As particles whirled around the Fermilab’s rings and smashed into each other, they’d erupt into a glittering high-energy confetti of particles—W bosons included. With more collisions came more data for scientists to poke and prod to piece together the W boson’s mass.

“Our task that we defined for ourselves was: Go measure the facts. And here’s our best effort yet to get at that fact,” says Kotwal.

Those particles spiralled around the accelerator at very near the speed of light, pummeling into each other almost instantaneously. Analysing their collisions, on the other hand, takes years. The Fermilab group had done it before, in 2006 and 2012, taking four and five years, respectively, to sort through previous sets of data.

That’s because measuring the W boson’s mass is a delicate and highly sensitive process that must account for all sorts of minute distractions, from shifts in the magnetic field inside the accelerator to the angles of the detectors that glimpsed the collisions.

“Small mistakes could have a big effect, so it has to be done very carefully, and as far as I can tell, the authors have done an extremely careful job, and that’s why they have been working on it for so many years,” Martijn Mulders, a particle physicist at CERN, in Switzerland, who was not one of the paper authors.

The study authors took over a decade. At the end of it, they found that the W boson was more massive than any of the previous measurements and too massive to align with  for theoretical predictions. It’s almost certainly too big a difference to be written off as a mere statistical accident.

“I don’t think people really expected that a new result would be so far off the prediction,” Campagnari says.

[Related: Physicists close in on the exceedingly short life of the Higgs boson]

“By no means do we believe the Standard Model is intrinsically complete,” says Kotwal.

And if the result holds, “I think we can honestly say it’s probably the biggest problem that the Standard Model has encountered over many years,” says Mulders.

In the coming days and months, particle physicists will pick apart every aspect of the paper in search of an explanation. It’s possible that the Fermilab team made an undiscovered error; it’s also possible that a minor tweak in the theoretical background could explain the discrepancy.

Even if the Fermilab finding is in order, the task still isn’t finished. Physicists would have to independently cross-check the result, verifying it in a completely different experiment. They’d want to know, for instance, why no previous measurement saw W bosons as massive as this one. “For that, the hope would be on CERN experiments,” says Mulders.

In fact, CERN’s Large Hadron Collider (LHC) has already observed more W bosons than Tevatron ever did. Now, scientists working with its data have new motivation to calculate the mass from those observations. They may find aid from new collisions when the LHC becomes fully operational later this year—or, further in the future, when it’s upgraded in 2027.

But suppose that LHC does give proof. Then, the misbehaving W boson could be the fingerprint of something lurking unseen in the quantum shadows. Perhaps it’s a sign of another particle, such as one predicted by a long-elusive theory called supersymmetry, or a hitherto unknown force.

“This is really at the heart of what we think of as the Standard Model, and that would be broken…you have to start questioning everything,” says Mulders.