The Crab Nebula’s electron launcher is so powerful, it almost shouldn’t exist

A new super-facility in the mountains of China helped make the surprising detections. 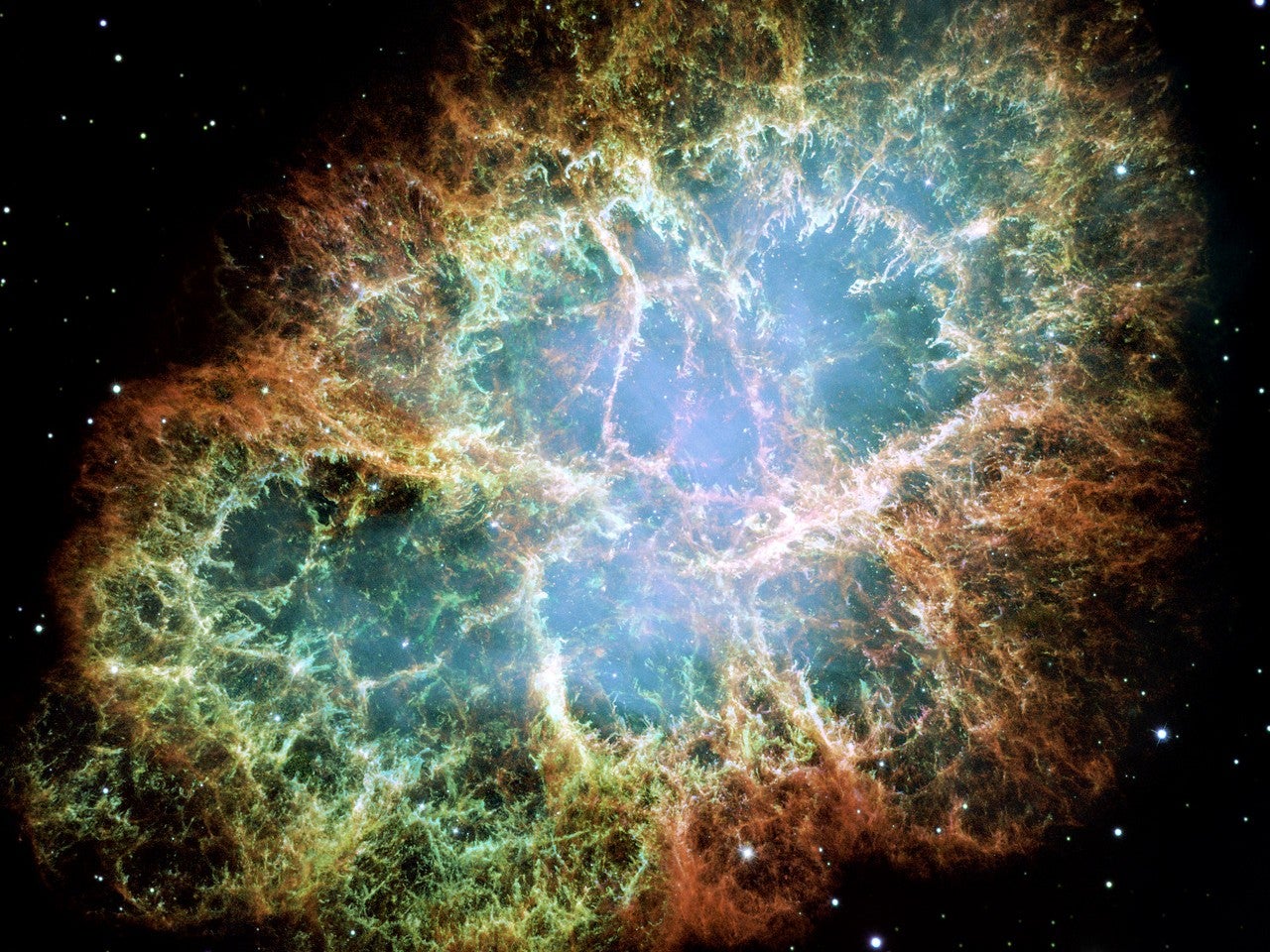 From the 1960s to the 2000s, physicists at the Stanford Linear Accelerator Center (SLAC) hurled electrons into related particles with as much energy as they could muster. The researchers peered inside subatomic particles, discovered two fundamental particles, and won three Nobel Prizes for their efforts. The two-mile long accelerator infused electrons with energy (in the peculiar units of particle physics) reaching tens of billions of “electronvolts,” a feat of engineering that stands unrivaled.

Now astrophysicists have used another extreme machine to discover a natural electron bazooka that makes SLAC look like a pea shooter.

Over the last year or so, a colossal facility high in the mountains of southwest China picked up two showers of particles each produced by a single high-energy beam of light—a gamma ray—slamming into the upper atmosphere. Both gamma rays appear to have originated from the Crab Nebula, a sign that the famous supernova remnant harbors the most powerful electron accelerator yet identified. The gamma rays carried a level of energy—millions of billions of electron volts, or a “petaelectronvolt (PeV)”—that challenges what theorists thought possible.

[Related: This ‘kilonova’ shines so bright, it defies the odds]

“We were dreaming for decades of detecting a 0.1 petaelectronvolt event,” says Felix Aharonian, an astrophysicist at the Dublin Institute for Advanced Studies and member of the collaboration that made the detection. “No one expected that you would detect 1 PeV gamma rays.”

When natural accelerators like supernovas fire out electrons, the charged particles follow looping and chaotic paths through the universe’s many magnetic fields in a way that hides where they came from. But when one such particle plows into omnipresent microwaves soon after being launched, the collision releases a gamma ray flash that flies straight. Looking for the particle showers produced by these intergalactic emissaries is one mission of the Large High Altitude Air Shower Observatory (LHAASO).

LHASSO sits nearly three miles above sea level on Haizi Mountain in China’s Sichuan province. There it looks for cascades of thousands of electrons and other particles, debris unleashed by cosmic rays or gamma rays crashing into Earth’s atmosphere. The facility features multiple types of detectors spanning more than a square kilometer of combined area both above and below ground, making it ten times larger than the previous leading instrument.

The more than 5,000 detectors above ground watch for the ensemble of particles raining down after both cosmic ray strikes and gamma ray strikes, while the more than 1,000 underground detectors sense only muons. These hefty electron cousins appear often during cosmic ray showers (but less frequently during gamma ray showers), which lets researchers eliminate them and focus only on gamma ray hits with a precision no other Earth-based instrument can match.

“People call it a facility from the future operating now,” Aharonian says.

Until recently, LHAASO has been under construction. And one of the first things astronomers often do while tuning up a new telescope is to observe the Crab Nebula—the remnants of a supernova spotted by Chinese astronomers in 1054, and one of the most thoroughly-studied objects in the sky. “It’s the superstar in the sky,” Aharonian says. “Sometimes we call it the standard candle.”

The Crab Nebula passes above LHAASO for about seven hours each day, so as the collaboration was ramping up operations, scientists working at the facility spent thousands of hours watching it. All seemed as it should—except for two surprises.

Last year on January 11, nearly 5,000 incoming particles lit up around 400 surface detectors, with just a few muons making it to the sensors underground—what you might expect to cascade down from a 0.9 PeV gamma ray hitting the atmosphere.

This year, on January 4, the Crab Nebula flared again, this time with an even mightier gamma ray registering about 1.1 PeV. At the time, the photon was the highest energy light ray ever recorded on Earth (LHAASO has since recorded a 1.4 PeV gamma ray from an entirely different type of source). The collaboration described their findings yesterday in the journal Science.

Records aside, what really intrigues the researchers isn’t the light rays themselves, as much as the speedy electrons that initially sent the flash of light hurdling straight toward Earth—and the monstrous cosmic hardware capable of accelerating the electrons to such unheard-of energies.

“1 PeV is a real surprise,” Aharonian says. “We knew that Crab is a super-efficient machine for converting energy and for accelerating particles. But now we see even ‘super’ is maybe a bit modest.”

So how is the Crab Nebula spitting out such zippy electrons? Astrophysicists have a rough idea.

At the center of the cloud lies a pulsar—an 18-mile-wide neutron star that whirls around wildly about 30 times each second. From this spinning stellar husk, a “wind” of electrons and their antimatter partners blows outwards at a respectable percentage of the speed of light. Eventually, this electron-gale slams into the surrounding dust cloud, sending out a shockwave of electrons and other particles (some of which would emit gamma ray photons of the sort that LHAASO picked up).

The challenge, according to Aharonian, is to understand the last stage: how the wind slings electrons with enough oomph to make a 1 PeV gamma ray. A powerful local magnetic field must be involved to get the electrons hustling, but more powerful magnetic fields also cause electrons to release more particles as they pass through (causing a sort of drag process that engineers have struggled to minimize while building Earthbound accelerators like SLAC).

Nevertheless, the Crab pulsar somehow managed to hand almost every smidgen of energy in its electron wind off to the two electrons that sent gamma rays toward LHAASO last year. Based on LHASSO’s observations, the pulsar likely fires off enough PeV electrons each second that these particles alone carry away as much energy as our entire sun radiates in all wavelengths. Astrophysicists are stumped as to how so much energy gets into the zippiest electrons.

“It’s at the margin of reality,” Aharonian says. “It cannot be simple shock acceleration. It should be something special.”

LHAASO spotted these two ultra-high-energy light rays (along with a bunch of only slightly less peppy photons) during its construction, while working at roughly half of its potential. Now that the facility has reached full sensitivity, the collaboration looks forward to at least a decade of collecting more details about what the Crab Nebula is capable of.

“In a few years we’ll know a lot, and I think surprises could come,” Aharonian says.

Correction July 13, 2021: A previous version of this article misstated how accelerated electrons produce gamma rays. They must travel through microwaves, not a gas cloud.