Reconstructing The Oklahoma Tornado From Start To Finish, In Videos 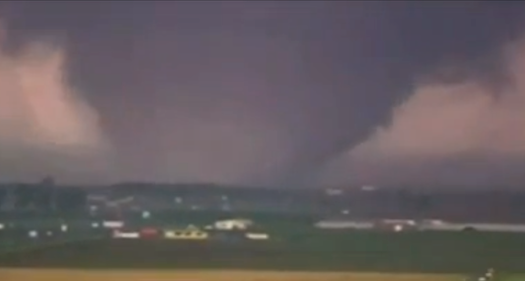 The devastation wrought by the mile-wide, EF-4 tornado that ripped through Moore, Okla., and south Oklahoma City yesterday is really difficult to put into words. You could start with the huge path of destruction, more than a mile wide at places, that wiped entire neighborhoods clean off the map like they were never even there. It’s more difficult when you get to the two elementary schools–concrete and cinder block buildings that gave way to the truly devastating force of this storm.

It’s tough to describe and easier to show. And given the camera-fication of everything these days, there’s plenty of footage floating around the web today, enough that one can pretty much reconstruct this twister–which was on the ground for 40 minutes with winds up to 200 miles per hour–from start to finish. Which is exactly what we’ve done below.

1. In Newcastle, Okla., (just southwest of Moore and due west of Norman), the funnel drops from the sky and starts picking up steam (and debris).

2. By the time this thing reaches Moore, it’s a monster. Even seasoned storm chasers can’t believe what they are seeing.

3. It doesn’t get better. The video below begins with footage shot near South Moore High School but culminates with scenes shot from a devastated neighborhood just minutes after the storm more or less flattened it.

4. Another perspective captured by a storm chaser from the east side of Moore offers a clear view of the massive, swirling debris field gathered by the funnel. At this point the tornado has traveled roughly three-quarters of its total journey and is tearing through the heart of Moore.

5. Just west of Lake Stanley Draper the tornado stops moving and begins to rope out and dissipate.

6. And of course there’s the timelapse, which quickly conveys–in a few brief, sped-up clips–just how destructive this storm was as it gathered steam and then slammed into the sprawling suburbia of Moore.