Blueprint: A Kite That Captures Energy

Ben Franklin would be proud. 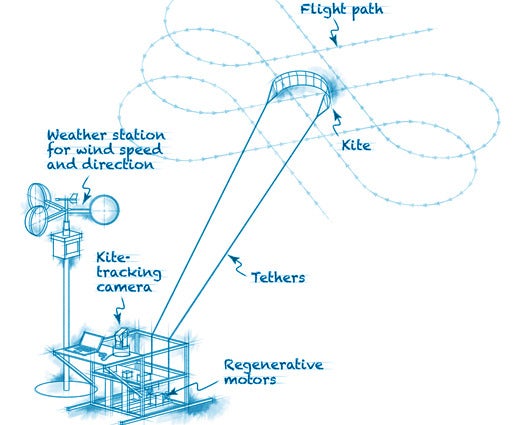 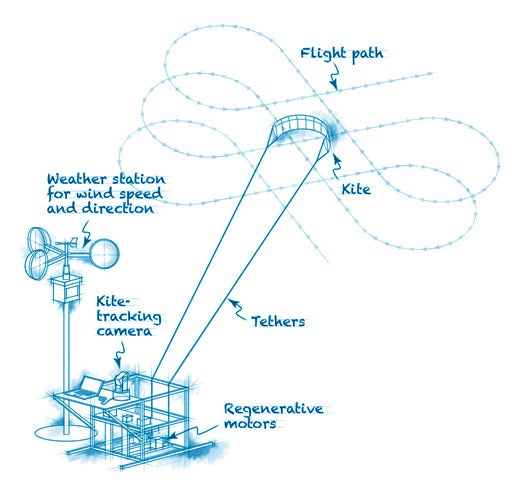 “You know how a kite can pull its string from your hands? Airborne wind-energy systems like ours work on the same principle—the pull of the kite turns a generator and creates electricity. Kites are promising because they can go higher than a regular wind turbine, to altitudes where wind speeds are faster and more consistent.

In our experimental system, we use an off-the-shelf kite about 20 square feet in area. We’ve flown it about 300 feet. As the wind blows the kite higher, it unspools the kite’s tethers, turning the motors and generating power. The motors use regenerative braking (the same kind of system that recaptures braking energy in a hybrid car) to control the length of the tethers and steer the kite in a precise figure-eight pattern that keeps it perpendicular to the wind. This maximizes the wind’s pull. The kite does dozens of figure eights over the course of a few minutes before it reaches the end of its tethers. Then the motors quickly reel it in and start over again.

Our kite system is designed to fly up to 2,000 feet high and as fast as 100 mph. It can produce about two kilowatts—enough to power one household, if you could fly the kite continuously. Start-up companies and universities are making their own kite systems in the 30- to 50-kilowatt range. But for a kite to fly for months with no human interaction, you need a control system that can handle chaotic wind conditions. That’s why we’re working to improve the software. A digital camera on the ground provides real-time information on the kite’s location, direction, and speed. Our control algorithm takes this information, plus data from a wind-speed monitor, a weather vane, and sensors that measure tether forces and spool angles, and tells the motors how to adjust the kite’s path for the most efficiency. There are streams of energy right above our heads; kites may be a way to bring that power down to Earth.” _—David North, an aerospace engineer at NASA Langley Research Center. As told to Flora Lichtman._