A new type of wind turbine harvests not only electricity from the wind, but clean water from the air, by... 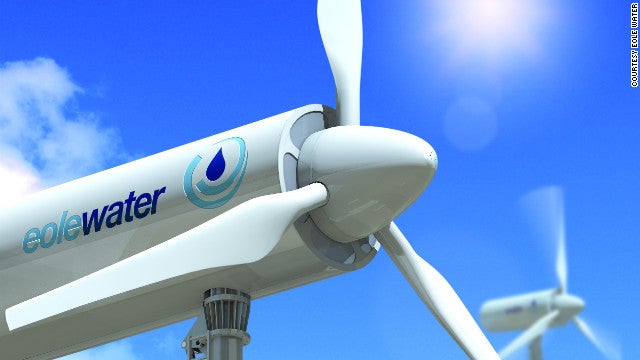 A new type of wind turbine harvests not only electricity from the wind, but clean water from the air, by condensing humidity from even the driest climes. One prototype turbine is apparently collecting 16.3 gallons of water an hour from the desert air over Abu Dhabi, according to the company that builds it.

French company Eole Water produces several water-harvesting technologies, including the WMS1000 wind turbine, a harvester powered by a 30-kilowatt solar panel and a water condenser that can connect to an existing power grid. The company’s founder, Marc Parent, started collecting water from an air conditioner while he lived in the Caribbean, and later conceived the idea to generate water from atmospheric moisture.

The turbine works like a typical wind turbine, with three upwind blades spinning to generate electricity. Then in a separate process, air is sucked into the turbine’s nose and sent through a cooling compressor, which extracts moisture from the air. Water droplets drip down stainless steel pipes inside the turbine shaft and are collected at the base, which houses a filtration and purification system. The system is powered by the wind turbine.

The company claims one turbine can produce up to 1,000 liters of water every day, depending on the humidity and wind conditions. The company says it could help remote communities in need of clean drinking water, especially in Indonesia and countries in Africa. For now, one turbine costs $790,000, but the cost could come down if the company starts building lots of them, according to a spokesman who spoke to CNN.

The prototype in Abu Dhabi has been in operation since October, the company says.