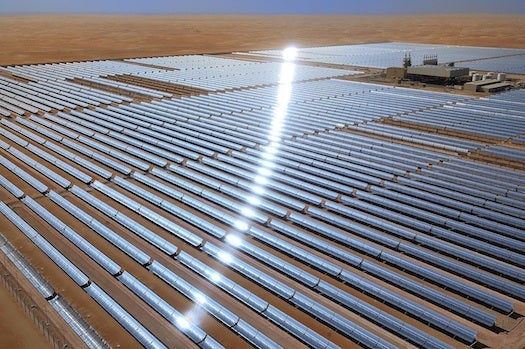 One of the world’s largest solar power plants opened this weekend in the oil-rich city of Abu Dhabi.

The 100-megawatt plant, called Shams 1, is a first step in a plan to make seven percent of Abu Dhabi’s energy resources renewable, Sultan Ahmed Al Jaber, head of the Abu Dhabi Future Energy Company, said during a news conference. Abu Dhabi is part of the United Arab Emirates, which are famed for their oil wealth. The emirates rank 13th in the world for per capita GDP, a standing driven mostly by their oil exports.

The new plant includes a huge field of parabolic mirrors located in the desert about 74 miles (120 kilometers) south of Abu Dhabi. Shams 1 will serve 20,000 homes and cost an estimated $600 million to build, the BBC reported. Similar Shams 2 and Shams 3 plants are in the works, Clean Technica reported.

Shams 1 is a concentrated solar energy plant, which means its technology is a little different from the flat, black photovoltaic panels you might have seen on people’s roofs. Shams 1’s uses mirrors to concentrate the sun’s energy to heat a fluid, which produces steam to turn turbines to make electricity.

Shams 1 isn’t a perfectly efficient solution, however. The plant’s process still requires some natural gas to “superheat” the fluid, Clean Technica reported. It also requires uses some energy in the form of brusher trucks that clean the mirrors of sand. Even in the middle of the desert, it’s impossible to make a solar power station totally efficient.