Archaeologists argue that drought caused by climate variation played a major role in the decline and fall of Mayan civilization. Debilitating drought may have been a major factor in the fractious politics that ended the Maya civilization, according to archaeologists. Maya culture thrived in wet seasons and fell apart when the rains ceased. “It’s an example of a sophisticated civilization failing to adapt successfully to climate change,” said James Baldini, a professor at Durham University in the UK.

This claim is the result of new 2,000-year-old climate records from caves, a “war index” consisting of certain keywords in Mayan rock inscriptions, and archaeological data.

The decline and fall of the Maya is still a great mystery, and the role of climate change–specifically, drought–has been controversial in part because of the lack of data. To remedy this, Baldini and researchers from the U.S., Switzerland, Germany and Belize analyzed stalagmites from a Belizan cave called Yok Balum, which is located a little less than a mile from the Mayan site of Uxbenká. The icicle-like cave growths serve a little like tree rings, containing a record of past climates that can be cross-checked by uranium-thorium dating. Like radiocarbon dating, this method can determine the age of non-organic calcium carbonate material–in this case, cave limestone.

A 22-inch stalagmite from Yok Balum yielded measurements of oxygen isotopes, the research team explains in their paper. These isotopes can be used to reflect rainfall at any given time, falling above the cave and seeping in to form the stalagmite. 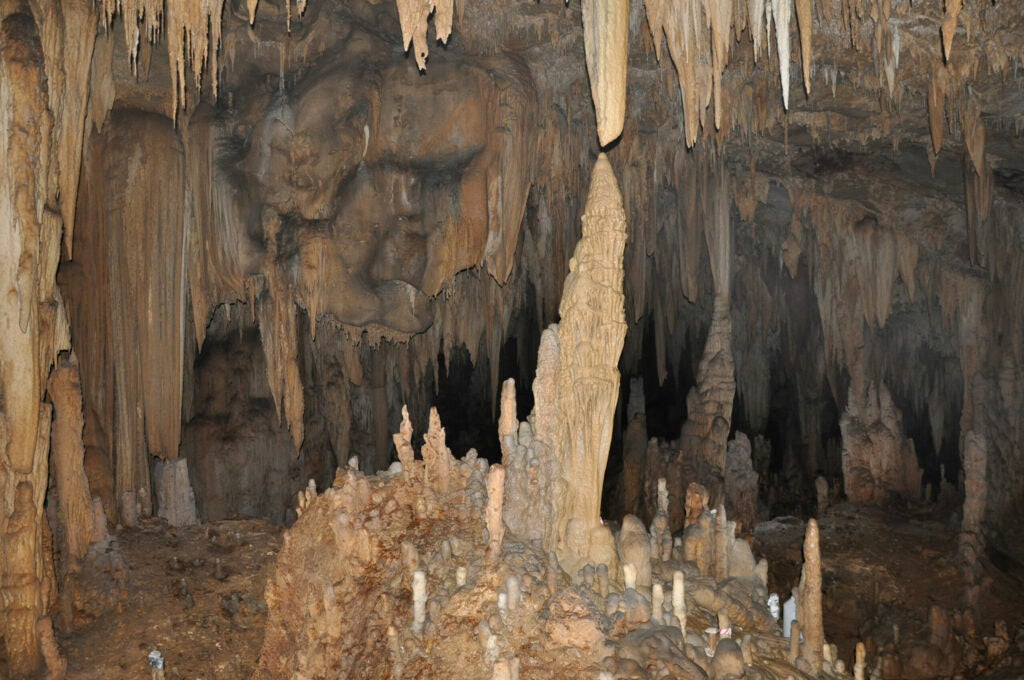 The Yok Balum cave in Belize, where researchers collected rainfall samples from stalagmites.

By analyzing this spiky protuberance, the team was able to identify broad cycles of wet and dry periods, as well an abrupt drought, in the era of Classic Maya (300 to 1000 C.E.). They argue that growth and expansion of Maya civilization correlates strongly with a wet period spanning several hundred years, archaeologist Douglas Kennett said in a podcast with the journal Science, which publishes the paper today.

“The decline of the Maya actually appeared to correlate with a downturn generally in climate, and climate drying, starting at around AD 660,” he said. “We see an increase in warfare at this time, which we argue in the paper is linked to troubles in their economic system related to decreased productivity of their agricultural system.”

The lack of moisture led to a lack of crops, which led to instability. Between C.E. 800-900, many cities fell. The team analyzed historical records inscribed on well-dated stone monuments to chronicle this collapse.

In this case, climate change is a natural cycle driven by something called the Intertropical Convergence Zone and by the familiar El Niño cycle. In El Niño years, the intertropical zone moves over the Pacific, and moisture in the Maya region decreases, the researchers say. Rainfall amounts impact agricultural productivity for good or ill.

“Many of the best-recorded ruling Maya lineages were founded around 440 to 500 C.E. during [an] interval of anomalously high rainfall,” the authors say. And the opposite is also true. A drying trend started around 160 years later, in 660 C.E., with sporadic drought cycles lasting several decades. The early stages of this dry trend correspond with an increase in warfare among Mayan cities, the authors claim. Drought triggered balkanization and isolation, increased warfare, and generally destabilized Maya society, they say.

Drought is still just one factor, however. Archaeologists and anthropologists can now start studying its impact on the more complex human elements of the fall, Kennett said.

“It clearly played out over several hundred years, and climate plays one role in that decline, we argue,” he said. “We’re looking at climate as one part of a very complex system, and this is one of the foundational data sets for looking at these complex interactions in a much more detailed fashion.”

The next stage is developing more sophisticated models that can reflect how climate influences society, he said.