The most daring aerospace innovations of 2020

They’re the Best of What’s New 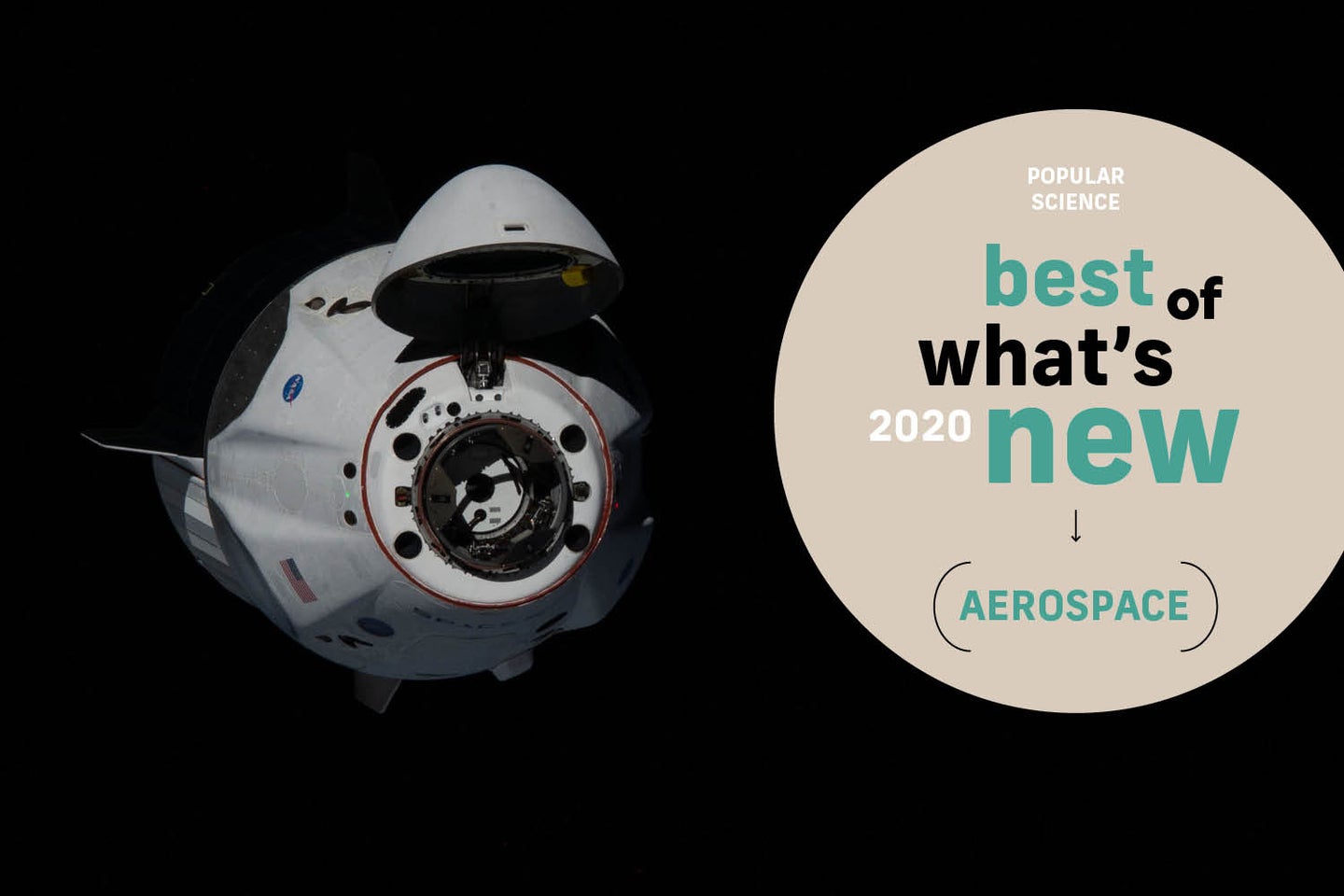 The year's most important developments in the world of aerospace. NASA
SHARE

The COVID-19 pandemic has been terrible for the commercial aviation industry, but that hasn’t stopped aerospace innovation from cruising along over the past year. The list below highlights a giant airliner with folding wingtips, a fighter-jet drone that uses artificial intelligence, and even a nuclear-powered rover that’s zipping toward Mars at this very moment. And did we mention the US managed to launch astronauts from its home turf for the first time since 2011? Read on.

A rover to search for signs of life on Mars

NASA has spent decades studying the Red Planet’s geology and chemistry, and now with the Mars 2020 mission it’s tackling the big biological question head on: Did the planet ever host life? On July 30, NASA launched a rocket with the one-ton nuclear-powered Perseverance rover on board. After it lands in February 2021, it will be the first rover designed specifically to look for direct evidence of past or present organisms. The machine may closely resemble its predecessor, Curiosity, but it brings new abilities to Martian exploration. The SHERLOC spectrometer’s powerful laser will scan rocks for glints of biological molecules as scant as one part in a million. Researchers will combine that info with crisp images and other data from the PIXL imaging system to look for the holy grail—clumps of molecules, such as amino acids or lipids, that indicate life (at least as we know it). Such evidence could become hard proof if we ever got pieces of Mars back to Earth for further study. Perseverance will help there too, as it’s the first space robot designed to store samples for recovery during a future mission.

Bringing human spaceflight back to our turf

When astronauts Doug Hurley and Bob Behnken blasted off from Cape Canaveral on May 30 during the Crew Dragon Demo-2 mission, it marked a historic lift-off—the first to launch humans into space from US soil in nine years, and the debut of just the fifth-ever US crewed spacecraft. Hurley and Behnken were flying aboard the Crew Dragon—SpaceX’s 21st century spaceflight system, replete with expansive touch screens and the ability to reach the ISS with no input from its pilots. And, for the first time, NASA handed over mission control to a private company. While Houston operators kept tabs, SpaceX employees in Hawthorne, California ran the show. As the astronauts splashed down on August 2, a SpaceX controller foreshadowed a future with commercial spaceflight when he said: “Welcome back to Planet Earth, and thanks for flying SpaceX.”

Staring directly into the sun

In February, the European Space Agency stuffed a solar laboratory into a rocket and flung it toward the sun. Where NASA’s Parker Solar Probe eschews sun-facing cameras and other bulky, delicate equipment so that it can swing even closer to our nearest star, the ESA orbiter strikes a compromise: It stays farther out, but bristles with instruments. As the first probe to boast cameras that stare directly at the sun up close, the craft aims to sense local breezes in the solar wind and trace them back to the surface eruptions that might cause them. The machine’s ten instruments hunker down behind a state-of-the-art heatshield that will help them brave the blistering rays.

Fuel is the lifeblood of a satellite: Its end spells a mission’s finale. Or at least it did, until the first Mission Extension Vehicle (MEV-1) brought an ailing geostationary satellite back from the brink of death. In February, the MEV-1 inched toward the Intelsat 901 communications satellite as they both whizzed through space at about 7,000 mph. A trio of sensors, including a LIDAR distance gauge, acted as MEV-1′s eyes as it caught the Intelsat 901 by the engine and clamped on with millimeter precision. With the MEV-1′s electric thruster replacing the aging satellite’s spent chemical propulsion, the hardware can add another five years to the vehicle’s lifespan. The system’s design is able to dock with about 80% of the 400-plus satellites in geosynchronous orbit, and a second mission, MEV-2, launched on August 15. After finishing a years-long assignment with one zombie orbiter, the vehicles can detach and rescue new targets.

The EDAT demonstrator by Bell

A radical new spin on helicopters

On a helicopter, the big rotor up top does the heavy lifting, while the tail rotor functions as an anti-torque device. If that tail rotor (which is mechanically connected internally to the main rotor via physical components, like drive shafts and gear boxes) didn’t exist, the chopper would spin around in circles. But Bell’s fascinating Electrically Distributed Anti-Torque (EDAT) demonstrator functions differently: Instead of a mechanical connection, an electrical system does the work. Generators attached to the main rotor’s gearbox produce juice that then runs four shrouded fans in the tail. The result is a whirlybird that’s quieter than usual, but also potentially safer. When parked on the ground, the craft’s main rotor can spin while the tail fans are switched off, eliminating a deadly hazard for ground personnel. That’s impossible to do on a regular chopper.

Rewind two decades or so, and civilians with access to lots of money had a way to travel at supersonic speeds via the Concorde. But since that iconic aircraft stopped flying in 2003, faster-than-sound trekking has been off limits to all but those in the military. In early October, though, a startup called Boom unveiled the XB-1, a craft developed as a stepping stone toward making supersonic journeys—like traveling from New York to London in 3.5 hours—a reality. The 71-foot long XB-1 hasn’t flown yet and is much smaller than the planned passenger version of the future, called Overture. But elements of the prototype plane, like the use of a camera system to help the pilot see the runway when landing, should help inform Boom’s journey towards making a new Concorde-type jet in the future. The XB-1 is expected to fly for the first time in 2021.

Imagine the terror a passenger on a small plane would feel if a pilot became incapacitated from a medical emergency such as a heart attack. Now, on some general aviation aircraft, those travelers would have a new option: They could simply push a button to land the plane. Autoland takes over from there—choosing an airport, physically flying the plane, and lowering the landing gear at the right time—to bring the vehicle down safely. It broadcasts the situation over the radio, and can even kick in automatically if the pilot doesn’t interact with the aircraft in a set amount of time. It’s now certified on three different types of planes, all of them small passenger aircraft: the Piper M600, Daher TBM 940, and Cirrus Vision Jet. Garmin says it’s completed more than 1,000 test landings with Autoland, but it hasn’t yet been used in a real emergency—although the company estimates the system could prevent roughly three crashes per year in the US.

Private flight you (yes, you) can afford

We’re all too familiar with sitting elbow-to-elbow with neighbors on a crowded plane. The team behind the Celera 500L prototype, which holds just six passengers, hopes to bring the costs and travel times of private flight down to commercial levels so even regular folks can cruise on smaller, more comfortable crafts. The vehicle’s blimpy shape and rear propeller are designed to create an aerodynamic phenomenon called laminar flow, in which the air travels in smooth layers over the craft. Since the plane should thus be much more fuel-efficient than its competition—perhaps four or more times so—ticket prices should stay low; lower planned maintenance costs and a cheaper sticker price in the first place should also help with that goal. That way, we can fly in private comfort out of smaller airports.

The Loyal Wingman by Boeing

An AI companion in the air

This 38-foot long aircraft looks like a fighter jet, and is designed to fly like one—but there’s no place on it for a pilot. The uncrewed vessel is meant to act as a sort of robotic team member, flying alongside or ahead of a traditional aircraft. Artificial intelligence will help these machines—part of a project called the Airpower Teaming System—carry out that complex task. The concept behind the flying bots is that they could do things such as venture forward into dangerous territory, or help protect the planes they accompany. Each jet features a totally removable nose, allowing teams on the ground to quickly swap out the wee craft’s payload depending on what the mission demands.

Folding wingtips on the 777X by Boeing

Sneaking in some extra wingspan

This XXL commercial aircraft made its first flight back in January. What makes it unique is a trick at the end of its wings: The tips can fold up and down. When they’re tucked up, the wingspan is just shy of 213 feet—narrow enough to fit within a gate’s allocated space. But before takeoff, they deploy downwards to create a span that’s about 235 feet long. The purpose of all this folding action? A long wing is more efficient in flight, but space is at a premium when it comes to airport parking. The huge craft also sports the largest jet engines around, the GE9X, each of which features a fan that’s 11 feet in diameter.

The COVID-19 pandemic has made flying more fraught for everyone. But armchair aviators who have a hankering to climb into a cockpit received a new outlet this year in the form of a jumbo-jet-sized new version of Microsoft Flight Simulator—the first since 2006. Artificial intelligence helped create some of the game’s gorgeous graphics, like the shapes of buildings, and a new method of simulating flight made the plane’s motion through space more lifelike than ever. Players can now take a seat in the cockpit of craft like a Cessna 172 or even a Boeing Dreamliner—no flight lessons needed.

Transferring fuel from a tanker to an aircraft like a fighter jet in midair is a high-stakes operation. Both planes are whizzing through the sky, and thousands of pounds of fuel flow between them. With one typical method, a human operator lowers a long boom from the tanker to the top of the receiving plane. But Airbus has devised a way to automate that risky business at the push of a button. The computer system utilizes cameras and other sensors beneath the tanker to monitor the position of the receiving plane, and then moves the boom into position to get the kerosene flowing. The result is greater efficiency and safety, Airbus says, reducing human workload.