Sorry, you can’t eat these popular foods on the International Space Station

Fizzy drinks, salt and pepper, and alcohol are some of the culinary items that don't make the safety cut for space travel. 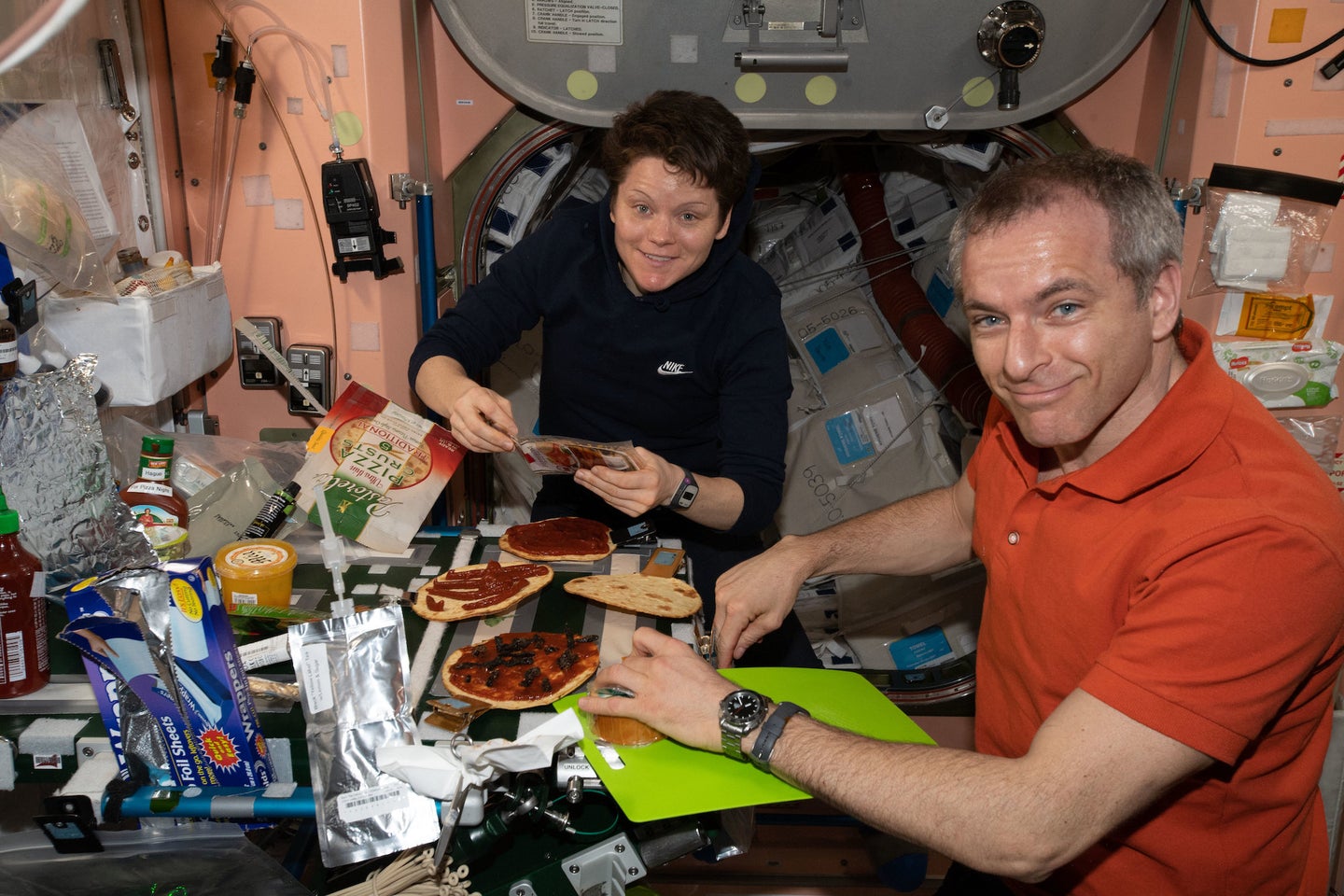 Have you heard the joke about the astronaut who got food poisoning? Probably not, and for good reason. It’s because such an event has honestly never happened. To date, no astronaut has ever gotten a food-borne illness in space.

“At NASA, we actually have a higher microbiological standard compared to most companies in the general food industry,” says Xulei Wu, a NASA food scientist and food system manager for the International Space Station. In other words, NASA is a stickler about food safety and storage when it comes to space travel.

To reduce the risk of potential sickness, all food products sent to the ISS must undergo rigorous testing. If a food fails the test, those products are immediately thrown out of the running to become freeze-dried astronaut chow. In contrast, a successful dish has to be both safe to eat, and able to provide a lot of nutrition in one serving.

What’s inside an astronaut’s pantry?

However an astronaut’s diet, while certainly strict, isn’t necessarily a bland one.

On any given day, the International Space Station’s pantry-style dining setup has about 200 dishes an astronaut can choose to eat. This freeze-dried buffet accounts for about 70-75 percent of all the crew’s meals. The rest mostly comes from crew-specific menu food—each astronaut is able to make a kind of culinary wishlist, and request certain foods or drinks they want for the duration of their mission.

Even so, many of these fan favorites may not end up making it to the station in time for an astronaut’s stay, and in some cases, at all. From production all the way to transport, it takes quite a long time for food to get approved and then loaded onto a rocket. Even then, once food makes it into orbit, it could take years before it’s consumed by a peckish astronaut who has a craving for their favorite snack.

[Related: Why space lettuce could be the pharmacy astronauts need]

“We don’t have a cargo vehicle to go there every week to send what they want,” says Wu. “Therefore we have to pre-pack their food and load all the food on cargo vehicles before the crew member even launches.”

As space travel becomes even less of a distant reality, NASA eventually wants to work on improving better processing and packaging technologies to make food last as long as possible.

But transportation aside, there are some foods that are currently banned on the space station—and the reasons why may surprise you.

In our homes, these small scraps are often categorized as an annoyance and mess rather than a real problem. But once you’ve left the safety of Earth’s orbit, the petite particles are considered an occupational hazard.

Crumbs are labeled Foreign Object Debris (FOD), or any object that could cause damage to a craft or system. NASA says that these wayward particles could interfere with mission equipment, be inhaled by crew members and in some cases, float into their eyes.

But luckily, this doesn’t mean that astronauts must go without crumbly foods (which is a lot of food) completely. For example, instead of typical bread products, like rolls or biscuits, that easily break apart and crumble, NASA’s food lab says it’s been sending alternative options to the station.

“The tortilla is super popular. It’s not really a leavened bread, but it kind of serves a [similar] purpose,” says Wu. “It’s versatile, but tortillas don’t crumble like most bread.”

There are other foods that can create big crumbly messes too, including ice cream. In microgravity, these dehydrated treats could become so brittle that they crack apart entirely, and send flavored flakes of these icy treats flying everywhere.

Collaborations between several groups and launch facilities have been developing other types of frozen treats like popsicles, which NASA hopes to send to the ISS in the future, says Wu.

Sorry, there’s no conventional seasoning out in space. If you were to shake salt and pepper out in space, the grains would end up suspended in the air and be a similar hazard to floating crumbs. To add a little more flavor to foods, NASA scientists have come up with a clever alternative: liquid spice. Instead of using salt-and-pepper shakers, astronauts pour on pre-made salt and pepper solutions like they would salad dressing or sauces. NASA’s food lab dissolves the salt in water and the pepper in oil before sending off the liquid spice to space.

Fizzy beverages are probably the most dangerous of banned space foods, purely because the consequences of drinking them still aren’t fully understood.

Carbonated drinks, by definition, contain dissolved carbon dioxide. To get rid of this carbon dioxide, people typically end up releasing the gas with a burp, but according to NASA, carbonation and soda don’t separate in microgravity. Without gravity to push these bubbles out, after swallowing, they could become trapped in an astronaut’s digestive system and cause adverse health effects.

“In the microgravity environment, it could be a wet burp because the gas and the liquid don’t tend to separate automatically,” she says. “It will be a discomfort for sure.”

However, it’s difficult to pin down the exact health consequences of bubbly drinks because NASA hasn’t been able to safely conduct tests on astronauts to see how carbonation in microgravity could potentially harm the crew.

After a long day or for celebratory occasions, astronauts can’t whip up a cocktail or pop a bottle of champagne. But alcohol isn’t just banned to ensure ISS crew members stay focused and alert. One of the main reasons libations are not allowed on board is because it could potentially damage the Environmental Control and Life Support System, or ECLSS.

One of ECLSS’ many responsibilities is to provide clean air and clean water to the station by recycling urine, cabin condensation, and other waste products. A key ingredient in alcohol is ethanol, a compound which could also become extremely volatile in space. Because the recycled water has strict purity standards, anything interfering with an astronaut’s natural digestive processes, including extra chemical contaminants like ethanol breathed out by crew, could put the entire life system in jeopardy.

“That system is very sensitive to ethanol,” says Wu. “Therefore, if alcohol is being sent up [and consumed], that will evaporate and interfere with the system’s [ability] to regenerate air and water.”

But historically, while some astronauts certainly have no problem going without a drink for a few months, there have been some cases of crew members sneaking their own spirits aboard.

Correction (March 30, 2022): This story has been updated to correct a typo in the acronym for the Environmental Control and Life Support System (ECLSS).