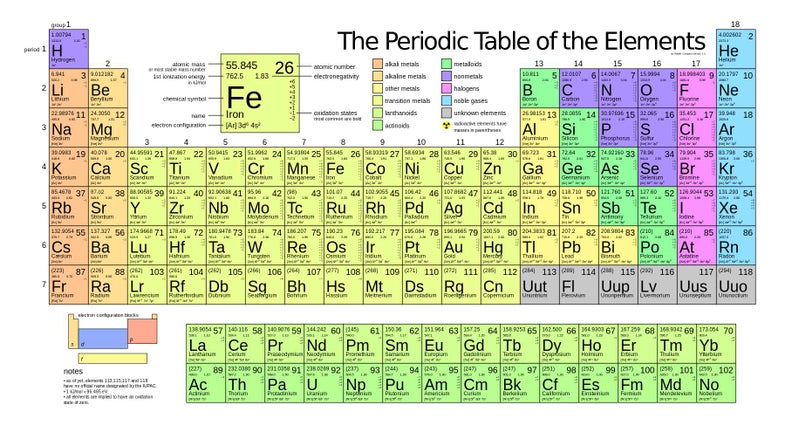 This periodic table of elements is now outdated. 2012rc via Wikimedia Commons
SHARE

The new elements were added after the International Union of Pure and Applied Chemistry (IUPAC) reviewed scientific studies published by teams of researchers in the United States, Japan, and Russia. The committee deemed that the researchers had “met the criteria for discovery,” as the press release notes, which essentially means that the researchers were able to create them in the lab, if only fleetingly.

These elements are among the heaviest in the periodic table and aren’t known to exist outside the lab. They’re highly unstable—just to formulate them in the lab, the researchers had to crash lighter nuclei into one another. The new elements existed for less than a second before breaking down into other elements.

These elements, which complete the seventh row of the periodic table, are the first to be added since 2011, when flerovium (element 114) and livermorium (element 116), also superheavy metals, were added. The new elements have been temporarily named ununtrium (Uut or element 113), ununpentium (Uup, element 115), ununseptium (Uus, element 117), and ununoctium (Uuo, element 118). In the next few months, the teams that discovered these elements will propose new names for them. That’s no easy task, but hopefully they will choose names that roll off the tongue a bit better than the placeholders.

Element 113, which was discovered by Japanese researchers, will become the first element to be named in Asia, according to The Guardian.

Though the periodic table was created in 1869, scientists haven’t yet filled it in completely, or answered many of the lingering questions surrounding these building blocks of the universe; as these superheavy elements decay, they become other elements that scientists cannot yet identify. Researchers still need a better way to measure an element’s atomic number more quickly and directly, as one member of the IUPAC notes. Some researchers, including some members of the Japanese team that discovered element 113, hope to continue their work in superheavy elements to discover those that lie beyond element 119, which has not yet been discovered.