Preserving food isn't hard--the challenge is in the flavor (or lack thereof, or disgustingness thereof) 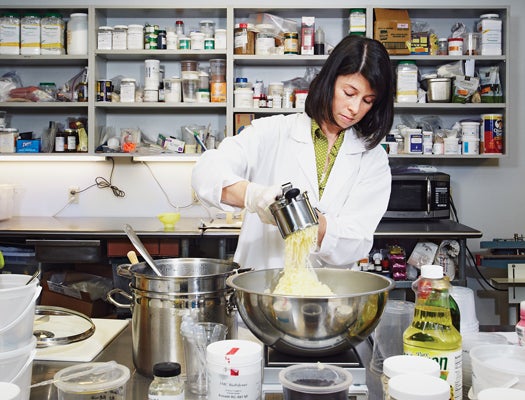 Barb Stuckey hands me a plastic tray of mashed potatoes sealed with an opaque layer of film. “We packaged these up over a year ago,” she says. The United States Potato Board has asked Stuckey and her colleagues at Mattson, a commercial food lab in Foster City, California, to devise a way to put fresh, ready-to-eat mashed potatoes into a package that can sit unrefrigerated on a supermarket shelf for months. Just open, warm, and serve.

The scientists at Mattson have developed some 2,000 successful products, including frozen dinners, bottled salad dressings, powdered cake mixes and jarred salsas. “Shelf-stable” meals of the kind Mattson is working on represent the highly imperfect state of the art in convenience foods. Frozen dinners need to be frozen. These don’t. Hormel, for instance, offers Beef Tips and Mashed Potatoes (with dried, reconstituted potatoes) and Swedish Meatballs with Pasta in Cream Sauce, meals that need no refrigeration and can be stored for more than a year.

What gets sacrificed to the public’s demand for convenience are flavor, texture and nutrients. For food to survive on a shelf for a year, it has to be free of nearly all microbes, and the most common FDA-approved method of ensuring that is fairly primitive. In fact, it is the same sterilization technique that Napoleon’s army used in 1810: Kill all the pathogens by heating food to 250°F in a pressurized vessel called a retort. Hormel Compleats Beef Tips, as a result, taste a bit like canned dog food smells. 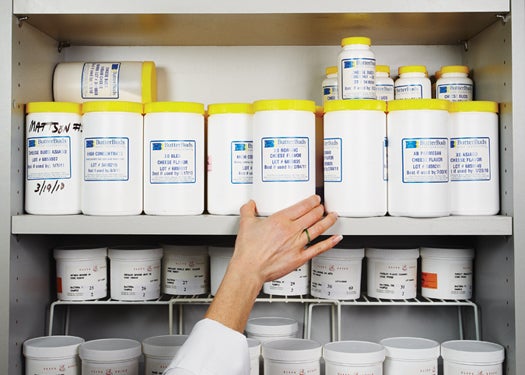 At Mattson, exotic and artificial seasonings are added to preserved foods for mass production.

That’s where Mattson’s scientists come in. Candice Lin, a senior food technologist, walks me through their mashed-potato formula. On her crowded workbench, familiar kitchen supplies—a whisk and a carton of half-and-half—mingle with the specialized: jars labeled “sodium bisulfite” and “natural chicken pan dripping type flavor—for experimental use only.” Preparing the potatoes is easy enough. Peel them, steam them in a pot on a stovetop, and press them through a handheld potato ricer and into a mixing bowl. Add half-and-half to the mash, along with butter, salt and pepper, and certain additional flavorings. I take a forkful of the concoction in the bowl: delicious, buttery mashed potatoes.

“For food to survive on a shelf for a year, it has to be completely free of microbes. Sterilization, though, can turn a meal into something that tastes like dog food.”Now to sterilize them. Lin scoops the mash into half a dozen plastic retort pouches, and we ferry them to the lab next door, which is crammed full of food-processing equipment: a smoker, a pizza oven, miscellaneous frying apparatuses, an industrial waffle iron. The pouches go one by one into a vacuum sealer, which sucks all the air out of each package, replaces it with pure, mostly inert nitrogen, and seals the bag shut. From there, we pull on hairnets and proceed into the pilot plant, where the retort sits. It’s a heavy rusty barrel with a lid that clamps into place. “When you go to a manufacturing facility, like Campbell’s Soup, the retort might look like this, only 50 times as big,” Stuckey says.

The retort fills with water, and the pouches simmer inside for about an hour, until temperature probes sunk into their centers register a microbe-killing number: 252°. After they come out, we tear one open. The potatoes look right, once we’ve fluffed them up a bit, but the wholesome earthy taste and smell of fresh potatoes is almost gone from the dish. In its place there’s a tired, wet-paper flavor with notes of old steam pipe. This side effect of confined high-heat cooking is known in the trade as “retort flavor.” Stuckey’s theory is that it’s just underlying parts of the flavor coming through. Before food is retorted, she says, the dank base notes present in it are masked in part “by the beautiful aromatic volatile notes that we take for granted. When the retort destroys these low-molecular-weight flavors, what’s left is the ugly insides.” How do you make retort-treated food taste better? “The easy answer,” Lin laughs, “is lots of salt and fat.” But for the product to sell, a crucial part of the potato mission is to keep each serving low enough in sodium and fat to stay competitive in the market. 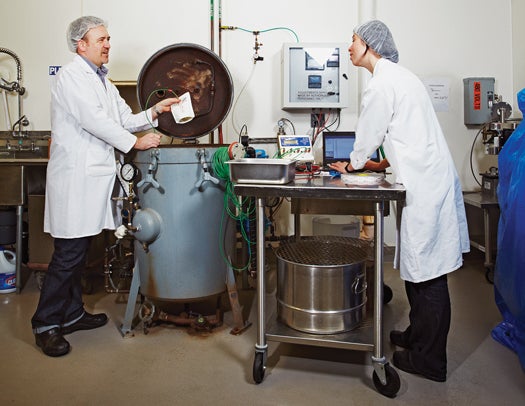 Researchers use a large steel pot called a retort to heat and sterilize food.

Which is where the arsenal of special ingredients comes in. Lin uses a proprietary masking agent made by an industrial flavoring company called Wixon. A fingertipful of the thin white powder tastes like artificial sweetener, but added to the mix in tiny doses it takes the edge off the retort flavor. Another, created by Edlong, a company that makes nothing but dairy flavoring, is a buttery paste that can withstand the heat of retorting. Straight out of the tub, it has a pungent, cheesy, cultured, sweaty-socks odor, but in the finished potatoes, its butteriness is natural and smooth—in fact, too buttery for my taste. Lin says the butter flavoring is just out of balance, and that to achieve the subtlety of real butter requires adding more flavorings to the formula rather than subtracting. “I’ll talk to the flavor company about adding a light butter top note in addition to what we have here,” she says.

After sampling the freshly retorted batch, we taste the year-old mashed potatoes. They’re a dingy papier-mâché color—not enough sodium bisulfite was added to keep them a pleasing shade of white—and after microwaving, their consistency is more clayey than fluffy. And their flavor is so different from that of fresh mashed potatoes that it tastes intentional, as though the team had set out to create an intriguingly funky aged potato product. I kind of like it.

Still, putting food through a violent heating process that strips out the best parts of its flavor, and compensating for that by adding ingredients to simulate the original taste is hardly elegant. There are newer and better methods of food sterilization than cranking up the pressure in giant hogsheads. In France, the food manufacturer Knorr just introduced the first line of boxed soups that are sterilized with electric current—a more efficient approach that leaves the vegetables in the potage more firm and flavorful than a retort can. But new approaches like these, despite their advantages, take decades to make their way into the entrenched and conservative food industry. For now, convenience comes with a cost.

By the way: Barb Stuckey has recently published an interesting book called Taste What You’re Missing, in which she explains how taste perception works, and how to use your sense of taste better.