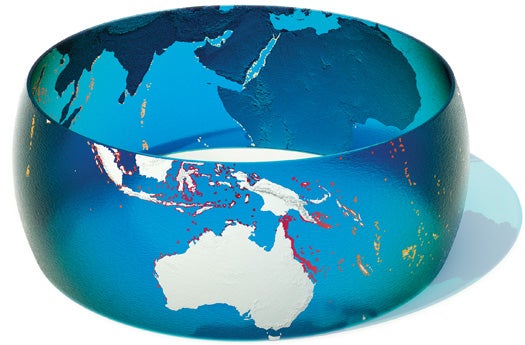 In the past 20 years, nearly a third of the world’s coral has been destroyed. Around 90 percent of the reefs off the coasts of Sri Lanka, Tanzania, Kenya, the Maldives and the Seychelles are at risk. If ocean temperatures rise by another 7ºF in the next three decades, as is predicted, 95 percent of the Great Barrier Reef will disappear. The primary cause of the die-off is coral bleaching. As temperatures rise, marine bacteria flourish and attack the algae that live symbiotically within every individual coral polyp. The algae photosynthesize sunlight into energy (in the form of sugars) for their hosts and give coral its color. When the algae dies, what’s left is a ghostly white.

Some corals in the Red Sea and the Persian Gulf have avoided this fate, although no one knows exactly why. Eugene Rosenberg, a microbiologist at Tel Aviv University, has proposed that the presence of a different form of bacteria is what has made the difference. “Coral has thousands of bacterial species living within it, just as humans do,” he says. “These bacteria can help coral adapt to environmental changes.”

When water temperatures rise to 77º in the Red Sea, for instance, a nonresident species of bacteria called Vibrio coralliilyticus attacks the algae of some corals. But that same temperature spike may also trigger some of the corals’ bacteria to defend the algae, which could explain why certain corals aren’t susceptible to bleaching even at high temperatures. 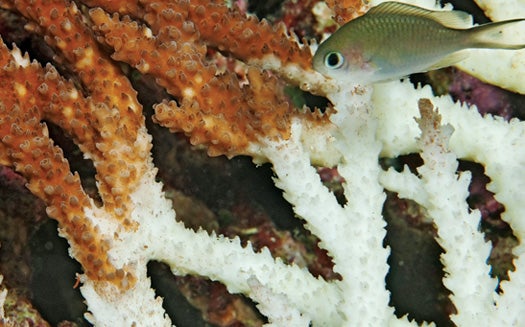 Now Rosenberg and his colleagues are investigating how to boost all corals’ natural defenses. One tactic involves unleashing bacteriophages—bacteria-attacking viruses—on V. coralliilyticus. In recent lab experiments, the phages quickly destroyed the bleaching bacteria and remained on the coral for two months, staving off further attacks. This summer, in parts of the Great Barrier Reef and the Red Sea’s Eilat Reef where some spotty bleaching has occurred, Rosenberg will field-test “phage therapy.” He will surround diseased coral with healthy corals, and in one sample he will introduce a phage. If things unfold as they did in the lab, the phage will attach itself to V. coralliilyticus. When the attacking bacteria reach the nutritionally rich mucus layer of the healthy corals, the phage will multiply 100 times over and overwhelm its host. Rosenberg predicts that his phage-less control samples will become bleached in a week or two.

If he gets positive results, the next logical step will be a much larger-scale application. Rosenberg says that with a little more than 13 gallons of liquid, mixed at a concentration of four million phages per gallon, he could treat roughly 30 miles of coral. The application would require a boat or a plane. “We’re talking about covering a lot of reef,” he says.