An army of hungry little sea urchins could save Hawaiian reefs

A surprising example of a species introduction going well. 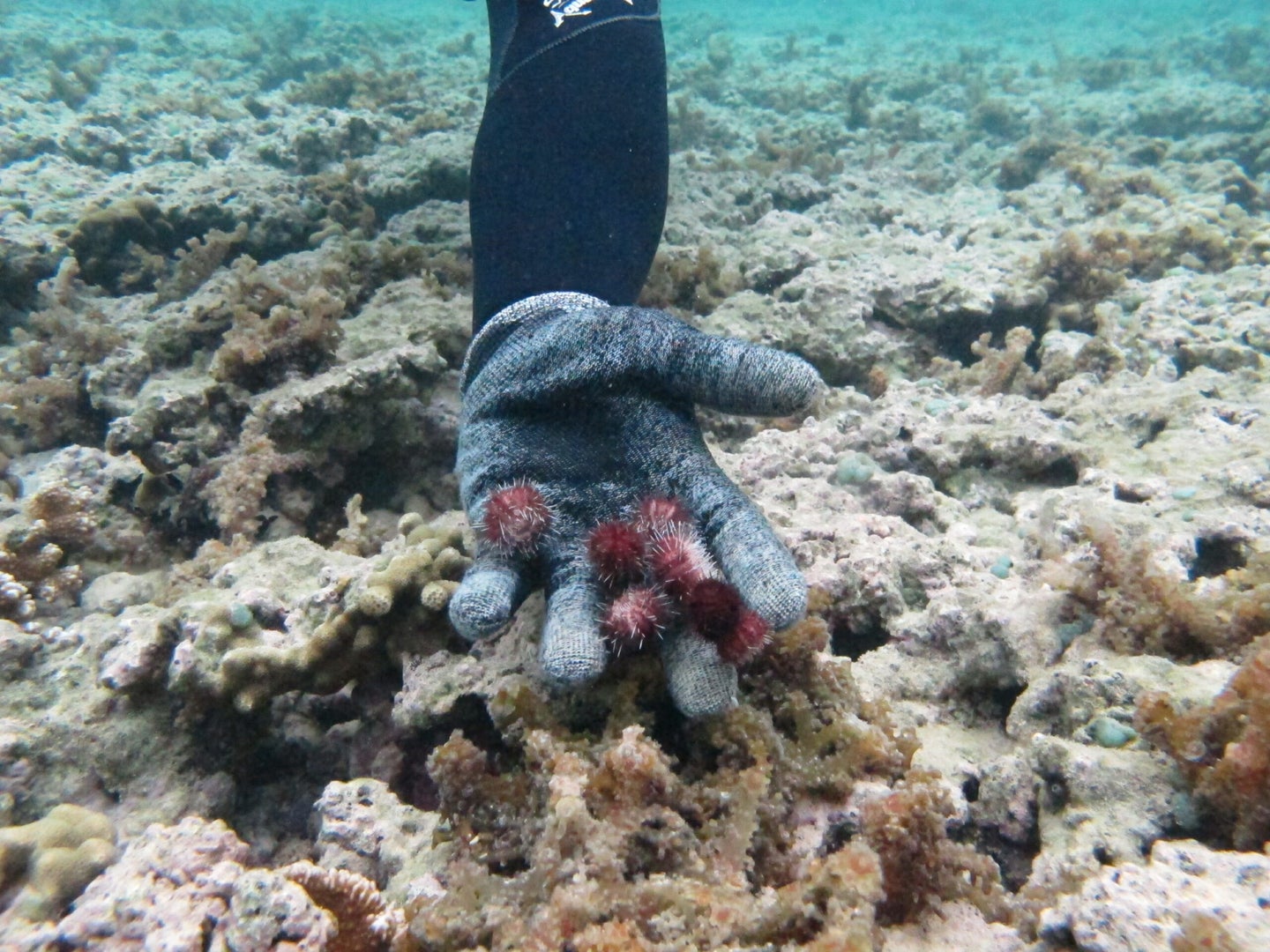 There are a lot of stories of introduced species gone wrong. In Hawai’i, for example, the mongoose was initially brought in to control rats. But the effort missed a crucial point—mongooses feed in the daytime, while rats are nocturnal, so the two never interacted. Instead, mongooses turned to eating birds and endangered turtle eggs.

But Hawai’i is also home to a surprisingly positive story of employing one organism to control the growth of another. This summer, the National Oceanic and Atmospheric Administration announced that 500,000 hatchery-raised sea urchins now reside in Kāneʻohe Bay, off the coast of O’ahu. The little echinoderms are munching away at so-called smothering algae, which had once threatened to kill the bay’s corals.

Invasive algae started harming the reefs of Kāneʻohe Bay in the 1970s, after they were accidentally introduced through mariculture (the algae easily fragments and spreads into new habitats). The smothering seaweed blankets the reef, creating a cover about six inches thick and blocking sunlight from the coral. Many corals rely on plant cells called zooxanthellae to photosynthesize and create sugars and other nutrients, so this seaweed blanket can indirectly kill the corals. The algal mats also change the chemistry of the water, threatening the numerous organisms that live in the reef.

In 2008, NOAA and partner organizations announced a plan—using a combo of manual removal of the algae and, yes, tons of our spiny friends. First, divers cruised across the reefs, ripping out the algae and sucking it away with an underwater vacuum. Then, they brought in trays of cherry-tomato-sized young sea urchins. The animals, native to Hawai’i, are known to eat at least five species of invasive algae. And their small size lets them get into cracks and crevices in the corals, where they feed on hard-to-reach seaweed.

Two years after this treatment, the patches of reef that were vacuumed and seeded with urchins had 85 percent less seaweed cover, reports a study on the effort. “It just shows that there are ways to help reefs during the overarching problem of climate change,” says Christopher Wall, coral biologist at the University of Hawai’i and an author of the study. “It was a great success story, really.”

The urchins continue to keep algae at bay, and there isn’t any vacuuming going on in Kāneʻohe Bay right now, says David Cohen, manager of the sea urchin hatchery at Honolulu. Staff bring in wild-caught sea urchins each month to the hatchery, where they gently shake the echinoderms to induce spawning. They combine the gametes in tanks and the fertilized eggs become microscopic urchin larvae, which look like tiny translucent spaceships and feed on phytoplankton. After four to six months, these larvae have metamorphosed into bottom-dwelling sea urchins 15 millimeters in diameter—ready to be scooped up and strategically placed into the reefs. “I think we’ve done really, really good work here,” says Cohen of the invasive algae control project. “I do believe this technology and this concept could be very useful in other parts of the world with similar problems.”

Smothering algae have blanketed reefs in other tropical regions, says Wall. And the methods to control them have sometimes been harmful to aquatic life, including heating up the water, adding bleach, and altering water salinity. So far, the Honolulu hatchery is the only operation growing urchins to help protect reefs, and the urchins have only been used in Kāneʻohe Bay at this point, says Cohen.

Unlike the case of the purposefully invasive mongooses, adding additional sea urchins likely won’t create any new problems since these animals are naturally found in this environment. Native sea urchins are good creatures to use for biocontrol, says Wall, because they’re not very mobile and have existing predators to keep their population in check.

Algae isn’t the only threat corals are facing. As humans continue to warm the planet, these foundational organisms will be lost to bleaching, in which warm temperatures lead corals to eject their zooxanthellae; the bleached corals are left vulnerable to disease and stress and sometimes die as a result. Wall says that there were extensive coral bleaching events in Hawai’i in 2014 and 2015, and officials are anticipating another this year. But protecting the coral from other problems, like algae, could help them survive these destructive events. “Climate change is a serious threat, but we don’t have to kick the reef when it’s down,” says Wall. “We can do things to help mitigate those effects in the short term that hopefully help corals in the long term.”