Two Big, Bad Playstation Services enter. But only one service is the right service for you. 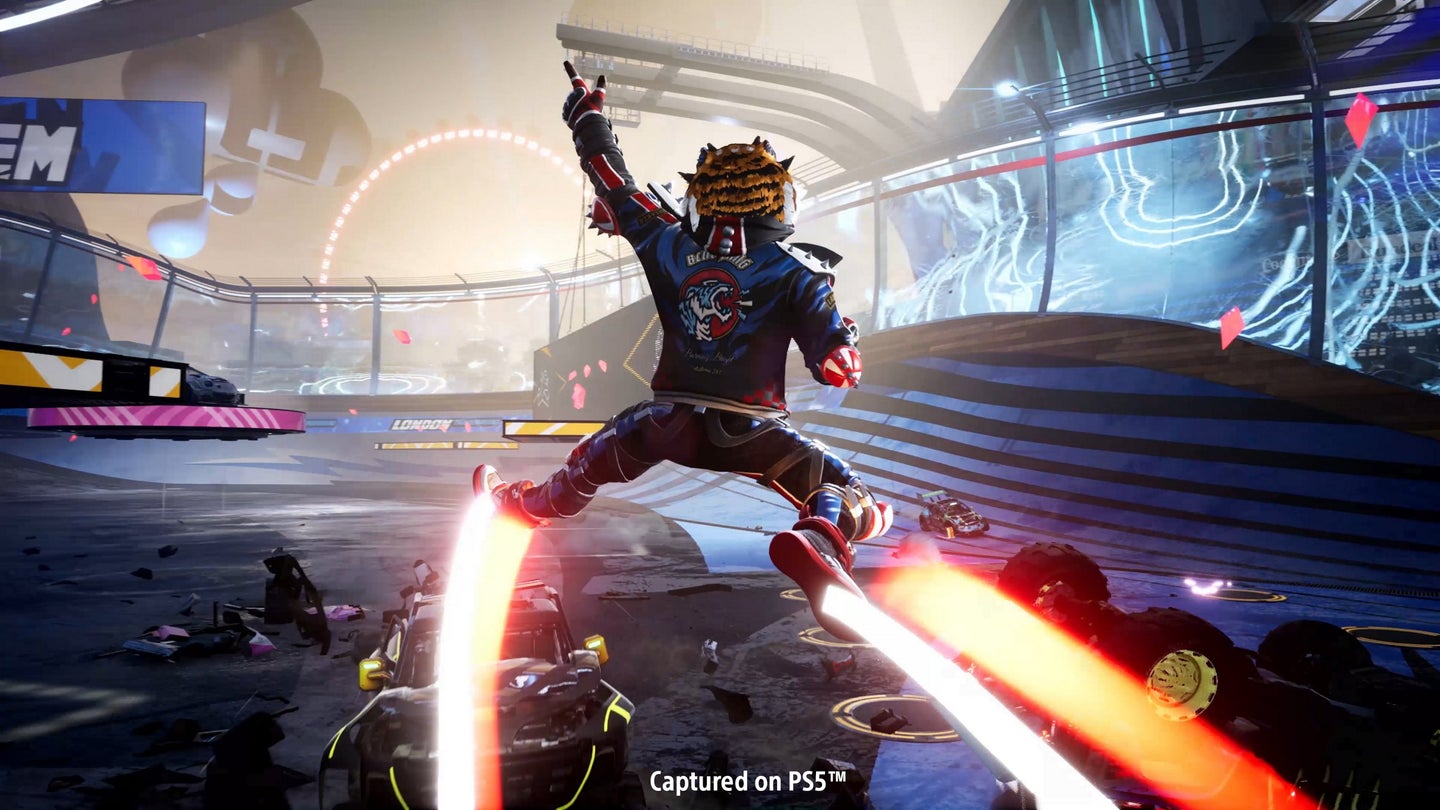 Destruction Allstars debuted on PlayStation Now back in February of 2021. Sony
SHARE

Fact: The Playstation 5 is an attractive object. So attractive, in fact, that we would not mind sitting across from the PS5 in the dimly lit corner of an old steakhouse in Brooklyn on a gloomy Friday evening as the two of us, canoodling up a storm, attempt to polish off The Lovers’ Porterhouse for two.

However. as gorgeous as the PS5 itself is, the hardware can only live up to its massive potential with the right support. We’ve already gone over the best PS5 games for showing off what the console can do, but it’s missing a crucial element: connectivity. Enter the PS Now and PS Plus online subscriptions.

Indeed, these stout, sturdy services, both straight from Sony HQ, can make your PS5 even more functional than it already is.

Before we go further, a warning: It’s easy to confuse these two services. What is Playstation Now vs. Playstation Plus? And who’s on First, Abbott? While writing this story, even our Playstation “expert” got a little tangled in the great Plus-and-Now conundrum. Take our hands and hold on tight…

Q: Do I absolutely have to sign up for one of these services?

You do not. The PS5 works fine without Plus or Now. Consider these services high-tech bells and whistles for the console.

Q: Then, why are we even having this conversation?

Valid question! Because Plus and Now enhance your PS5 entertainment experience substantially—as you will soon know.

They do. Prices are ahead, promise.

What is Playstation Plus?

In other words, if you are a diehard multiplayer gamer, then you need Plus—without question. This is how you play PlayStation online. You could install the game, maybe click around in the menus, but you can’t enjoy any of that multi-player action you’re looking for. Your Twitch viewers probably won’t be very excited about that.

In addition to accessing the top-shelf online multiplayer experiences, Plus also offers a rotating roster of gratis games every month. Yes, we are talking about freebies. In July 2021, for example, Plus subscribers got the following games for nada:

These games are Plus’s equivalent to the prizes found at the bottoms of cereal boxes back in the ‘80s. Knowing that you get these free games? It somehow makes the cereal taste better.

As long as you’re a Plus subscriber, the downloaded freebies will stay snuggled up all cozy-like on your PS5’s hard drive. However, if you pull the plug on your Playstation Plus subscription? POOF. Those Plus freebies slip right back into the digital ether again.

How much does PlayStation Plus cost?

In other words, the more of a Plus commitment you sign up for, the more greenbacks you’ll save. We did the math for you (you’re welcome!): A 12-month PlayStation membership at $59.99 prorates to $5 per month. That’s half of the $9.99-for-one-month price of Plus. (One month for $9.99 is the least wallet-friendly deal of all.) If you like Plus, then go ahead and buy more Plus.

Plus also affords Plus subscribers a 100 GB cloud-based subscriber-only storage account that’s devoted exclusively to your saved games. That 100 GB of complimentary storage frees up a decent chunk of the PS5’s beefy storage—which means you can download even more games.

There’s also a feature called Share Play which Plus subscribers have exclusive access to. Share Play allows Plus subs to “share” game experiences with pals—either for playing or watching—even if said your pals don’t actually own the shared games or have Plus subscriptions themselves. There is, however, a 1-hour time limit on Share Play; though, to be fair, as soon as your Share Play hour is up, you can promptly launch another hour (and another hour after that). Also: To play multiplayer together over Share Play, both players will, in fact, need Plus subscriptions.

Is it a little confusing? Sure is. Playstation seems to be ironing out the kinks in its messaging with Share Play.

Our advice: Check out Share Play for yourself. Try it first-hand. See if it’s something that appeals to you and your gaming pals.

PS5 owners also get the Playstation Plus Collection library when they sign up for Plus. Yes, this is exclusive to PS5 owners.

Don’t have a PS5? Then you can’t access the Library. Sad face.

The PS Plus Collection (at press time) contains 20 five-star games from the PS4’s library—with each game optimized to run on the PS5. We’re talking about God of War, The Last of Us Remastered, Bloodborne, and Batman: Arkham Knight, to name a few.

Yes, diehard Sony fans will have played most of these games already. Yet it’s still somehow weirdly comforting to know that these AAA games are always sitting there, off in the wings, waiting to be played/replayed—should your Gilmore Girls/Bridgerton/Cora Kai binge-party wrap up early this week.

Finally, Playstation discounts abound on Plus—on both the hardware and software fronts. That means bargain prices galore for games, controllers, and all manner of first-party peripherals. In fact, Plus discounts happen so frequently, the discounts can more than offset the cost of the monthly subscription fee.

PLUS PRO TIP 1: If you’re hunting for a competitive price for Plus, and you simply can’t wait for Black Friday/Cyber Monday/Taco Tuesday, the website CD Keys reliably sniffs out the best Plus deals for you like a trusty truffle pig, then delivers said deals straight to your Inbox, saving you both time and money on Plus renewals.

“Stacking” Plus subs like this means that, 1. You’ll save tremendous amounts of cash, and 2. You won’t have to concern yourself with Plus renewals/truffle-pigging for great deals for a very long time.

What is Playstation Now?

What is Playstation Now? Imagine Netflix but with video games instead of 1,001,780 seasons of Friends.

That’s the gist of Playstation Now, Sony’s other premium subscription service that’s designed from the ground-up for the Playstation line of products. Believe it or not PS Now has been around since 2014—back in the era when Pharrell’s “Happy” was playing on the boombox 24-7.

Instead of purchasing discs in ye olde game store, Playstation Now gives you an astounding 800-plus Playstation titles from the PS2, PS3, and PS4 eras. In other words, instead of pulling on a pair of sweats and venturing to the mall, Now allows you to remain in your alfresco state—so European of you to game without a shirt—and select a new-ish game straight from your TV set.

Sure sounds like the future, right? It is. And it isn’t at the same time. Let us explain.

The Golden Corral of games

Depending on who you talk to, Playstation Now is either mediocre or it’s great.

Your opinion depends almost entirely on the quality of the Internet service in your neighborhood. If you’ve got the fiber optics, and the advanced 1407-DZ09 router (*just made that up) then Now is great.

If you don’t happen to have a blazingly fast Net connection? Then Now’s lag time can become a sore spot for you real quick.

Playstation Now supplies its subscribers with two distinct options: streaming or downloading games. Yes, some titles can be downloaded—but not all games can be downloaded. It gets confusing, and digging into the program on your own is the only real way to find out how to interact with the things you actually want.

And if you stream? Well, things will get a bit more complicated…

Confession: We have always been partial to Batman: Arkham Origins (Warner Bros. Games, Montreal, 2013). And we were, sincerely, over the moon to find this underappreciated title in the Now library.

However—and it’s a very big, however—the sole option for Origins is to stream. This means that our experience of Arkham Origins was entirely dependent on our moody Internet connection here in Toronto.

Unlike streamed movies and TV shows, a streamed game is a two-way street; it must accommodate input from the user. If I press the X button on the Dualsense controller, then something amazing should happen on the TV screen.

But should you attempt to stream-play a game at a particular hour—early evenings are notoriously the worst possible time of day for streaming here—lag can slow Arkham Origins to a crawl.

And that’s when the curse words are spoken and the parlor furniture gets overturned.

The Fickle realm of streaming now

Sony “recommends” an Internet speed of 5 Mbps for Now to stream at 720p.

However, if you want to play a modern, top-tier game, then your Net connection must ideally achieve 15 Mbps minimum. For 1080p, Sony recommends download speeds of 35 MBPS (!), and uploads of 5 MBPS. If you don’t have sweet download/upload numbers like this? And you’re a hardcore gamer who appreciates super sleek, super smooth visuals? Then you will be frustrated, without question, by Now’s still-evolving technical limitations.

Especially if we’re talking about a modern AAA game (like Arkham Origins) with high-resolution graphics and plenty of action (i.e., ’splosions!) onscreen, the Downloaded version is simply going to look better, play better and, not chop like an over-caffeinated sous chef.

Not every game on Now is available for download. This brings us to Rule 2…

Stream at your own risk.

The majority of titles in the Now library are only available for streaming, i.e. you cannot possibly download them. Know that streaming—even with a solid Net connection like ours—is still a frustrating crapshoot.

Yes, frame rates will plummet suddenly, for no apparent reason, particularly in those early evening hours when neighborhood bandwidth is taxed. Visuals will blur unexpectedly. Lag will delay on-screen reactions by a half-second or more.

Can you still have fun? While streaming? Even with lag? You can. Just know that if you are streaming via Now, there will be issues, and frustrations, and overturned furniture, from time to time. But, yes, streamed games, though not at their best on Now, are still largely playable.

The first Tuesday of every month is “Now Tuesday”

The first Tuesday of the month is when Playstation Now is updated with its flashy new games. Mark your calendars accordingly.

Find a good price. Buy subscriptions in multiples. Then enjoy Now for a long, long time.

PlayStation on your PC

Sounds like sacrilege, we know, but playing Sony Playstation games on the machine that Bill Gates built—it’s a reality, folks.

Indeed, Sony’s first-party games have been quietly slipping over to PC in the last two years. Horizon: Zero Dawn (2017), previously a PS4 exclusive, is available via Steam. Expect more Sony exclusives to follow.

Playstation Now is terrific. However, it still feels like a prototype for how video games will be consumed in the future. For the moment, consider Now an ongoing work-in-progress. If you’re a hardcore gamer, Now, in its current form, is probably not for you.

However, if you’re a more casual gamer? Or if you’re new to gaming (or happen to be returning to gaming after a hiatus) (we all take gaming breaks from time to time)? Then Playstation Now is a fine place to start.