What We Know (And Think We Know) About The New Xbox 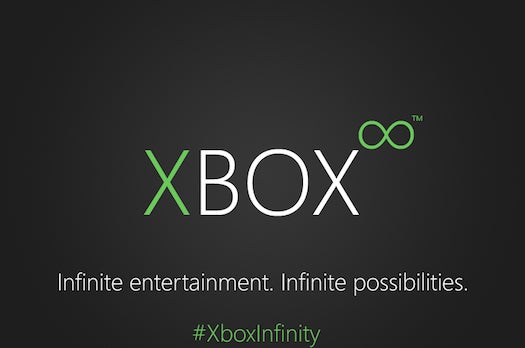 Tomorrow, Microsoft will announce its long-awaited next-gen Xbox. The rumor mill has been churning for months–years, even–and reports with varying credibility have appeared. Here’s what to expect.

This is surprisingly up in the air. Unlike the PlayStation 4, which we could at least guess at because of consistent branding until that point, the new Xbox has had a couple names thrown around. At Microsoft, internally, it’s been called “Durango,” (that’s almost certainly just a code name; Microsoft always uses code names for products, which very very rarely ever leave the Microsoft campus) but the leading candidate after a report from the International Business Times UK, crediting unnamed sources, is Xbox Infinity. That’s possible. Also thrown around: “Loop,” and Xbox 720 (boring).

Another rumor that’s been bouncing around as of late (maybe more than “as of late” at this point): you’ll need an internet connection to use the Xbox. As in, if you don’t have a way to get on the web, you won’t have any use for the new Xbox. Microsoft might use that constraint to seamlessly integrate software updates, but it could be bad news for anyone with a spotty internet connection, or even just an outage. Reasonable or not, the idea was met with ire from most of the gaming community.

Now others are reporting on a leaked memo that apparently stomps on this rumor. Microsoft might’ve walked the idea back after the negative reaction to a (correct) leak, or they might never have been planning to have a mandatory connection in the first place. Or, heck, it might still be what happens. A connection might also be required for some functions, while not for gaming. Tough to tell at this point.

CHANGES TO THE KINECT

What will likely be mandatory for the new Xbox is Kinect, Microsoft’s motion-tracking camera that first came with the Xbox 360. (The leaks seem to be pretty consistent on that front.) It might even be necessary to set up and adjust the camera for the Xbox to start. There’s probably been a few adjustments to the Kinect, but it’s tough to say exactly what those adjustments might look like. Motion tracking for up to six players, perhaps? Or an increased resolution?

Obviously, the games will look prettier. How much prettier? Well, you can check out the spec breakdown here, if you’re into that kind of thing. It’s been compared to what we saw in the PS4, and we’d venture to guess the PS4 vs. Xbox war won’t be won on graphics alone.

Meanwhile, the new Xbox will reportedly include a Blu-ray player. (About time; Microsoft has fought off including a Blu-ray drive for two generations now.) There’s also word of it having an HDMI-in port, which would lead to the conclusion that Microsoft is trying to make a console more integrated into your TV: the port could directly connect to your cable box, letting the Xbox overlay information while you’re channel surfing. Microsoft has always been more non-gaming-focused than Sony; the Xbox is a stellar entertainment device, as good as any Roku or Apple TV, in addition to a console. So will the next Xbox be the Living Room Console to Sony’s Hardcore Gaming Console? Possibly!

Pricing is still a little up in the air. An estimate of $500 or $300 with an online subscription has been ballparked, and that’s probably as good a guess as any at this point. (It’s very possible they won’t mention pricing at all during the event, though.) What does seem probable is that it’ll be out this holiday season. It’s hard to imagine that Microsoft would plan an announcement this close to Sony’s announcement and not compete with them in November or December.

We may or may not see what the new Xbox looks like at the event: if they did show us, it’d be the perfect opportunity way one-up their rivals after everyone (including us) balked at not seeing the PS4 at Sony’s event. But right now, the truth is we don’t know all that much about what this console looks like. The gaming blog Kotaku had some leaked info about the controllers: apparently they’re almost the same as the current crop of controllers, although those won’t work on the new system. Expect minor tweaks there and hope we get a gander at the actual console-box tomorrow.