Playstation VR Vs. Oculus Rift Vs. HTC Vive: Here’s How They Stack Up

Which should you buy? 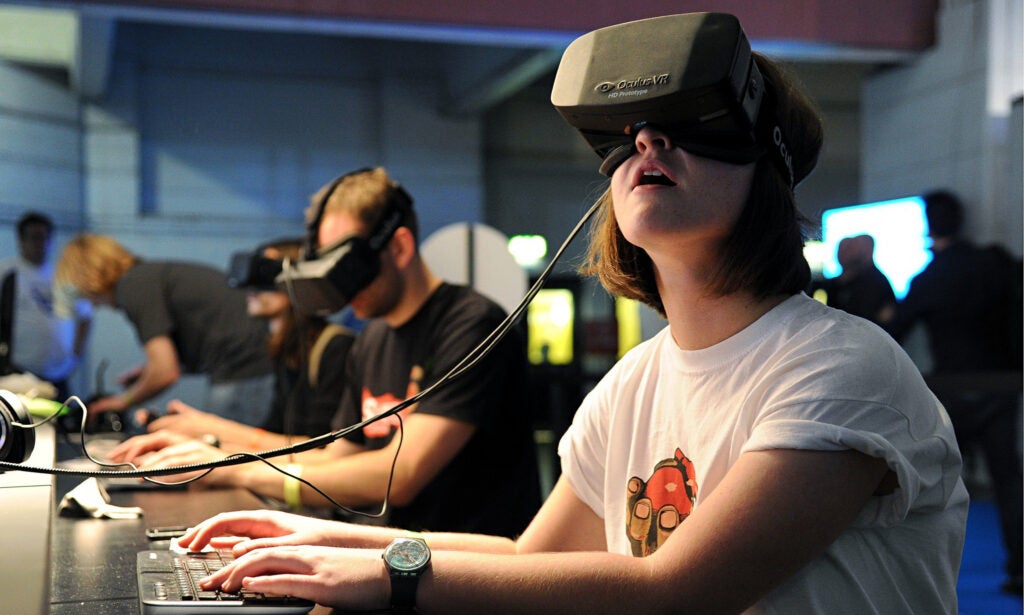 Now that Sony has finalized its PS VR pricetag, it’s time to compare the headsets

Sony announced earlier this week at GDC 2016 in California that the Playstation VR will cost $399 and be released in October 2016. Now that the three major virtual reality headset makers have finalized consumer versions and release details, proper comparisons can be drawn between the three: Oculus Rift, HTC Vive and PS VR.

The Oculus kicked off the modern VR craze while the Vive teamed up with Steam’s Valve to offer suitable competition. Sony, on the other hand, represents the console side of VR. With varying price tags, content offerings and experiences, it’ll be important to know all the details before taking the plunge and scooping up a VR headset. Here are the important things to know. 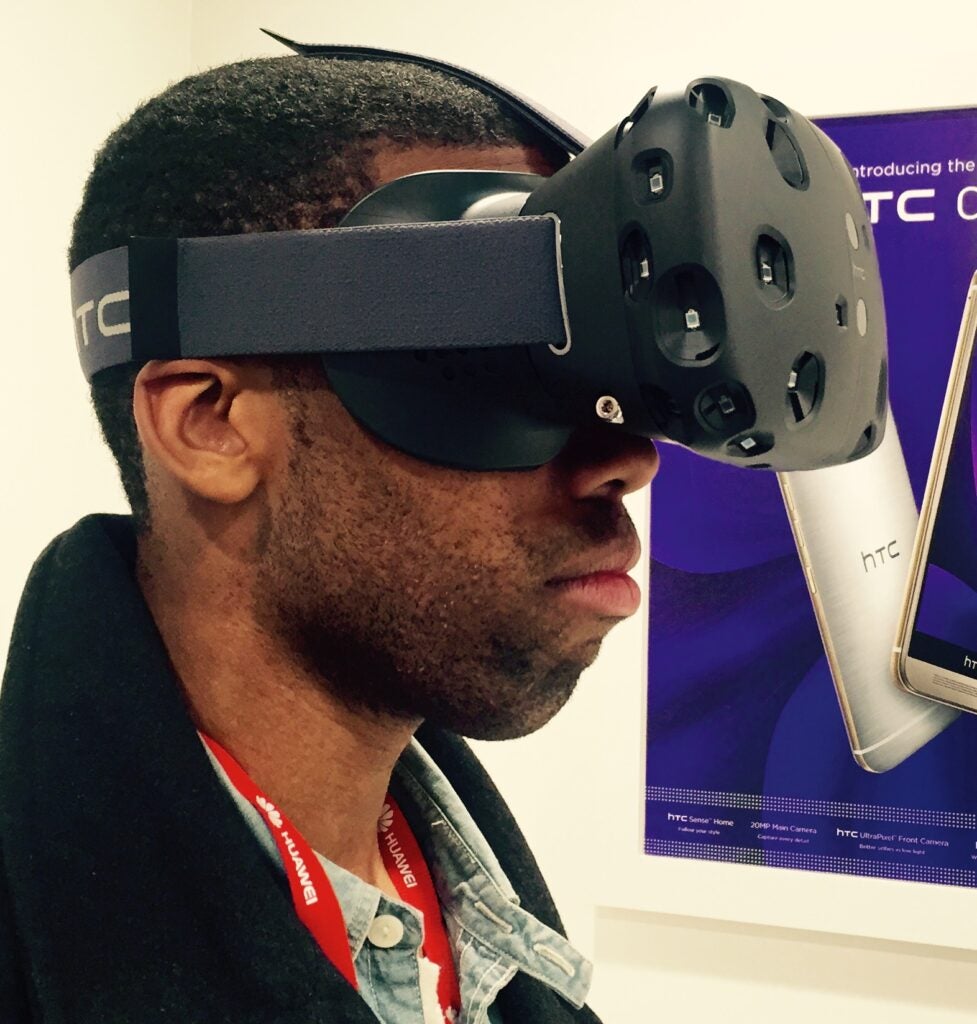 Be warned: it is impossible to look cool using a VR headset

Let’s get one thing out of the way. You will not look cool wearing any of these headsets. You may feel cool in virtual reality in your EVE: Valkyrie spaceship or fighting enemies in Bullet Train or even in your VR work cubicle. But without a doubt you’ll look ridiculous to those on the outside looking at you–regardless of which headset you choose. The lameness factor almost negates the design.

That said, all three headsets carry distinctive looks. The Oculus presents users with a smooth rectangle front, the PS VR goes with a black and white design with striking lights on the front and the HTC Vive goes with the dimpled look.

The headsets each have their individual perks: the HTC Vive, for example, adds an external camera on the front to see out the other side. PS VR provides an inline remote on the unit cable to increase and decrease volume and the lights on the front match the glowing controllers. Oculus Rift’s headset is relatively bland, but the Touch controllers coming later this year look among the coolest of any VR controller.

Sony listed out the Playstation VR’s tech specs on screen during its GDC 2016 press conference. Included in the glowing headset is a 5.7-inch screen, a resolution of 1920xRBGx1080, a field of view of 100 degrees. The Oculus Rift and HTC Vive both have resolution clocking in at 2160×1200, and both offer a field of view of 110 degrees.

Sony made no mention of tracking area, as the PS VR is a seated experience, but Oculus offers 5 x 11 feet of tracking while the Vive can get up to 15 x 15 feet.

All three require HDMI and USB connections–meaning a giant wire will flow out the back of your head, Matrix-style (which seems somewhat appropriate for this kind of product). 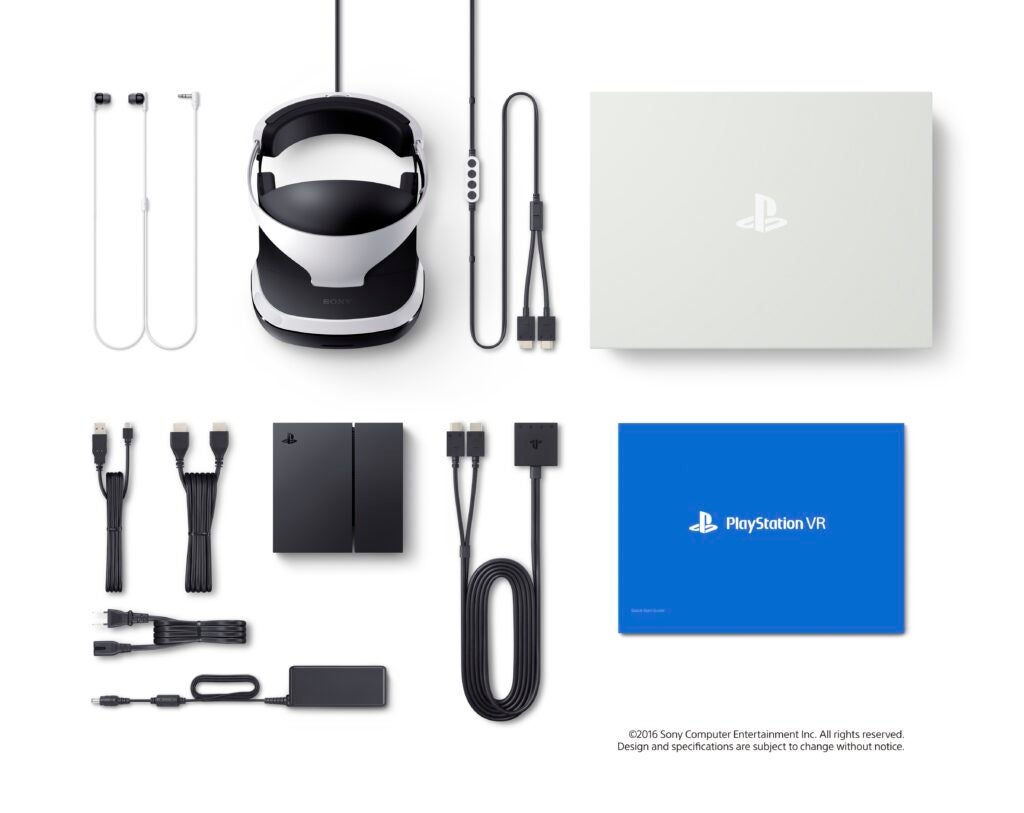 What comes in the box

Of the three major gaming virtual reality headsets, Playstation VR does the best in regards to price. The PS VR will run users $399. The VR headwear is thoughtful enough to ship with earbuds and mic but not gracious enough to come with another requirement: the Playstation Camera—which is sold separately for $60. And you’ll need a PS4, of course, which itself costs $349. Or if you’re new to the PS4 family, you can buy a new PS4 bundle with the camera included for $549, then the $399 PS VR on top of it. But all said and done, it remains cheaper than other VR gaming options…

On the Oculus Rift front, users can expect to pay $599 for its unit and expect shipment in late March. Along with the headset, Oculus is pairing its helmet with an Xbox One controller and two games for those who buy now: EVE: Valkyrie and Lucky’s Tale. Though this too comes with hidden costs: the Oculus will require a powerful PC to work with it. The company recommends rigs that start at $949.

The most expensive of the three is the HTC Vive. HTC and Valve’s VR preorder presents buyers with the most expensive option yet. Shipping in May of this year, the $799 headset comes with two wireless Vive controllers and games like Job Simulator, Fantastic Contraption and Google’s Tilt Brush. While not big budget titles, there are already some interesting Tilt Brush creations that have hit the interwebz.

But it isn’t just about the games that come with each VR unit, but the ones on the way as well. Much like the current state of affairs with console and PC gaming, titles won’t work with other VR headsets by default. Though there is some overlap.

The Oculus Rift will see titles such as EVE: Valkyrie, Rockband VR, and the shooter Bullet Train—a shooter that lets you fire at enemies and even catch bullets to throw it back at opponents. It’s also worth noting that the Oculus Rift will launch with 30 titles. Not all are quality, but at least you’ll have no shortage of content come March 28.

The HTC Vive will see similar various VR games from small studios in addition to the titles the headset ships with. But most interestingly, with Valve involved, the HTC Vive will have access to Steam’s library. Along with the ability to play “flat” Steam games in a virtual room, any upcoming games from Valve like Portal will almost undoubtedly come to the Vive. Not to mention the Star Wars Trials On Tattooine game.

Like the Vive, PS4’s VR headset will allow users to play non-VR in virtual reality via a cinematic mode. Along with EVE: Valkyrie also coming to Sony’s console are Rez Infinite, RIGS and VR content exclusively on Playstation for Star Wars: Battlefront. Many developers are also on-board to create VR content on Sony’s console including Electronic Arts, Sega, Square Enix, and more.

With the PS VR price and release window finally announced, buyers can make a better informed decision about which they should go with. The Playstation VR headset costs the cheapest and still allows for a full-on gaming experience. The Oculus costs in the middle and offers pack-ins like EVE: Valkyrie and an Xbox One controller. The HTC Vive costs the most but may be worth the cost if you’re a Steam die-hard and want to make sure you have the most futuristic VR headset.

In the end, it’s up to you. If you’ve always preferred console gaming over playing video games on your PC, the PS VR is for you. If you’re looking for an affordable VR option but are a PC die-hard, the Oculus Rift could better suit your needs. If you rely on Steam and want deluxe features like a camera that lets you see on the other side of your headset or the ability to pair your phone via bluetooth for notifications, the HTC Vive has got you covered. Choose well, and be ready for an empty wallet.