Here’s What We Learned About The Xbox One At E3 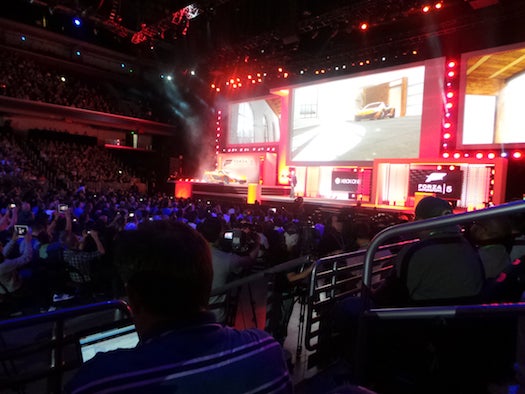 Microsoft’s unveiling of the Xbox One back in May was decidedly about the hardware. Almost right away today at E3, Microsoft announced its conference would be “all about the games.” Sure, there were a lot of games, but that didn’t turn out to be completely true: there were plenty of announcements about the console itself, too. Here’s what we learned.

Microsoft made a point of showing off integration with tablets and mobile devices through Xbox SmartGlass. It’s more or less gaming with a second screen, a la the Wii U. As you play a game on your TV, a tablet or smartphone can connect also connect to the game, displaying relevant information. A “timeline,” for example, might show off your progress in the game, or offer up some statistics on your play. You can also check in on what your friends are doing.

Possibly the most unexpected part of the conference came early, when Microsoft announced a redesigned Xbox 360–as in, the Xbox that the new Xbox One will replace.

Why Microsoft decided to unveil that now–when the Xbox One will be coming out this winter–is up for debate. This could either be dressing up the 360 for its funeral–ensuring there’s a consistent design scheme across the consoles–or some kind of integration with the Xbox One we aren’t sure about yet. The company didn’t seem to put much stock in the 360 announcements, including games, either way. (Get out of the way, grandpa.)

As for the actual Xbox One games, Microsoft is trying to please both sides: people looking for new games and people who want the next installments in their favorite series. There’s some wholly new franchises that are still working in established game genres, as well as sequels to already crazy-popular games.

The new stuff runs the gamut from a sword-and-sandals epic (Ryes: Son of Rome) to an unexpectedly day-glo zombie shoot-’em-up called Sunset Overdrive (and the way less interesting-sounding Dead Rising 3). Also coming: a murder-mystery (D4) right next to a very Pixar-ish game called Max: The Curse of Brotherhood. You can’t accuse Microsoft of not offering some variety: There was a quiet adventure game called Below announced, if that’s your bag, right next to a flashy, cyberpunk game that didn’t seem to even get a title announced.

Microsoft is betting that established titles will be what really draw people in. The big one: a new entry in the Halo series coming in 2014. There is apparently a giant robot-bird thing in it. There’s also the much-hyped Titanfall. (That one features several giant robots, but who’s counting?)

The event kicked off with another entry in the reliably popular techo-military-mystery Metal Gear Solid series. This one’s called The Phantom Pain. (It’s voiced by Keifer Sutherland, of 24 fame, for some reason.) The beloved PC game Minecraft is also getting an Xbox One version, while a fifth Forza Motorsport racing game came was announced, ostentatiously, as a McLaren was lifted up out of the floor (!). The next installment of the Battlefield franchise also popped up, which you will soon see make a ridiculous amount of money.

The new Xbox One will be coming in November and will cost $499 if you live in the United States. If you live in Europe and want the console, then, sorry, you’ll be shelling out 499 euros, or about $660. That’s… probably a little more than anticipated. We’ll see how it stacks up if PlayStation announces a price at its event.