Can Playing Video Games Be Your Full-Time Job? 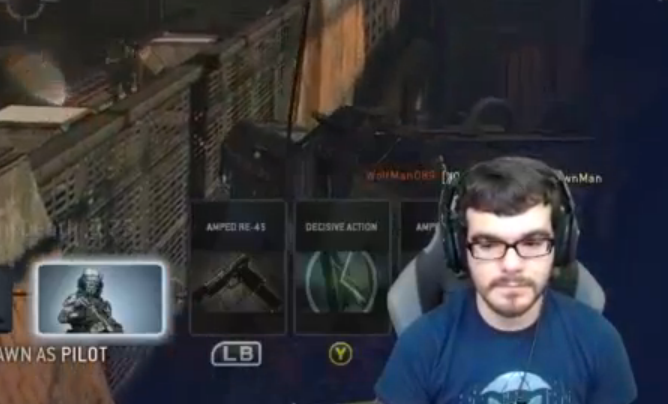 Over the past several years, the video gaming industry has evolved from a play-to-win sport to something more like the music industry, with fans paying to be entertained live by performers they love.

For those who make a living from gaming, Twitch—one of the major hosts for console and PC streamers around the world—is the main place to be these days. With half a dozen ways to gain revenue, it can be the most profitable channel, if you’re willing to work hard and play smart. But does it bring in enough cash flow for it to be a full-time job? With that in mind, we turned to two Twitch streamers who follow two different approaches to earning a living in the streaming business. We asked them how exactly they make their money, and why they ended up on Twitch.

Twitch is a streaming service. Think of it as YouTube but for live video game content. Viewers create accounts and follow streamers, who play games live, and interact with their viewers. It began as a start-up company in 2011 and quickly became one of the leading hosts for e-sports. In 2014, Amazon bought the company for 970 million dollars. Currently, Twitch has 100 million monthly viewers, each spending a little less than two hours a day watching live gaming. That’s just shy of the Super Bowl for faces in front of screens, every month, so whether you’re one of them or not, you probably know someone who is.

And then there are the streamers themselves, one million people who play for audiences ranging from hundreds of thousands to no one at all.

Ray Narvaez, whose user name on Twitch is BrownMan, left a full-time job at a production company called Rooster Teeth to join the video streaming culture. For him, the lure of being able to interact directly with the viewer drew him to video streaming and eventually to Twitch. “I liked [it] way more than putting up a video [on YouTube] and having to talk to viewers in the comments section.” 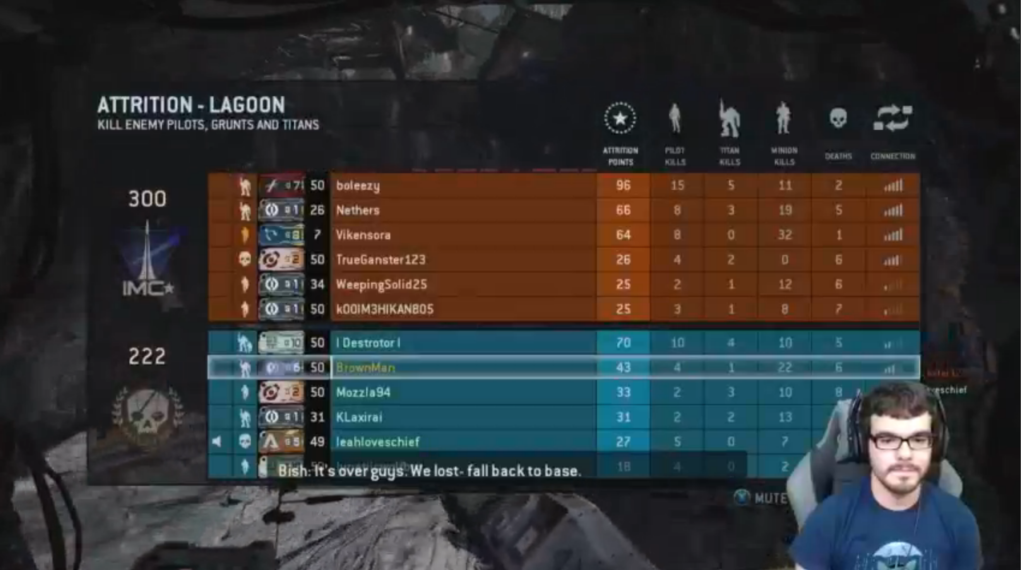 Narvaez doing a co-stream last month with Leah, which demonstrates some of the cross promotion that streamers do with one another.

However, the jump to full-time streaming can be nerve wracking, as it means giving up a guaranteed paycheck to move to a job where the money fluctuates from day to day. “While there is no limit on how much you can make on Twitch, there is also no safety net of ‘this money is guaranteed,’” Narvaez says. For Narvaez, the confidence he needed to keep going came on his first day when he received upwards of 20,000 dollars from people who wanted to help facilitate his transition to full-time streaming. “Once that first stream was done, I was able to take a breath,” he says.

While Narvaez made the decision to quit his full-time job and dive headfirst into Twitch other gamers also have part-time jobs elsewhere.

Leah—who, like many streamers, prefers not to share her full name in order to keep her private life separate from the streaming world— streams on Twitch as LeahLovesChief and mostly plays the game Destiny. She is also a freelance videographer, a job that is perfect to have along side streaming, she says. “[This is] partly because we have experience [in] videos and online content which is always very useful for streaming, and partly because the workload can be sporadic so I have a lot of time where I’m not working and I can stream.”

How do they make their money?

Subscriptions are the most straightforward source of income for Twitch players. While Twitch is free-to-watch for most viewers, subscribers have the option of paying a five dollar fee, which gives them some extra perks like access to previous streams and custom emojis to use in Twitch’s chat system—both of which may give them a bit more attention from the streamer. However the money coming in from subscribers doesn’t get distributed evenly to every streamer. In order for a streamer to take on subscribers, he or she must be considered a “partnered subscriber,” which is no easy feat. It requires a certain number of average monthly views as well as a certain number of people who are willing to “follow” (followers don’t always become subscribers, though) before Twitch essentially agrees to pay you for the content you provide as a streamer. The monetary compensation that streamers receive from subscriptions is a flat fee that the streamers receive monthly based on their viewer numbers, which can vary wildly from month to month.

However, that is just the base income. The best way to make money on Twitch is through tips and donations. According to Leah, tips can be very helpful to a new streamer, to both improve their equipment and simply make their life a little easier.

“If you aren’t partnered,” she says, “The only ‘income’ you could have is from tips where people can tip you some money via Paypal as a thanks for the entertainment.” However, Leah admits that this can be a difficult concept for other people to comprehend, “that people send other people money for ‘playing video games.’”

Leah says people often do tip because the hours of entertainment or joy they receive from a streamer, especially a good one, is worth a voluntary monetary contribution. “Some people are very wealthy and enjoy seeing the reaction of a streamer given a huge tip, and some people like giving small tips to have their messages read out on screen.” It comes back to interaction: While streamers sometimes miss comments in chat, they’re sure to thank anyone who donates. Sometimes the donations are to get a reaction, like when a viewer drops 100 dollars or more at a time.

They’re not predictable, but given enough subscribers and viewers, a streamer can depend on a certain volume per hour, per stream, or per month. Both Narvaez and Leah are also making live appearances at conventions this month promoting their channels. They’ve held meet-ups for fans to come say hello and snap pictures. Both are a little uncomfortable with the term celebrity, even as they’ve had to sign autographs for fans that have potentially given them hundreds of dollars while watching them play.

And people who donate aren’t exceptions to the rule. That income is real, and when you break it down, a donation seems modest, when you consider that a few bucks per person is far cheaper than the price of, say, a concert or movie ticket, and often for more hours of entertainment. Leah sets her minimum amount at two British pounds (around three U.S. dollars), but Leah says currently the average tip amount is around 23 dollars.

If you look at Narvaez as a regular run-of-the-mill gamer, the “job” can be quite lucrative. “Sometimes I’ll have odd days where I’ll break a grand [like the first day] or I’ll be in the high hundreds,” he says, “but the consistency is in the low to mid hundreds.”

And big tips do happen, Leah says, especially in the midst of deep discussions in the chat section. “Big tips also happen during ‘tip trains’ where people want to keep the stream hype going.” 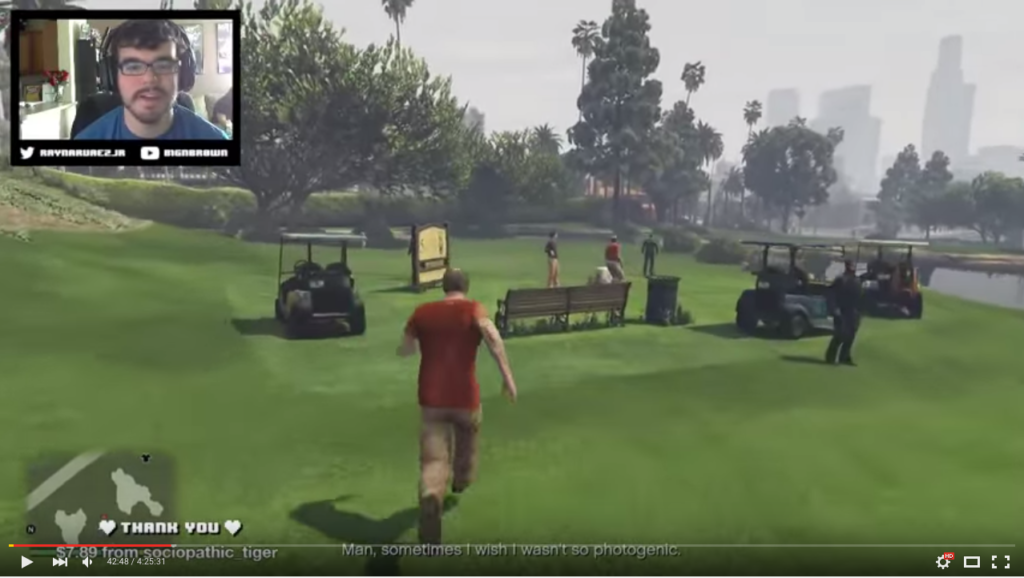 Narvaez says he gets a decent amount of donations from international viewers, especially if the gamer is willing to stream during off hours when those viewers would be watching live. According to Narvaez and Leah, other miscellaneous revenue streams include merchandise like T-shirts and other apparel or paraphernalia. Some people even have companies that sponsor them. Sponsors will pay certain streamers for endorsing a brand or to simply be associated with a popular face. There’s also YouTube, where streamers can upload their videos, however many don’t take advantage of it because it takes some time away from the actual streaming itself.

While ad revenue exists, it doesn’t really bring in that much money, unless you have a very high viewer count, “say 1000 or over for a full stream,” Leah says. Partners have the option to run adverts but have no control over the adverts themselves (outside of choosing the time they should run for: 30 seconds, one minute, two minutes, etc).” In her view, it’s more of a tool for pacing a stream, in case of emergency or other basic needs. Remember, most streamers are going for hours at a time. “Some partners (myself included) only run ads if we have to step away for a couple of minutes,” she says, “so that viewers don’t miss out on any actual content.”

The key to a livable income is making use of all avenues for revenue. What Leah and Narvaez have in common is an understanding that their viewers aren’t giving them money because of the game: They’re doing it for the personality. 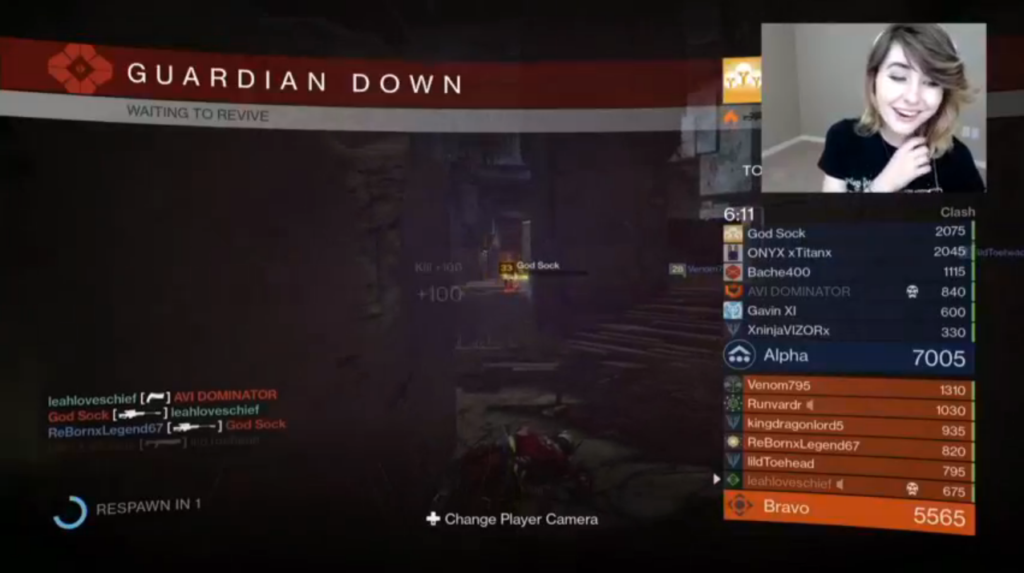 A recent stream from this month, which shows Leah playing the video game, Destiny.

When they do pay, they are paying for extras, since the content is technically free. Some fans will do more for publicity than income, some will be good for a few months of income and move on. But the more loyal fans you have, the more people you’ll have around. So for those who believe their calling lies in video game streaming, video streaming veterans say to follow these rules to monetize their joy: