Two iPhone models are available for pre-order, and so are other shiny gadgets. 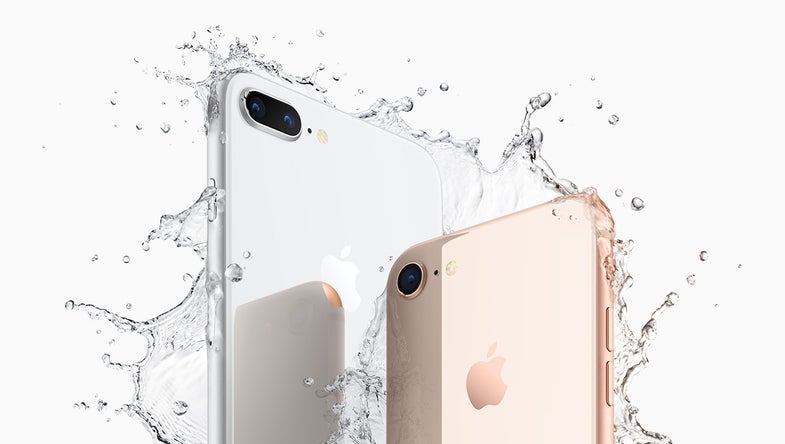 Like the iPhone 7, the iPhone 8 models are water- and dust-resistant, but it's up to you whether you want to take the plunge with them or not.
SHARE

The hullabaloo surrounding the iPhone X and its new Face ID feature may have overshadowed the other products that Apple announced on Tuesday, but the rest of the bunch are currently up for pre-order. Get out your wallets and take a tour of Apple’s shiny new offerings.

Want a new iPhone now, and feel like saving a couple hundred bucks by not purchasing the iPhone X? Apple skipped the iPhone 7s model name and went straight to 8. Like with the iPhone 7, one of the biggest considerations here is size. The 8 has a 4.7-inch screen while the 8 Plus has a 5.5-inch screen, which is great for looking at content but bad for skinny jeans. Both phones offer wireless charging, which is a first for the iPhone line, so that’s kind of historic. Other spec bumps include a bigger sensor for its camera (the Plus model has two cameras, like the 7 Plus did, to allow for a blur-the-background portrait-mode feature and optical zoom) and the company’s newest, faster chip to power it, which Apple calls the A11 Bionic.

The third-gen Apple Watch now supports cellular data—meaning you can make calls from your surfboard, or while out for a jog, even if your phone is at home. It also plays nice with Apple Music, and speaking of speakers, now Siri can talk to you out loud from it, too. The cellular version costs $399, as well as an extra $10 per month from your cellphone provider for data. The GPS-only version starts at $329.

Apple is now taking orders for the $179 Apple TV 4K. As the name suggests, it can crank out content at higher resolution and in HDR color. So, if you spent big money on your TV and you’re looking for things to show it off, the 4K HDR movies Apple will be offering for $20 in the App Store should do the trick when streamed from one of these little boxes.

There are already tons of wireless charging pads out there already, but Apple specifically namechecked two during the event. One from Belkin, and another from Mophie, are available for $59 each and are compatible with Apple’s 7.5w rapid-charging mode.