Squinting to hunt the last milliseconds of input lag. 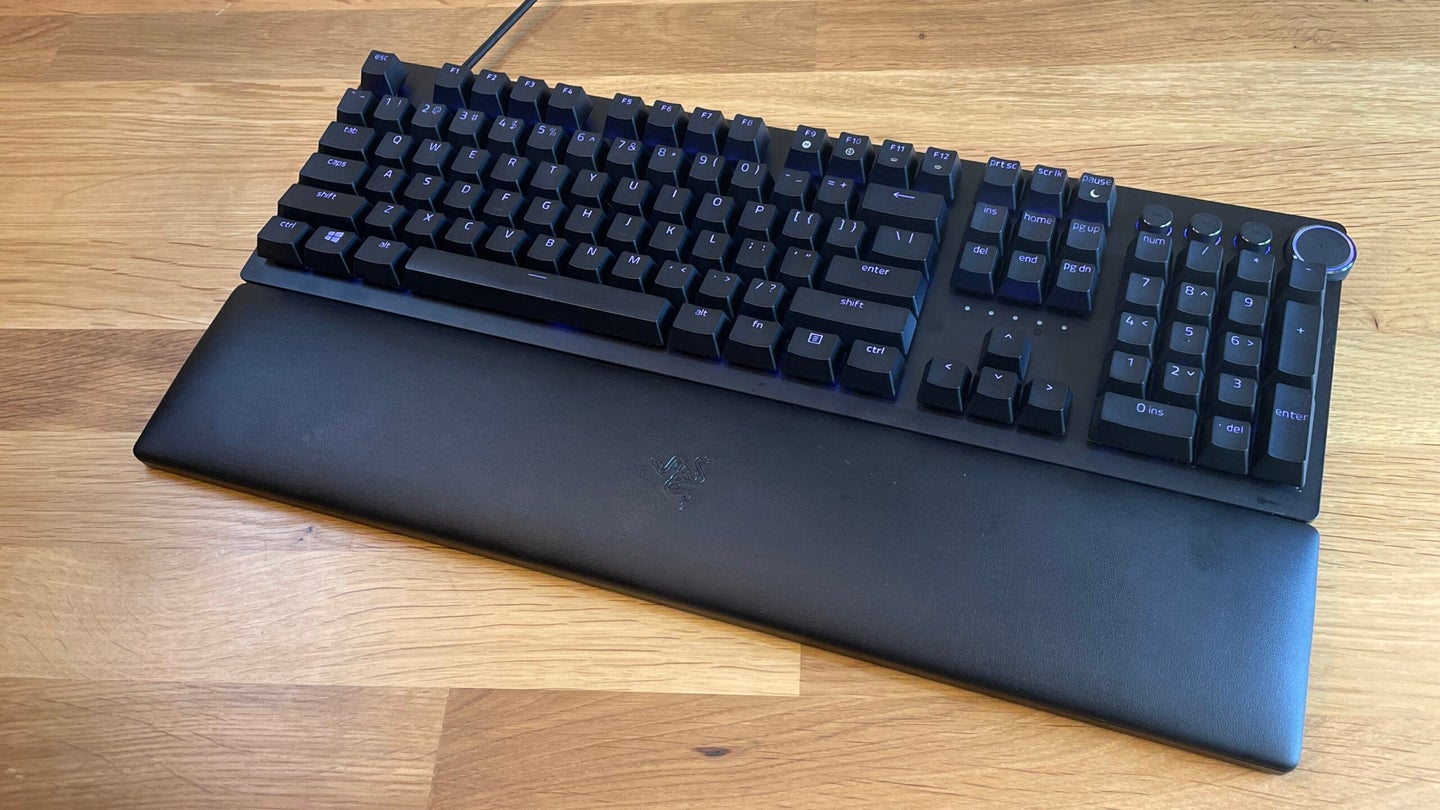 The Razer Huntsman V2 is, realistically, a tune up design. It updates Razer’s most popular keyboard with some features and design introduced in the keyboards the company made since the Huntsman Elite launched in 2018. In its full-size form, the Huntsman V2, adds a whole bunch of flashy little flourishes like 8K polling, which theoretically reduces input lag by increasing the number of times the keyboard communicates with your computer. The new release also adds PBT keycaps, and a redesigned wrist rest without any sharp plastic corners. None of these are essential improvements: In fact, they range from pleasant quality of life upgrades to borderline useless. Like Razer’s recently released mouse, the Basilisk V3, the Razer Huntsman V2 feels like a refresh that keeps the Huntsman current, rather than true innovation. While the Razer Huntsman V2 is a very nice gaming keyboard, and more worthy of its $200 price tag than the now three-year-old Huntsman Elite, there also isn’t anything here to get excited about.

Hunting down lag on the Razor Huntsman V2

Huntsman is Razer’s line of gaming keyboards with optical switches, an increasingly common alternative to mechanical keyboards, where pressing a key pushes down a panel that allows a laser to shine through and “actuate” the key, sending an input signal. Switching from mechanical switches to analog in keyboards and mice is the next phase in PC gaming peripheral makers’ never-ending war on input lag. Lag is the gap between when you press a key or button and when the resulting action occurs on your screen. It can make a big difference when playing certain games that require quick reaction times.

In this case, using analog switches cuts out a very, very slight gap introduced by mechanical keys called “debounce delay,” where the keyboard determines what signal to send to your computer. Analog switches do not introduce debounce delay, using an analog keyboard theoretically shaves a few milliseconds of lag off each keystroke.

A few milliseconds is not a lot of time, but that’s what’s left to shave in terms of input lag. There was a time when input lag was a serious concern for everyone, particularly when using wireless devices. At this point, most people would be hard-pressed to tell the difference in lag between mechanical and optical switches without special equipment. However, with the recent boom in esports gear, there is an emphasis in high performance, so cutting lag anywhere and everywhere remains a priority.

But that’s what was new in the original Huntsman Elite. The Razer Huntsman V2 doubles down on high performance features by adding the capacity to run at an extremely high (but not unprecedented) 8000Hz polling rate. Polling rate, a spec more commonly associated with mice, measures the maximum number of times a keyboard can send signals to a computer. The industry standard for keyboards and mice is 1000Hz, or 1000 signals per second. In the past, manufacturers have upped the ante to 2000Hz, but doing so showed no performance discernible improvements.

Earlier this year, a couple of companies, including Razer, introduced mice and keyboards 8000Hz polling. In mice, such as Razer’s Viper 8K, it can make cursor animation smoother and seemingly improves performance in reflex-driven actions, like a quick-draw gunfight in Call of Duty. Unlike mice, however, keyboards rarely put out a continuous signal, so increasing the number of inputs per second makes no perceivable difference in or out of games. It may shave a few microseconds off certain gaming actions, like stopping a dime when you release a movement key, only the absolute best players would need to pick a keyboard specifically for that kind of performance difference.

That begs the question, why add 8000Hz polling to a keyboard? Aside from the fact that it always looks better to make the numbers go up, the fact of the matter is that polling rate does improve things in some cases, and while no one has made a strong case for it in keyboards yet, it may become useful someday. In the Razer Huntsman V2, though, you can ignore it.

So what else is new, Razer Huntsman V2?

Setting aside its new 8000Hz polling, the Razer Huntsman V2 is largely a cosmetic refresh. Measuring 17.31 by 5.5 by 1.59 inches (WDH)–or 17.31 by 9.03 by 1.59 inches if you include the wrist rest–it’s a smoother, sleeker design than the elite. The new version features more durable Polybutylene Terephthalate (AKA PBT) keycaps, ensuring that the lettering on the caps never fades.

The best quality-of-life improvement, by far, is a new wrist rest with wall-to-wall padding. The old wrist rest design had a plastic bezel that stuck to your skin and had pointy corners: this one’s comfortable from every angle.

In a press briefing, Razer also emphasized that the Huntsman V2 features a layer of sound-dampening foam inside, which takes the edge off of the keys’ mechanical clack. For keyboard enthusiasts, the tone of mechanical keys while typing can be almost as important as the technical aspects of the keyboard, so putting in the dampener helps cultivate a more pleasing sound.

The new Huntsman also tosses a couple of features. The RGB light strip around the edge of the keyboard and wrist rest have been removed, so there’s no more underglow effect. The cable routing under the keyboard has been replaced by a simple cable coming out of the back-left corner, which may be annoying depending on your setup. Unlike the Basilisk V3, the Razer Huntsman V2 doesn’t come with a price drop. The full-size version still costs $189.99 for clicky optical keys and $199.99 for linear optical keys, so any loss of features, even little ones, feels like a step backwards. Despite that, I’d still recommend the Huntsman V2 over the Elite at this point for its increased durability and comfort.

Who Should Buy The Razer Huntsman V2?

If you’re looking for a Huntsman, the Razer V2 is realistically the right choice for most people. The more feature-rich Razer Huntsman V2 Analog has a more novel feature-set, but its signature feature, dual actuation, is only worth it for players who really like messing around with custom keyboard mapping.

The Huntsman Elite is still a great keyboard and likely worth getting over the V2 when retailers drop its price. Dollar for dollar, though, the Razer Huntsman V2 is the best construction and combination of features Razer’s put into a Huntsman. There are other notable optical keyboards, such as Corsair’s K100 RGB, but the Razer Huntsman remains the gold standard for this particular corner of the PC gaming universe.