Razer Edge Review: A Beautiful, Portable Gaming Gadget That You Won’t Take On The Go

The Razer Edge is a tablet with the guts of a gaming PC stuffed inside. That makes it plenty powerful, even if it ends up just sitting by your TV. 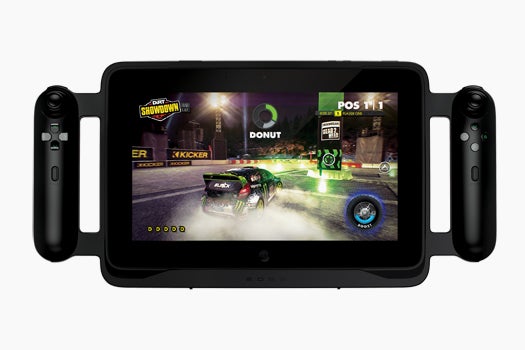 The market’s ready for something that is not a gaming PC but can act like a gaming PC. The idea of a Steam Box, a small gadget that can play PC games on your TV through the game-downloading service Steam, has been tossed around, but nothing’s come of it just yet. Why not? We have the technology to downsize a PC, right?

Enter the Razer Edge. It’s a 10.1-inch-display Windows 8 tablet with the power to play pretty much whatever PC game you’d want. You can hook it up through your TV, attach a controller-like accessory to the sides to play it on your lap, or sit it up on a stand in front of you. No matter what, it works great! Before you drop the nearly $1,500 or $1,000 for one of the versions of it, though, you just have to decide exactly how you’re planning on using it.

Have you used a tablet? Well, it’s that, first of all. It’s comparable to the Microsoft Surface but a little thicker and heavier. You probably won’t be able to easily hold it in one hand unless you are some kind of a giant. But it’s a tablet that you can use to play the latest games without it exploding from overexertion. You can download games through services like Steam or Origin or anything else you might use on your PC, then play those games through a mouse and keyboard or, if the game you download supports it, a controller.

There are basically three ways to use it:

PLAYING THROUGH YOUR TV

This is what you want. Using an HDMI cable and a stand (sold separately for $99.99), you can turn on Steam’s Big Picture option and connect to a controller, then play your game on the big screen. Voila: a console experience in tablet form.

If you want, of course, you don’t have to go through a TV: you can just set the Edge down on the stand and play through a keyboard or controller. That’s not a bad experience at all, even if it sort of feels like your PC just got compressed.

PLAYING THROUGH THE ATTACHABLE CONTROLLER

This is the most awkward way of playing it. If you shell out $250 for the Gamepad Controller, it becomes your controller and system all in one. But it’s not exactly a comfortable experience. Even though the controller–a solidly built sheath with control sticks reminiscent of fighter pilot controls–works fine, and even comes with a spare battery built right into the back, it’s tough to manage without balancing it on your knee. This made it difficult to do my usual sprawled-out, lying-on-my-back gaming position. I sat like a gentleman instead, with one leg draped over the other knee. Stop trying to fix my posture, Razer Edge.

USING IT AS A TABLET

If you’re buying the Razer Edge, you’re buying it for gaming. But it’s fast enough that you’ll have a fine tablet experience, too. You can stream a show on Netflix or do most anything else you’d want to do with your tablet, then download a game for your enjoyment. But again, it’s a little on the heavy side, so don’t expect to be exactly relaxed while you’re watching Arrested Development. 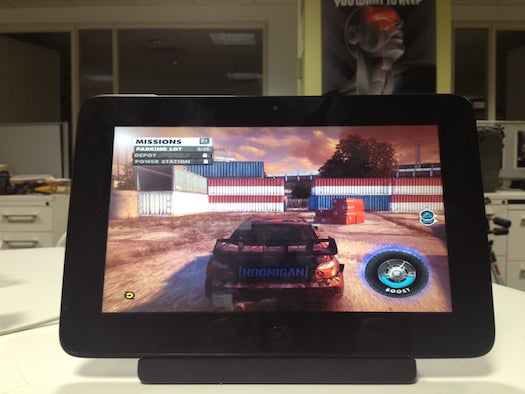 In general, it’s just a good idea. PC and console gaming has never really been able to go fully portable. There have been some great portable systems, sure, but those have never had anywhere near the same power as a full-size gaming rig. This does it, and that’s pretty amazing.

More importantly, it all comes together nicely. It’s a big, beefy thing, but it works great as advertised–in whatever mode you’re using it for–and if you’re on the market for both a tablet and a PC, and have got the dough, then that makes this a no-brainer.

Battery life is… not the best. But understandably not the best, for the amount of power this thing has, at least. You can get a few hours out of it; enough for your commute before you plug it in somewhere. The display is also a tiny bit on the washed-out side, but, I’d say, not going to affect your gaming too much. Then there’s the biggie: price. There are two models: a $1,449 and a $999, with two different processors (we tried out the more expensive Pro model).

I sort of question the portability of the Edge, too. Yes, I carried it around on the subway, which I couldn’t do with a PC. But it’s way too big to play anything comfortably in that situation.

SHOULD I BUY IT?

Look deep inside yourself and ask what you’re going to use this for. Hint: You’re probably not going to feel like carrying it everywhere with you. Which means it’s going to stay in your house. Are you in the market for a tablet that you can stick in front of your TV or on your desk to play games on, then retire with before bed? Then yeah, sure, if you’ve got the cash. But if you have a PC and/or console that you’re happy with, maybe reconsider.

That’s not to say it’s bad at all. It’s great! It really feels like the future: one gadget that works as a gaming PC and tablet. And they both work great. You just need to be in the market for both before you sign up.