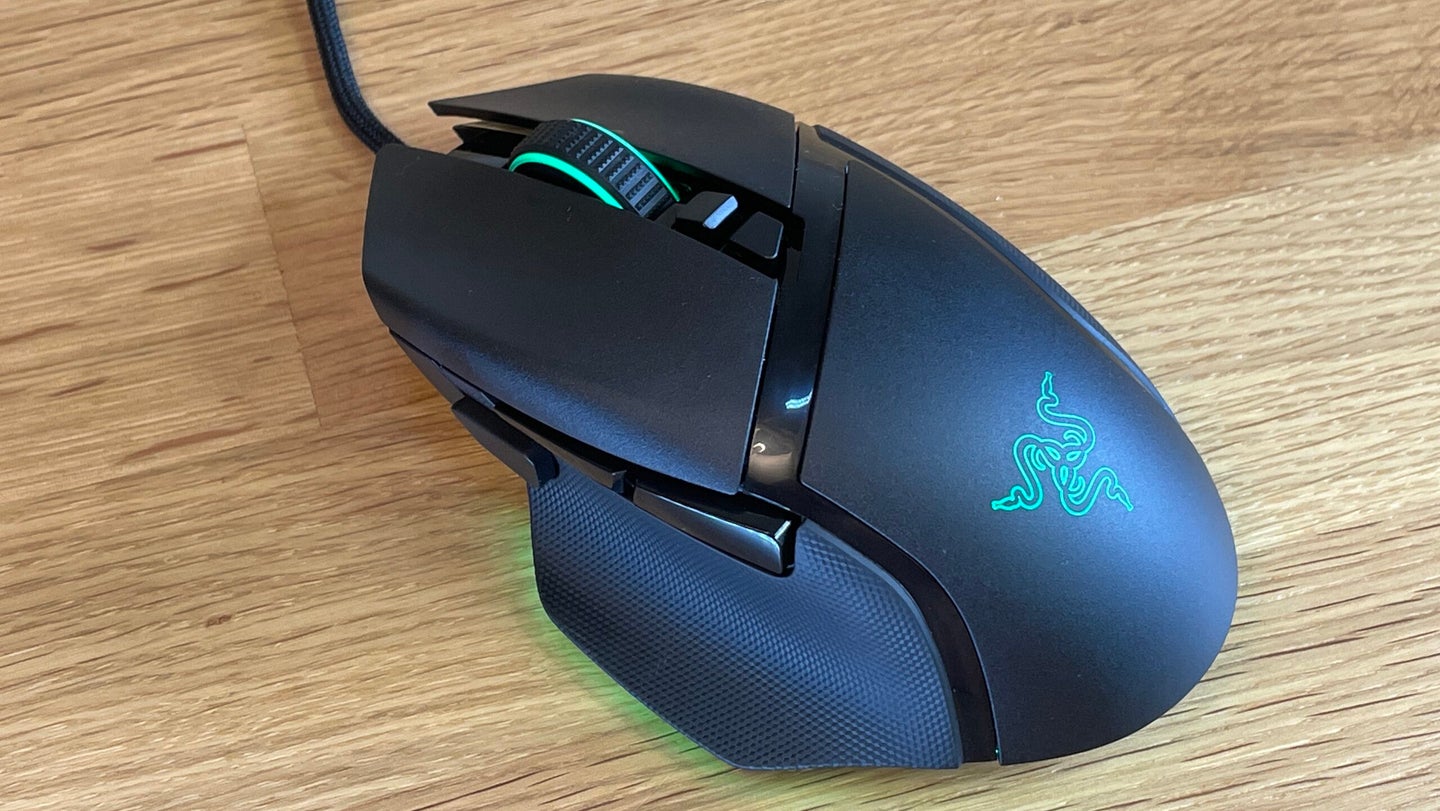 It’s that time again, PC gamers. Razer is releasing another Basilisk. This version, the Razer Basilisk V3, is the sixth version of the company’s beloved first-person shooter mouse since the original model was released in 2017. It seems like Razer’s never happier than when it’s playing with this mouse series: There have been high-end and budget versions, wired and wireless revisions, and a generational refresh.

In fairness, I generally feel the same way. The Basilisk is one of my favorite mouse designs: It’s comfortable, flashy, and offers a lot of useful buttons. Still, I don’t feel the need to try on every new fit. That may explain why Razer’s decided to call its newest version the “Basilisk V3” less than two years after releasing the “V2” in early 2020. The more versions you release, the harder it becomes to get people excited about new upgrades.

Despite the name, though, Razer Basilisk V3 doesn’t exactly feel like a complete overhaul. It has a handful of new features, including a scroll-wheel that can automatically switch from graduated turning to free-spinning, and a customizable RGB rim around its base. Meanwhile, it also streamlines the design in ways that allowed Razer to lower its price. Without any notable innovation, the Basilisk V3 isn’t going to convince anyone to move on from their old mouse, but it also maintains the Basilisk’s reputation as one of the most compelling mouse brands.

If you aren’t familiar with gaming mice, you may be surprised to hear that mice come in many flavors that extend beyond “gaming” and “productivity.” From its initial launch in 2017, the Basilisk was designed as a first-person shooter mouse. (“FPS mouse” for short).

First-person shooter mice are, realistically speaking, defined by two things: First, they usually have a thumb support, also known as a “thumb wing,” which holds your thumb in a place by the side of the mouse. Technically, the thumb wing exists to serve the other feature of the FPS mouse, the “sniper button,” which is placed to line up with the end of your thumb. Traditionally, the sniper button toggles a temporary DPI drop. Hold it down and your cursor tracking drops to a much finer movement, which allows for careful aiming. It’s particularly handy for situations such as lining up a headshot while sniping.

In practice, I’ve found that the thumb wing, not the sniper button, is the FPS’ mouse’s legacy. Over the years I’ve tested many gaming mice that have adopted the thumb rest without the button. I wouldn’t call it an FPS mouse without both components, though. Genre-specific mice aren’t as popular as they once were, but this form factor, and the Basilisk specifically, have endured.

Razer Basilisk V3: Back to Basilisks

For gaming mouse lovers, the Razer Basilisk is a fairly well-known quantity. This one’s wired 11-button right-handed mouse with a “thumb wing” support that keeps your digit from dragging on your mousepad even if you don’t grab it tight. It measures 2.97 x 5.19 x 1.56 inches (WDH), slightly larger than the 2019 Basilisk Ultimate, and weighs 3.67 ounces, which is notably heavier than the Basilisk V2.

The best aspect of the Basilisk V3 is the thing that Razer never changes—its shape. It’s high-humped base and curved click panel guides your hand into a very comfortable position that allows your hand to drape over the mouse. Propped up by the support, your thumb slides into position right over the new, non-removable trigger. Whether or not you need all the gaming-focused bells and whistles, the Basilisk V3 (and all of its predecessors) are excellent general-use mice.

As I mentioned, the Basilisk V3 has 11 buttons. On top, you’ll see two click panels, a scroll wheel, and two buttons in the center column just underneath it. The wheel actually accounts for three “buttons:” Like all mice, the wheel’s clickable, but you can also tilt it left or right to scroll horizontally. All 11 inputs can be remapped using Razer’s Synapse configuration app.

The tilting scroll wheel, which was added with the Basilisk Ultimate in 2019, is more versatile than you might think. It’s extremely easy to tap the wheel to either side, but not so easy that it’s prone to misclicks. In games, it’s a great fit for secondary fire, cycling through weapons or controllable units, or other important functions. Outside of games, it’s great for hotkeys like opening tabs or refreshing a page in Chrome.

Back to the buttons: On the left side of the mouse, you have the usual “back” and “forward” side buttons and the so-called “sniper” button at the front, waiting for the tip of your thumb. Last but not least, if you flip the mouse over, there’s a button on the underside of the mouse for switching among the Basilisk V3’s five onboard profiles. Putting the profile swap button underneath the mouse is an esports-friendly choice: Competitive players prefer not to have the ability to accidentally reset all their buttons mid-match.

The Razer Basilisk’s V3’s new features are, by-and-large, minor upgrades. The most significant of them is a redesigned scroll wheel that allows for “notched” scrolling with tactile feedback and a frictionless free scroll. You can change between them using one of the top mouse buttons, but the mouse can also do it for you through“smart-reel,” a software-enabled feature that will automatically switch between the two modes depending on how far you scroll. While it isn’t a game-changer, I have to admit it’s very cool to feel the scroll wheel change modes. There’s a very distinct “magnetizing” sensation you can feel when the mouse tightens from free to tactile scrolling.

The second really substantial addition to the Razer Basilisk V3 is a heaping helping of Razer’s signature RGB lighting. In addition to the usual piping on the scroll wheel and light-up logo in the palm, the Basilisk V3 has an RGB light that goes all the way around the base of the mouse, which creates a reflective underglow effect on your mousepad or whatever surface you’ve got it on. While it is a single lighting element, the rim is customizable in nine places, so there’s a lot you can do if you like tinkering with RGB patterns.

Updating the sensor and mouse switches

Though it may be tough to detect the difference (even by reading the box), the Basilisk V3 features slightly upgraded mechanical components. It uses a new version of Razer’s premium Focus+ sensor, which upgrades the maximum DPI from 25,000 to 26,000. The new Basilisk also sports Razer’s “Gen 2” optical mouse switches, which have been in Razer mice released earlier this year, but not a Basilisk. In both cases, these changes bring the Basilisk up to speed with Razer’s other mouse lines, but don’t lead to any kind of meaningful upgrade.

Stock up, stock down

Out of all the changes in the Basilisk, the most meaningful may be the price. With the V3, Razer has lowered the base price of the Basilisk from $79.99 to $69.99. At a glance, that makes it easier to get one of the best gaming mice for less. On closer inspection, though, it’s hard to argue that you wouldn’t be better off skipping out on the relatively granular upgrades in the Basilisk V3 spending less on the now-dated Basilisk V2, which is currently down to $49.99 on Amazon. That, by the way, is why the Basilisk V3 exists. In a world where Amazon continually drops prices to meet demand, there’s good reason to keep creating new versions of gear, whether or not they actually push the envelope.

Who should buy the Razer Basilisk V3?

I think everyone who’s confused about what mouse to buy should at least consider buying a Razer Basilisk. I’m partial to the $169.99 Basilisk Ultimate, which is wireless and comes with a unique and very functional wireless charging dock. For most people, any of the standard Basilisks or even the older Basilisk Essential is likely fine. The fact is, while I appreciate the finer points of the new and/or more expensive versions, it’s the core design that makes it an all-time great gaming mouse line. It’s okay to be enticed by all the bells and whistles, but a smart shopper should also be aware of the differences between frivolous features and the revolutionary ones.