This Fossil Gen 5 smartwatch offers the look of a more traditional timepiece with the bells and whistles of a smartwatch. 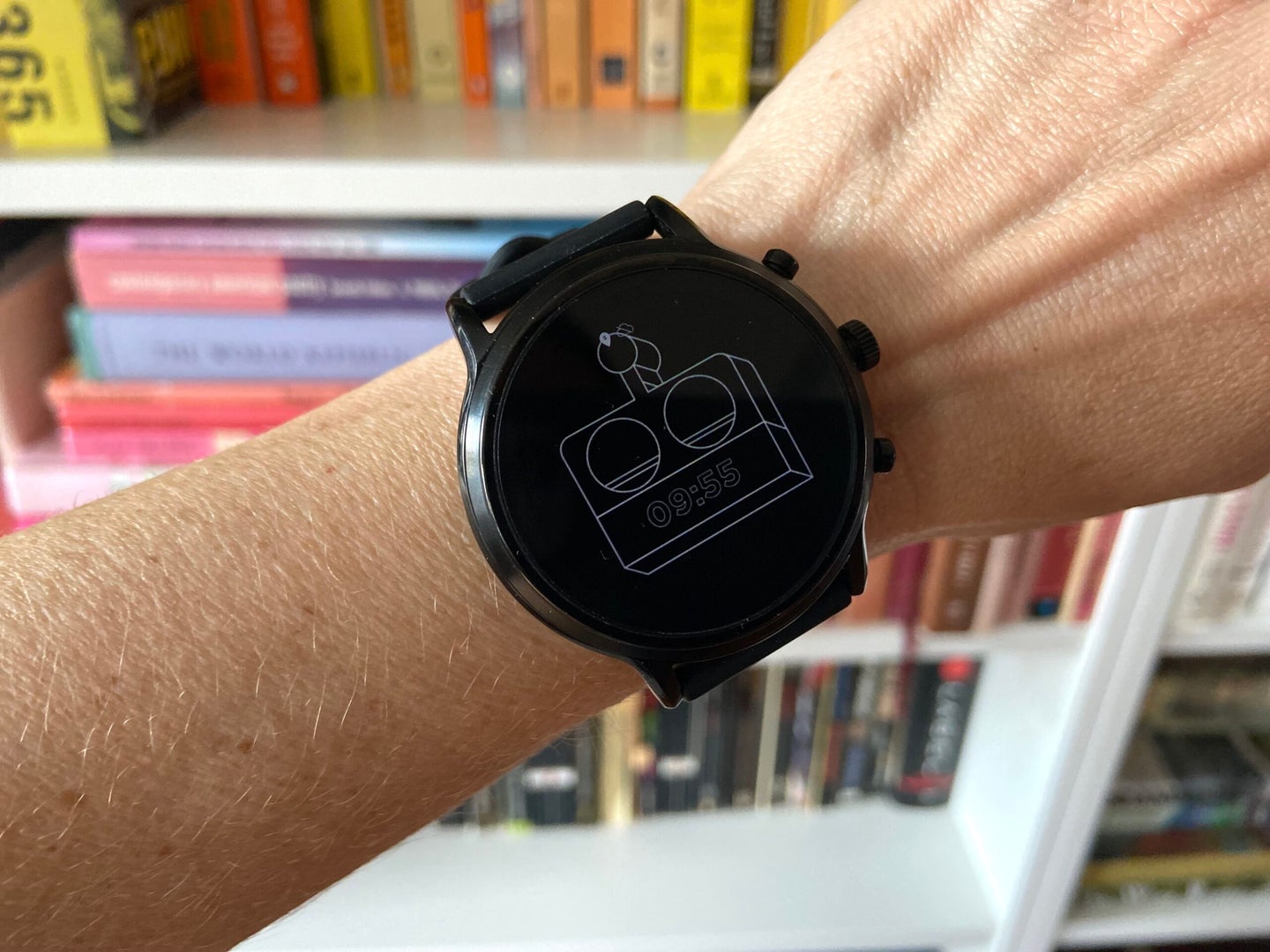 The Fossil Gen 5 Carlyle HR smartwatch could pass for analog from afar, but up close it's data-rich. Erin Behan
SHARE

The Fossil Gen 5 Carlyle HR doesn’t scream out smartwatch. Its round face sports a trio of tactile crowns on the right-hand side. Combine that with one of Fossil’s classic bands and it could almost pass for analog. Despite its classic look, this Wear OS by Google-powered device does everything you’d expect from a full-featured smartwatch.

What is the Fossil Gen 5 Carlyle HR?

At about $199, The Fossil Gen 5 Carlyle HR promises a robust set of features in an understated package. As the Fossil watch’s name suggests, this is the fifth iteration of the wearable. The generational upgrades include an improved battery life, which can reach more than a full day in one of the watch’s low-power modes. It also recharges quickly, gaining a nearly full charge in less than an hour.

Unlike previous Fossil watch hybrid models, there’s a speaker, which allows a user with a smartphone to answer tethered calls and hear what Google Assistant has to say. It also comes with a larger 8GB of storage, good for those interested in downloading compatible apps.

What makes it tick, of course, is Wear OS by Google, which currently allows for life and fitness tracking, calendar syncing, access to Google Assistant and Google Pay, notifications from your smartphone apps, GPS tracker, and more.

Right out of its classic watch-style box, the Fossil Gen 5 smartwatch is easy to set up and simple to use. Visually, it’s a good-looking smartwatch, one that hews close to analog watches. I had multiple friends express surprise that it was a smartwatch due to its more traditional round clock face.

Like many of today’s smartwatches, it’s water-resistant up to 3 ATM and I showered while wearing it several times without incident—and, taking things beyond the bathroom, it counts swim-tracking among its talents. Its 8GB of memory makes it comparable to the Apple Watch Series 3 and the best Fossil smartwatch for memory. However, it feels slightly outdated compared to other models like the Apple Watch 6, which offers 32GB storage.

The handiest features of the Fossil Gen 5 smartwatch are the seamless feeding of the info you likely use most often on your smartphone right to your wrist—with updates signaled via a gentle vibration. Any calendar updates, text messages, app updates, the weather, mapping info, and phone calls show up with a flick of your wrist via Wear OS by Google. The 1.28-inch AMOLED screen that displays all this data is bright and colorful; its 416 x 416, 328ppi resolution is high enough to render graphics with crsp definition.

On the connectivity front, you get Bluetooth 4.2 LE, GPS, NFC, and WiFi. The touchscreen includes seemingly intuitive swiping up, down, left, and right. The three crowns/buttons on the right of the watch allow easy access to all your apps, including Google Pay, your agenda, and alarm, etc.

There’s a lot going for the Fossil Gen 5 smartwatch, and it’s not all smooth sailing. It took me a while to get acquainted with the interface and I’d often find myself swiping and clicking around to remember where settings and items were located (or simply googling how to do something if I felt truly lost).

For those tracking movements and workouts, the untethered, internal GPS tracker comes in handy. And the heart rate monitor helps give a better look at your health through its fitness tracker. You can track your fitness and goals either with the Wear OS by Google options or through a third-party downloaded workout app, which will appeal to anyone who wants to exercise and leave their phone behind. I took my watch on a walk through the woods in Upstate New York where it recorded similar stats as a friend’s Apple Watch, also on the hike.

The included fitness apps did a solid job tracking my activity, from steps to indoor and outdoor workouts, but dedicated fitness gurus may want to download a different app for greater access to data crunching. The step tracker is automatic and accessible right from the home screen—it proved an extra fun addition to my trip to NYC, where it’s easy to take 10,000 steps before lunch.

Heavy use on the Fossil Gen 5 resulted in needing to charge midday, but most days I sailed through to mid-evening before the watch automatically went into battery-saving mode. That’s fine for passive users, but slightly disappointing if you plan on regularly using the smartwatch features a lot every day.

The biggest downside for me, since I paired it with an iPhone running iOS, is that while I can read text messages sent to my phone, I can’t reply to them on the watch itself.

Easy setup with a little hiccup

Initial setup for the Fossil Gen 5 was fairly easy, but it requires multiple steps and demands your attention during the process. If you’ve ever gone through the seamless Apple Watch setup, it will feel arduous.

After successfully pairing with my phone, I had a day of smooth sailing until I disconnected the watch from my phone to connect with my car’s Bluetooth (another hassle of multiple devices with connectivity). For reasons I still don’t understand, in order to reconnect my watch to the phone, I had to do a hard restart of the watch and re-pair it with my phone. That said, once it paired for a second time, it worked without a hitch.

Good look and durability, too

The Fossil Gen 5 is a smart-looking watch that by all accounts feels like it could take some abuse (or simply a shower) without any signs of wear and full functionality. The screen itself is big enough to get a good read on the data coming in. On a slim wrist, it looks a touch oversized, but nothing out of the ordinary in today’s larger smartwatch landscape. And when it’s time to recharge, the watch easily snaps to the USB magnetic charger and even rotates while juicing back up.

Wear OS by Google works with both Android 6.0+ and iOS 12.0+, meaning most smartphone users will be able to use the Fossil Gen 5. The available 1GB RAM and 8GB storage should be sufficient for most users, but don’t expect it to provide the speediest smartwatch experience around.

The loudspeaker and microphone mean you can conduct phone calls and use Google Assistant, though you shouldn’t expect to rely on it all the time. Google Assistant didn’t always pick up on my voice or exactly what I was saying when it did hear me. The built-in speaker is a nice touch for when you’re not wearing headphones, but its tiny size limits how loud and clear it can really be.

Vibration alerts are unobtrusive. In addition, I used Theater Mode to keep the screen off when I didn’t want to be disturbed (including during an actual movie outing) and found it an easy-to-use helpful feature.

So, who should buy the Fossil Gen 5?

The Fossil Gen 5 Carlyle HR works well for those looking for a mid-priced smartwatch that does most of what you want a smartwatch to do. The display is easy to read (with the brightness adjustable) and the interface is generally intuitive after a bit of messing around. It will likely please those looking to quickly access important data on their wrist without having to open and mess with their phone.

Likewise, those interested in using a smartwatch to track fitness and activity levels won’t have any complaints about the ease of use, although they may want to go beyond the basic Wear OS by Google fitness apps and download an external app via the Google Play store. Extensive watch use may wear the battery down, but making smart use of its battery-saving options will likely keep it operational for a full day of use. Or just charge it up for an hour and get back to using it full tilt. Plus, this Fossil Gen 5 smartwatch is attractive—and when you’re wearing your computer on the wrist that’s no small thing.

Erin Behan is a writer and editor based in Portland, Ore. For Popular Science, she reviews everyday electronic devices and tests them on her small brood of children (one teen and one grade-schooler) and pets (one very gregarious cat). She writes and edits for a variety of online publications and companies on a range of topics, including real estate investing, sportswear, home insurance, and food. For fun, she likes running in the PNW rain, practicing yoga at home, visiting friends in far-flung locales, and getting out into nature. She recently bought a 100-year-old house, which both terrifies and excites her.