All the hardware from today's event 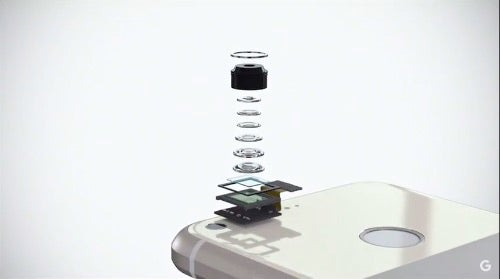 For the last six years, Google‘s Nexus phones have represented (or at least tried to) the platonic ideal of what Google thought an Android user’s experience could be. The California company partnered with hardware manufacturers such as HTC, Samsung, Motorola, LG, and others to build the hardware, and the software would be “pure Google.” Phones would typically launch alongside a big update to the Android OS, and so users got the unadulterated experience, free of third-party skins.

Well, as of today, the Nexus program has been usurped. In its place, Google has just launched the Pixel and Pixel XL, two phones bearing drool-worthy specs. The hardware itself was built by HTC (which made the original Nexus One, so it’s somewhat poetic), and it looks solid, if a bit iPhone-ish.

The phones themselves are very similar to each other; they just come in small and large. Well, medium and large. Both phones have the new Snapdragon 821 processor for brains and a beefy 4GB of RAM. The Pixel will have a 5-inch 1080 x 1920 display, whereas the Pixel XL will have a 5.5-inch 1440 x 2560 display. The Pixel has a decent-sized 2770 mAh battery and the XL has a beefier 3450mAh battery.

The phone’s case is made of solid aluminum, with has a section in the back made of glass. On the back there is the fingerprint scanner that debuted with the last round of Nexus phones. I actually think it’s a way more natural place for a scanner than the front bottom, a la iPhone and Samsung Galaxy phones. There’s also no camera bump, Google was quick to mention.

The camera is the banner feature of these phones. The Pixel has a 12.3-megapixel camera, built to allow in more light. Pixel received a rating of 89 from Dxo Mark, which ranks camera quality. To put it in context, the iPhone 7 got an 86. This makes Pixel the highest-rated phone camera ever.

It has smart bursts, which allow you to hold the shutter down to take a stream of stills, and then Google’s software picks the clearest shot for you. Google claims the camera has a faster capture time than any other phone camera, as well as zero shutter lag and advanced HDR photos. There’s also some serious stabilization for the video. It sounds like it’s electronic, not mechanical, but the example Google showed looked really good. Google is also giving away free unlimited full-resolution storage (4K video and all) on Google Photos for Pixel owners.

Pixel will be the first phone with the new Google Assistant built in. Which we’ll get to in a second. It has Google’s new video chat Duo, built in. It’s also the first to have 24/7 customer care, via phone or chat, and you can easily share your screen with your service rep. Google also built a new tool that should make it easy to migrate from an iPhone, should you be changing teams. It’ll transfer texts, photos, and a more. It’s also the first phone that will work with Google’s new virtual reality system: Daydream. And those who pre-order a Pixel phone will get a complimentary Daydream VR headset.

Pixel will be available in black, silver, and blue (for a limited time). It starts at $650, though an installment plan is available. It’ll work with Project Fi, Verizon, and of course you can get it unlocked to it will work on AT&T, T-Mobile, or international carriers. Pre-orders start today, but we haven’t heard about the shipping date yet.

Sundar Pichai says the world is shifting from a mobile world to an A.I. (artificial intelligence) world. Which is both cool and kinda scary. To get ready for that world, today Google is officially taking the lid off of Google Assistant.

You can ask it things like, “Okay Google, what do I have to do today?” If you have a lunch planned, you can ask it for good restaurants in the area, and even to book you a table. The more you use it, the more it knows about you, and the more helpful it can be, theoretically. This, of course, means sharing more and more of your data with Google. A lot of us have already gone pretty far down that rabbit hole, but others may be spooked, and perhaps rightfully so.

In the last two years, Google’s machine learning has gone from roughly 89 to 93 percent accurate, says Pichai. Four percent doesn’t sound like much, but it represents computers taking critical steps toward thinking more like a human.

Assistant is finally rolling out, both on your phone and in your home. On your phone you just touch and hold the home button (or say the hot word), and you can ask your phone for info to to help with tasks. You can say, “Show me my photos from last October,” and it will pull up your shots from Google Photos. It can also tap into Google’s Knowledge Graph to get you info about concerts, movies, and such. You can use it to send texts, via a number of different apps and services). You can ask it how close your chosen restaurant is to a concert venue you’re going to, and it can book you a table, too.

The Daydream View virtual reality headset looks not entirely unlike the Samsung Gear VR in shape, but the materials are very different. It’s made of soft fabrics, and looks more like a piece of clothing than a face helmet. I could almost imagine drifting off to sleep in it. It’s cushioned, it’s 30 percent lighter than competitors (i.e. Gear VR), and it works even if you’re wearing glasses. You just drop your phone into the pouch, close the latch, and it should work. It’ll auto-align to make sure you seeing what you’re supposed to see.

There’s also a controller. It has a couple buttons, a touchpad, and motion sensors. The controller can even live inside the Daydream View, so you don’t lose it when you aren’t using it. Clever.

At launch it will come in slate gray, but later it will also come in “snow” and “crimson.”

Google has been partnering with a bunch of companies to develop experiences for Daydream. JK Rowling’s Fantastic Beasts and Where to Find Them game looks really cool (you’re a wizard and the controller is your magic wand). There’s also Starchart, which is basically a planetarium for your face (the remote control becomes the pointer, and constellations light up with info when you point at them). Gunjack (from the makers of Eve) looks like a killer space shoot ’em up game. By the end of the year more than 50 partners will be bringing content to daydream.

But Google isn’t purely relying on partners. Daydream View will also work with Google Play Movies, YouTube, StreetView, and Google Photos. Google created VR tours of dozens of historical locations. With YouTube, you can watch videos like they were on a big screen, but if the video is 360- or VR-enabled it should be a fully emersive experience. This is leaps and bounds ahead of where Google Cardboard left off. Google claims that there are “hundreds of thousands” of immersive videos on YouTube, though I wonder what qualifies as immersive.

Daydream and the controller will come bundled together in November and will cost $80. Not bad at all.

Jumping off of its partnership with Asus for its OnHub router last year, Google is now launching Google Wi-Fi, a smart, multi-point router system. Essentially, you can put multiple routers around your house as needed, and Google will intelligently manage which router you should be connecting to. Setup is all done via app.

Preorders start in November, and it ships in December. A single unit is $130, or for larger homes, you can get a three-pack for $300.

Chromecast, Google’s streaming dongle, will now support 4K, HDR video, and Dolby Vision with the Chromecast Ultra. It’s 1.8x faster, and it has an Ethernet port now. It will stream 4K videos from YouTube, and Google Play Movies will be adding 4K options in the month to come. The new Chromecast Ultra will go for $70.

This is where Google Assistant comes home. It’s essentially Google’s version of Amazon’s Echo, and it sounds way more useful. You can play music, manage tasks, get search answers from Google, and even manage connected gadgets.

It has a sleek, modern look. The top of the Home is a capacitive touchscreen, so you can do some manual adjustments, too, when you don’t feel like talking to it. It has multiple mics to separate voices from ambient noise, which should boost the quality of speech recognition. There’s a mute button, for when you don’t want it listening in, an it has a decent looking speaker inside, too.

Some examples of how to use it. You can just walk in your door and say, “Okay Google, play Malibu by Anderson Paak, “ and it should, though YouTube, Pandora, Spotify Google Play, or several others, depending on your preference, and it will remember which is your go-to music service. You can also ask it more complex questions like, “Play the Shakira song from Zootopia.” That’s pretty crazy. It can also play news and podcasts. It can also support Casting from your phone, which gives you even more options.

When Knowledge Graph doesn’t have an answer to your question it will use snippets from websites such as Wikipedia and other popular websites to give you a quick answer out loud. It also taps into Google’s knowledge of realtime data, so it knows how much traffic lies between you and where your next appointment is. You can ask how long it will take to bike there instead if you like.

If you choose to give Assistant access to your person info (calendar, etc), you can get a daily briefing when you wake up. You can have Home add things to your shopping list, then when you’re at the grocery store, pull out your phone and say, “Show me my shopping list,” and it will pop up, because it’s all the same Assistant. Slick, if it works as advertised. We’re watching a canned demo here in San Francisco,

At launch it will work with Nest, Philips Hue, IFTTT, and Samsung, so you can control your home’s smart objects. It will also integrate with Chromecast, so you can have it play videos, TV, movies, and music just by asking for it. You can also use voice to pause and play. Just say, “Okay Google, watch videos of Dave Chappelle on my TV,” and it should start playing. Netflix will soon support voice casting as well. It will work with Google Photos, too. “Okay Google, show photos from Rowan’s bachelor party on my TV.” Or it can use Google’s image recognition. “Show photos of sunsets,” and all your sunset pics will pop up, even if they aren’t tagged that way.

If you wanted to put Homes in a bunch of different rooms they should work together, a la Sonos, and have you music synced in every room. Whichever device hears you best, only that one will respond, so people in the livingroom won’t hear your conversation with Home when you’re in your bedroom.

Home will be available at $130 and will come with a free six month trial of YouTube Red. Pre-order starts today and it will begin shipping and appearing in retail stores November 4th. It will come in seven different colors, so it should match your shag carpeting perfectly.