Washable heartbeat sensors can now be embroidered onto clothing 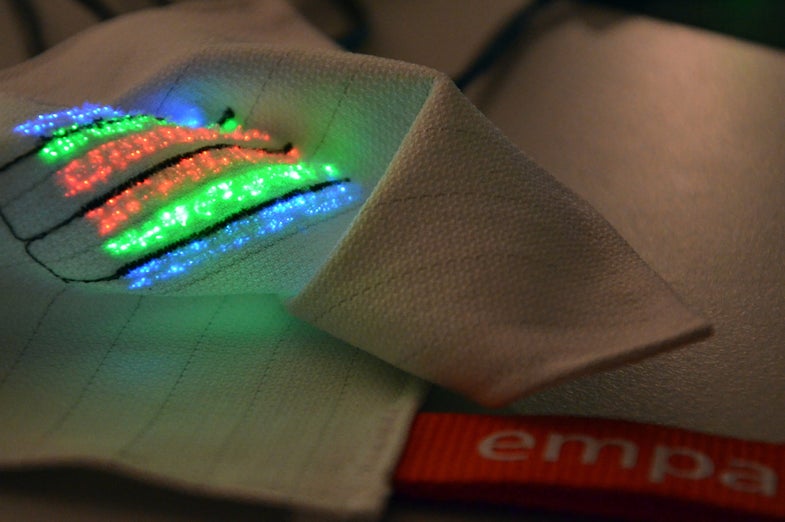 Embroidery is usually used to adorn fabric with festive designs, but it can now be used to measure heart rates too.

In a new study published in the Journal of the Royal Society Interface, researchers unveiled a fiber optic material that can be produced quickly and then woven, knit, or embroidered into existing fabrics, forming flexible, wearable sensors that seamlessly integrate into clothes.

“From the side of our medical partners, that’s the first thing that they ask us,” says Luciano Boesel, a researcher at Swiss Federal Laboratories for Materials Science and Technology, Dübendorf (EMPA). Having clothing be washable is vitally important in a healthcare setting like a hospital or rehabilitation facility, where people are injured or sick, and susceptible to catching other diseases.

This particular study is part of a larger project that Boesel and colleagues are working on, with the ultimate goal of developing sensors that can monitor health signs in paraplegic patients, who often run into problems with traditional sensors which can rub against the skin and eventually form sores.

The group, including Brit Maike Quandt—first author of the paper, and also a researcher at EMPA—hopes that new, all-textile sensors will provide a non-invasive window into what’s happening inside the body without causing any additional discomfort to patients.

“It can give feedback to clinicians that can evaluate that data and improve the treatment plan for paraplegic patients,” Quandt says.

Two different materials (both polymers) are melt-spun into a fiber optic thread. One polymer is a coating, and inside is a different fiber optic polymer that can transmit light over long distances. The materials had to be chosen very carefully. “Materials that are good for melt spinning aren’t usually good for optical fibers,” Boesel says.

But there are distinct advantages to going with this specific production method. Melt-spinning involves melting down the materials for the thread, then spinning them out into the desired shape and size. This method can produce over 1300 feet of fiber per minute. The more popular form of creating fiber optic threads is fiber-drawing, a process that can only produce around 100 feet per minute.

The thread, durable enough to stand up to the strict washing regimens of hospitals, is then ready to be fashioned into a sensor.

The researchers embroidered their prototype into a piece of fabric typically used in healthcare settings. Bends in the thread allowed light from an LED to escape the fiber and travel into the skin. The reflection of that light off a person’s pulse is registered by a detector embroidered with the same type of threads.

They placed their sensor into a simple knit hat, laying it along the forehead.

The researchers measured heart rate through the sensor in the hat and compared it to conventional heartbeat sensors worn on a fingertip. They found that both sensors had similar readings.

Not only is it accurate, it’s also comfortable. In friction tests, where the sensor was dragged against replicas of dry and sweaty skin, the textile sensor was found to produce less friction (a frequent cause of discomfort) than conventional bedsheets.

While this version of sensor only looks at heartbeat, the project includes efforts to create a whole suite of sensors, including ones to track oxygen levels and pressure in tissues. And one day they might even make it out of the hospital and into your workout gear.