The Fitbit Versa 3 is the modern workout enthusiast’s not-so-secret weapon. 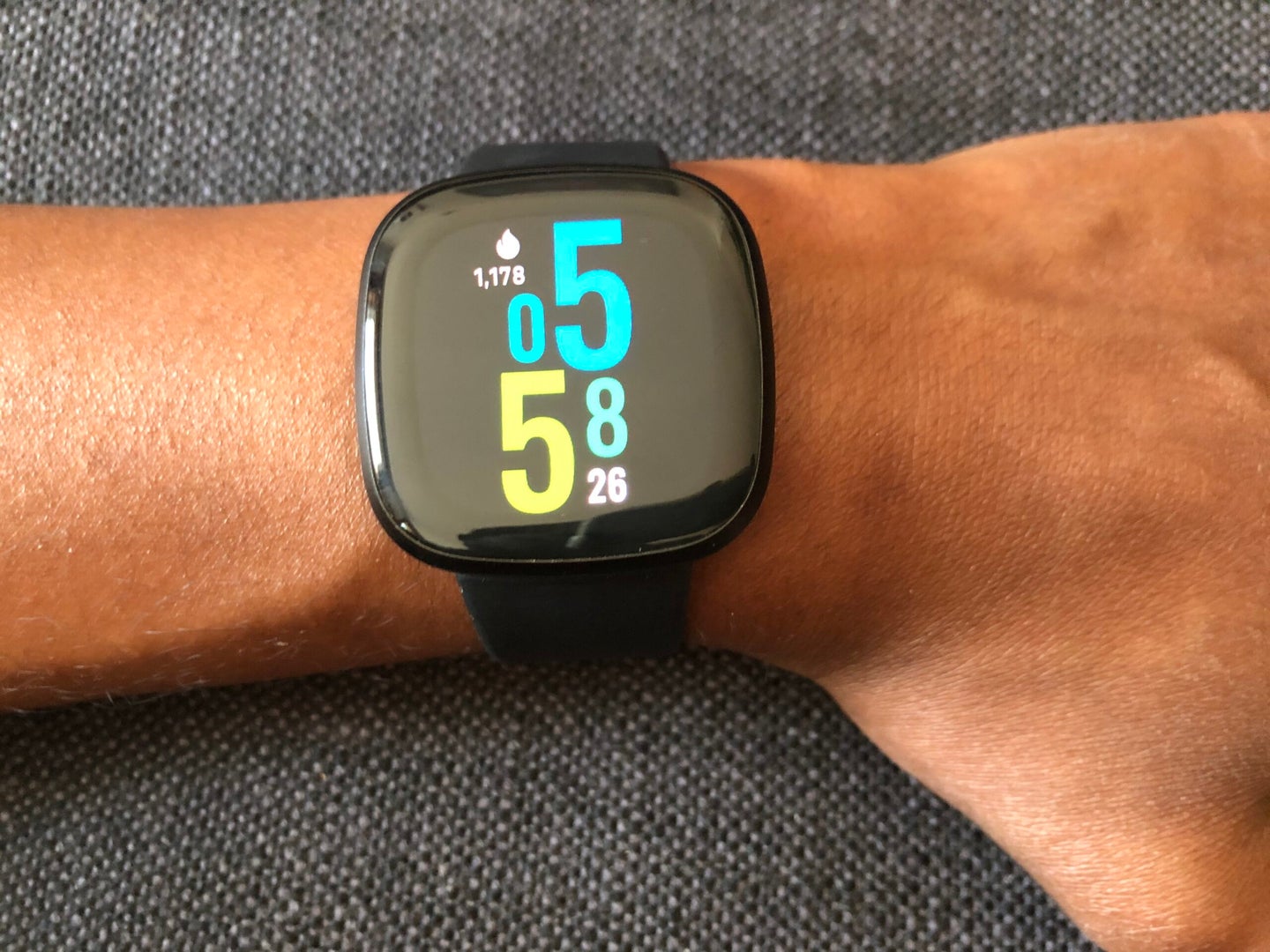 There are seemingly endless approaches if you’re looking to track your health and fitness. Smartphones can automatically measure your movement via apps and accelerometers, which give you basic data, but you may not keep your phone on you at all times. This is one of the reasons smartwatch fitness trackers and activity monitors have become so popular: These little wrist computers act as intermediaries between body and phone, collecting a wealth of information on your health and habits as you move through life. And the Fitbit Versa 3 perfectly fits in with but also stands out among the crowd, monitoring heart rate, calorie-burning, blood oxygen levels, step tracker, and more without losing the visual appeal of a smartwatch.

The Versa 3 is the latest in the Versa smartwatch series and falls between the Versa 2 and the more pricey and advanced Sense—placing it as one of the best Fitbit watches to transition from office to extracurriculars. Evolutionary more than revolutionary, it’s a step up from the previous Versa generation in that it has a larger 1.58-inch, 336 x 336 resolution display (an increase from the 1.39-inch, 300 x 300 screen in the Versa 2) that offers sharp viewing angles without weighing more. It also charges faster, has a longer battery life, and incorporates additional sensors. To name a few new features the platform supports, the Versa 3 has GPS, measures Active Zone Minutes (time spent burning fat or in full cardio mode) when you’re at the gym. Out on the street, it allows you to make purchases by tapping your smartwatch to card readers (setting up Fitbit Pay required). Its integrated microphone/speaker allows you to take calls directly from your wrist and interact with Amazon Alexa or Google Assistant (over Bluetooth when paired with a smartphone).

The design of the 40mm aluminum case is also sleeker than that of its 39mm predecessor’s, in that it doesn’t have a visible button on its side. Both generations of the Versa are more rounded than the Apple Watch and therefore look more like regular digital watches than an industrial flavor of smartwatch. This is a plus if you’re looking for subtlety, and an accessory you wear nearly 24 hours a day ought to look subtle.

Getting Started With the Fitbit Versa 3

I took the Fitbit Versa 3 out of its box and was immediately surprised by how attractive it is. Other activity monitors I’d seen were either bulky, unwieldy, or less advanced bracelet-style trackers like Fitbit’s own Charge. Along with the softer, more contemporary lines of the Versa 3 body, I found the full black “infinity band” that is included to be aesthetically pleasing, though Fitbit sells many Versa 3 bands for those looking for something more fashion-forward, featuring brands such as Victor Glemaud and Pendleton. One caveat: Owners of the Versa 2 will not be able to switch in their bands, as they work on an older system.

As modern-looking as I found the Fitbit Versa 3, I still wasn’t struck by why it should be significantly more expensive than smartwatch fitness trackers like those made by LETSCOM and Willful—brands that sell for $150 to $200 less than the Fitbit and still look good. Once I started exploring the Fitbit’s functions, however, it made sense: the options felt seemingly endless. The Versa 3 can support up to 39 installed apps at once, allowing it many independent functions that go well beyond tracking steps, etc. Catch “New York Times” headlines, call an Uber, check the air-quality index, play some games—you name it. Of course, navigating all of these apps on a Versa 3 isn’t as smooth as it is on a smartphone. The touchscreen could definitely be a bit more responsive, as I found myself tapping icons a few times before getting a reaction. The “button” on the side is also a touch sensor that should trigger the display to come on, and I felt it should require a little less press intensity to activate. That said, your fingers quickly get used to finessing the smartwatch and it only proves to be frustrating when super sweaty at the end of a workout.

Setting up the Versa 3 was fast and painless. I charged it for only 12 minutes and was able to get a full day’s use (total battery life is claimed to be up to six days with typical use, though that reduces to two days with always-on display engaged, and 12 hours with constant GPS tracking). I then had to download the Fitbit app on my smartphone, create a Fitbit account, and connect my phone to the Versa via Bluetooth 5.0 (a step up from the Versa 2’s 4.0). Once the two devices were synced, I put on the watch and started exploring. There are several fun and useful apps preinstalled on the Versa, such as Spotify and Deezer music app controls for your paired smartphone, a music player with onboard storage for offline listening, and a Starbucks app where you can access your store card.

The Versa began collecting data automatically as I walked around, which was fun at first and grew more satisfying as I hit high numbers of steps for the day and higher heart rates when I exercised. Seeing my PurePulse 2.0 rate, as well as other activity, prominently on the AMOLED display definitely gave me some incentive to stay active. I started logging my water intake and food intake in the app on my phone, and doing so was easier than a beginner might expect.

One widget that I found very cool was the “Relax” feature, which walks you through breathing exercises and logs your mindful minutes. The phone app has lots of guided meditations that aid with mental health to complement your more trackable physical health. If you’re an Android user, this smartwatch has it all and can go toe-to-toe with a Samsung Galaxy watch. And if you’re not, it’s iOS compatible as well. The Versa 3 is an extremely well-designed product, and the deeper you dig into its features, the clearer this becomes.

The rest of the Fitbit Versa 3 specs

Your Fitbit Versa 3 can be as engaging or as passive as you see, well, fit. If you want text and other phone notifications to display on your smartwatch, you can have them. Alternatively, you can place your Fitbit on Do-Not-Disturb mode and go about your day as though you’re simply wearing a watch, letting it track your activity like a fly on the wall. If you commit yourself to the Fitbit lifestyle, you can learn a lot about yourself. Wearing it to bed allows it to track your light, deep, and REM sleep, and it will even give you a Sleep Score. Should you identify a problem, you can go about working to fix it. For example, smart alarms can wake you during a light sleep cycle, making it easier to start your day feeling well-rested. The Versa 3 can also track the oxygen saturation of your blood, which is a great indicator of general wellness and fluctuations in your health. And the watch is waterproof, so you can even track your heart rate and speed while swimming (or be fine if you’re in a rush and forget to remove the Versa as you jump in the shower). I got caught in heavy rain wearing the Versa 3, and it was completely unaffected.

So, who should buy the Fitbit Versa 3?

The Versa 3 can function as a tool to track simply your heart rate and distance while exercising, but there are simpler, cheaper options for such tools. If you’re committed to wearing this smartwatch for the majority of your day (and night), however, you’ll squeeze a ton more value out of it than any entry-level model. It can help you reach your fitness, sleep, hydration, and mental health goals. It can help keep your phone out of your hand, yet add some convenience to your day-to-day routine. If you need a break from techy-ness of it all, you can use it like a watch and check your stats when you feel like it. Thus far, I’ve enjoyed my time wearing the Fitbit Versa 3. From the corners to the data points, it’s a well-rounded package and is one of the best Fitbit watches to go from workday to weekend warrioring.